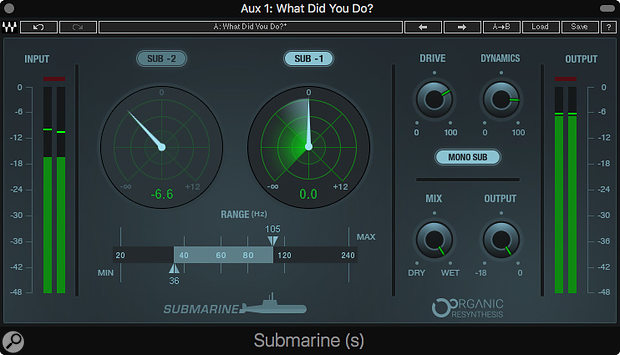 Submarine's role in life is to add natural-sounding sub-bass content to a signal by generating frequencies that are one octave and two octaves lower than the input signal. Further dynamic and drive processing of the resultant sub-bass signal is then possible before it is mixed back into the dry signal. The process works best on individual mono or stereo tracks, such as kick drum or bass synth — if used on a full mix there are often unwanted audible artifacts.

Submarine doesn't change the level of existing frequencies but instead adds the sub frequencies as a parallel process, adjusted using the Wet/Dry mix control. Waves call their process Organic ReSynthesis, and it works by analysing the input signal's carrier, pitch, formant and envelope. We're told that the sub-bass element is then built using these four characteristics, rather than by rectifying or otherwise manipulating the input signal as other subharmonic enhancers do. The fact that pitch analysis is part of the process explains why Submarine is less useful on complete mixes, with their complex blend of pitches and harmonics.

As adding sub-bass can make a signal louder, it's important to set the input level so that there's no clipping at the output, and Submarine includes I/O metering with a peak hold on the output meter to make this easier. There's also an output level control. A pair of triangular slider pointers sets the upper and low frequencies of a pair of steep filters that are used to restrict the range of frequencies from which the sub-bass content is to be derived. These should normally be adjusted so that the fundamental frequency of the input falls between them. The sliders, which can go as low as 20Hz for the left fader or as high as 240Hz for the right one, can be adjusted independently, but you can also drag a box around them and move both together. Drive and Dynamics can then be used to change the character of the sub sound.

There are two sub generators, one delivering an output one octave below the pitch extracted from the band-limited input, and one two octaves below. The levels of each can be adjusted independently or either can be turned off. As you might expect, Drive adds harmonic distortion to the sub signal, while Dynamics brings in compression. If working on a stereo track, you can also decide whether the added sub component should be mono or stereo. Mix is normally used to balance the contribution of the sub frequencies, but if you want to feed the subs to a separate LFE channel in a surround mix, you can set it to 100 percent wet.

In practice, Submarine works well as long as it is used sparingly and only on one or two tracks within a mix. The soloed sub signal may not always sound completely natural but once you mix it below the original signal it sounds very believable and adds a lot of depth to the sound. Of course you need decent monitoring (whether on speakers or headphones) to hear what's going on at sub-bass frequencies, and you do have to take care that you aren't adding too much simply because your monitors can't reproduce the newly added lows. Overall, Submarine is a very useful tool, particularly for beefing up weak kick drums, bass guitars or bass synths, and on most material it sounds far more natural than a conventional pitch-shifter. Dance music producers will love it!