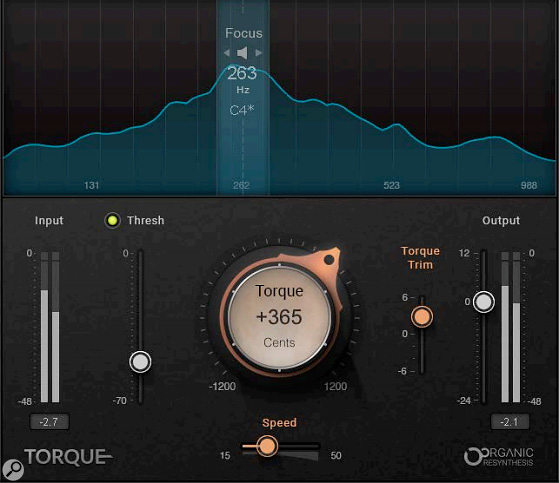 The premise behind the new Waves Torque plug-in is fairly straightforward, as is its operation, but what goes on behind the scenes to make this possible is actually pretty complex. The idea is that Torque lets you retune a drum that’s already been recorded, but without introducing the artifacts that simple pitch-shifting always seems to throw up. It uses an algorithm that Waves call Organic ReSynthesis, which breaks drum and percussion sounds down into their pitched components, formants and so on prior to processing, allowing Torque to process only those elements that need changing without altering those that give the drum its natural character.

The main area of interest is shown on the Focus pitch spectrum display as a shaded band, illustrating both centre frequency and musical pitch, which can be moved up or down the spectrum between 98 and 988 Hz, covering the key area of interest for drum sounds. This can be used to target either the fundamental pitch or harmonic of the drum sound for processing, and clicking and holding the speaker icon lets you solo just the Focus band to help home in on the required region. The manual suggests that good results are often obtained by focusing on the second harmonic rather than the fundamental note of the drum.

The dynamic Focus Display helps locate the resonant peaks in the signal, while the Threshold fader sets the level above which the signal will be processed. A traffic-light colouring system is used by the Threshold LED: yellow denotes a suitable setting, red is too high and green too low. The large Torque knob sets the amount of pitch-shift: this is displayed in musical pitch rather than frequency, and can be up to an octave in either direction. Torque Speed changes the attack and release times of the processing and is best adjusted by ear to match the dynamics of the drum being treated. A Torque Trim control to the right of the pitch knob helps tame low-frequency build-up by adjusting the level of the processed part of the sound over a ±6dB range: increasing Trim results in a thicker sound, while lower settings thin out the sound. Output Gain compensates for level changes and meters are provided both for the input and output.

While Torque allows some pretty surgical tweaking of individual drum sounds that are part of a multi-miked, multitrack recording, it is also surprisingly effective when working on complete drum mixes or drum loops, especially at the lower end of the spectrum where you need to add weight. I was also surprised at just how effectively I could retune congas that were part of a fully mixed percussion loop while leaving the overall tonality intact. Setting the Speed control to match the decay of the drum is important here, and if there’s too much low end the Trim control deals with it very effectively. If you need to deal with two different parts of the drum spectrum, then there’s no reason not to use a second instance of Torque.

It is possible to run into trouble when trying to achieve radical retuning in the toms region with an already mixed drum track, especially if it contains some reverb or ambience, as the results can start to sound a little synthetic, in which case using the Trim control, careful adjustment of the threshold and a sensible amount of pitch retuning helps moderate things. Larger pitch-shifts are probably most useful in adding weight to kick drums and the like, while more moderate shifts can yield good results with toms and percussion, even in fully mixed drum tracks and commercial loops. Certainly the results can sound much more natural than what you get from simple pitch-shifting, but equally, some of the results achieved by deliberately pushing things too far can interesting in their own right, so a bit of creative abuse is not off the table. The fact that Torque is so easy to operate is also a huge plus. The included ‘live’ version also permits delay-free processing, which could also win it a lot of friends.