Available as a native plug‑in supporting all the common Windows and Mac formats plus Waves' own Soundgrid platform, Vitamin brings together some of the 'secret' tools used in contemporary music production. There's little detail on offer in Waves' description, but enough to suggest that the process combines parallel compression with a subtle degree of harmonic‑enhancing distortion. The amount of processed sound added to the dry signal can be adjusted independently for each of five frequency bands, and the crossover points between bands may also be adjusted. However, the only way to change the amount of compression or saturation being applied is by adjusting the input level knob to change the amount of drive — the five main faders simply give you more or less of what sits in each frequency band. When used in stereo mode it is also possible to change the stereo width of each band, something I find very useful as it lets you keep the low end narrow while spreading the mids and highs.

Multi‑band harmonic/dynamic processing is nothing new in itself — Drawmer's rackmount Masterflow mastering processor offered that many years ago and also provided separate stereo width controls for each band — but putting compression and harmonic generation into a parallel format results in a powerful and musical‑sounding finessing tool that works as well on mixes as it does on individual tracks. To achieve the same effect using conventional plug‑ins or hardware you'd need to set up a ridiculously complicated parallel chain of crossover filters, EQ, compression and distortion. 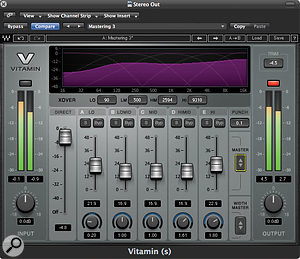 Vitamin's plug‑in window includes the familiar Waves toolbar where you can save and load presets, compare between two lots of settings, Copy, Paste, Undo and so on. A useful selection of factory presets is included. A purple spectrum curve occupies the top of the screen to show what is being added and where, and the contribution made to each band is governed by a gain fader with a 48dB range. There are also input and output level faders to compensate for level changes caused by the processing and to ensure an optimum input level.

Four crossover frequency controls, each covering the range 20 to 18000 Hz, are arranged above the gain faders to allow the user to set appropriate band coverage for different applications. Solo buttons make it easy to evaluate exactly what each band is adding, and to audition the range of frequencies that an individual band covers while adjusting the crossover points. Bypass mutes only the processed part of the signal, though you can use Solo and Bypass at the same time should you need to hear just the direct part of that band's signal.

The stereo width controls are located below the faders, and are only visible when the stereo version of the plug‑in is instantiated. The widening process affects both the dry and processed part of the signal for the relevant band. When mastering, I often make the extreme lows mono so that the bottom end of the mix will sound the same whether played in mono or stereo, and this plug‑in makes that task simple. The width can be adjusted from mono to extra wide, with the mid position being normal. A separate fader allows the dry sound level to be adjusted.

Any heavy dynamic processing can detract from the clarity of transients, though parallel compression has less of a tendency to do this than conventional in‑line compression. In order to maintain clarity, the control section includes something called Punch, which either enhances or reduces transients in the processed part of the signal in a manner conceptually similar to the attack side of SPL's Transient Designer. The Punch value can be varied along a scale running from 1 to 5, where 3 is the mid (do nothing) position. There are also master controls to scale the amount of added processed signal and the stereo width by moving all five sets of controls together.

Using the plug‑in is pretty simple, and though Waves suggest picking a suitably close preset and then tweaking it, starting from scratch isn't at all difficult. If the lows need pumping up a bit, it's probably the sub‑150Hz region that needs your attention, while the high bands can add a sense of air and glitter to the sound. Where the mid‑range needs adjusting, as may be the case with vocals or the radio‑friendly part of the bass guitar's spectrum, the middle bands are where you need to be, though it can take some experimentation to find out where to set the crossover points to gain the best subjective results.

Used with care, Vitamin can be applied to just about any sound source, from delicate acoustic instruments to processed rhythm loops. The Punch control helps keep the transients sounding fresh and detailed — though it can also help soften harsh transients too if turned down. Though the use of harmonic generation implies some kind of distortion mechanism, there's really no sense of the result being in any way dirty‑sounding, unless you really push up all the faders, and even then, the outcome is more musical than you might expect. The more I worked with Vitamin, the more I came to recognise its strengths and to appreciate its versatility. As with any powerful tool, you have to exercise a degree of restraint, but all in all, this is a really useful plug‑in to have at your disposal when mixing or mastering.

I know of no single plug‑in that does exactly what Vitamin does. Multi‑band harmonic enhancement is possible in some distortion plug‑ins, such as FabFilter's Saturn, while multi‑band stereo widening is on offer in Blue Cat Audio's MB7.