It's not the cheapest PC around and it's not the most powerful, but this machine might just help you make better recordings. 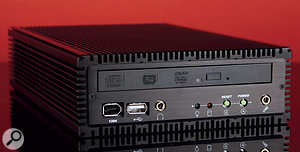 When we review computers in Sound On Sound, it's usually in the context of an arms race. Each new generation of technology yields more speed, more power and a greater storage capacity, all of which are crucial to those running large disk-streaming sample libraries or dense mixes with lots of plug-ins. So you might well ask why I've chosen to write about the WS645F, a Windows PC with a specification that could politely be described as 'dated'.

The answer lies not so much in the features this machine has, as in what it lacks. The WS645F has no cooling fan of any description, and is available with a solid-state drive: two attributes which should, in theory, make it completely silent in operation. And unlike all the other fanless PCs I've been able to track down, it has a built-in Firewire 400 port as well as three USB2 ports, allowing it to work with the huge range of audio hardware that still uses this connection protocol.

I was driven to embark on my search for a portable, fanless PC by the demands of location recording. I don't always want to remove my recording equipment to a separate room, and often it's not feasible to do so; yet conventional laptops, desktops and rackmounting PCs within a recording space invariably produce a degree of fan noise and hard-drive whirr. This is not usually a problem if you're tracking a metal band, but is very definitely a problem with a string quartet or solo folk singer. Nor is it a problem confined to computer-based recording: dedicated hard-disk recorders are, for the most part, noisy too, and in any case, I don't want to forgo the obvious advantages of using a computer just because I'm not working at home!

In theory, then, the WS645F offers a number of advantages, especially if you already own Firewire recording interfaces, as many of us do. It's available either as a 'bare bones' system or in a number of different configurations, based around either an Intel Celeron or Core 2 Duo CPU. The most powerful option is the P8600, which is clocked at 2.4GHz. Up to 4GB of RAM can be accommodated, and as well as Firewire and USB, connectivity includes VGA, RS232, Gigabit Ethernet and two PS/2 ports. There are no slots for internal expansion; nor are newer connection formats such as USB3 or Thunderbolt catered for. Power comes from an external 12V supply, meaning that it could, in theory, be supplied from batteries if need be. The review machine was supplied with Windows 7 64-bit pre-installed.

The PC's graphics and keyboard/mouse ports, and two of its USB connectors, are mounted on the back panel.

Although compact, the WS645F patently is not the world's smallest PC: its smart black metal case measures roughly 10 x 6 x 2 inches. (To be fair, the company also sell other machines that really are minuscule, so the name is not inappropriate!) It's still smaller than a conventional laptop, but of course is less easily portable, as it requires an external keyboard, mouse and monitor. The colour and the ribbed design are intended to make the case an effective heatsink, and it appears to perform this function very well — even after being on all day it was barely warm to the touch.

The advantages of a solid-state drive are obvious as soon as you press the power button: booting and program launching are extremely snappy. I had no problems running Presonus' Studio One v2, but was unable to even install Pro Tools 10, as the installer claimed that the detected 1.93GB of physical memory was insufficient to run it. The onboard graphics seemed a tiny bit fuzzy with the old TFT monitor I scavenged — at least, compared with the computer I scavenged it from! — but I wasn't intending to run Call Of Duty on it anyway.

I was pleasantly surprised to find that the Firewire connector is the larger six-pin type rather than the miniature four-pin version used on many laptops. This means that it should be able to supply bus power to hardware that needs it, though I didn't have any bus-powered Firewire hardware to test this. More importantly, it forms a more robust and secure connection that is less likely to come unplugged in the middle of a take. (I have had this happen on several occasions with laptops.)

The all-important Firewire controller chip set turns out to be a Lucent/Agere model: not the fabled Texas Instruments chip set recommended by every audio manufacturer, but one of the better alternatives, and certainly a massive improvement over the Ricoh chip set in my Dell laptop. I had no problem running either Firewire interfaces (an M-Audio Profire 2626) or USB ones (a new Steinberg UR824) with buffer size set to 256 samples, even when I deliberately tried addressing all 24 inputs and outputs on the latter simultaneously. In other words, the number of tracks you can record and play back at once will be limited by your recording hardware and the Firewire 400 bandwidth rather than any feature of the PC's own spec, and should be plenty for general-purpose recording work.

For a real-world test, I took the WS645F, the Profire 2626 and my Focusrite ISA828 preamp on location to record SOS's own Nell McLeod, who is a rather good folk singer. Compared with working on a laptop, it was a revelatory experience. I could hear distant birdsong coming in through the roof. I could hear preamp hiss on my old stereo ribbon mic. I could hear floorboards breathing and clothes rustling and headphones creaking. If I'd listened hard enough, I could probably have heard grass growing and planks warping — but the computer itself was completely, utterly, absolutely inaudible. If you wanted to, you could mount a mic right next to it, and you'd pick up nothing but reflections off the case. 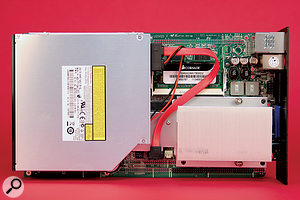 Here you can see the massive metal heatsink (lower right) through which CPU heat is conducted to the metal case.

I imagine that many of us will baulk slightly at the idea of paying £700-plus for a new computer that struggles to match the spec of a modest laptop from a couple of years back, but considered purely as a recording system, I think the WS645F might actually represent good value for money, especially if you already own Firewire hardware.

For comparison, the only hardware multitrack recorders I'm aware of that can operate completely silently are the Zoom R16/24 and the JoeCo Black Box Recorder (which can be specified with a solid-state drive). The R16 is a really neat piece of kit and very affordable, but limited to recording eight simultaneous tracks, and not sonically in the same league as a typical Firewire interface. It also has no digital I/O and only a single output pair, so can't be used to easily generate cue mixes for performers, while phantom power is available only on two inputs. It's great, but it's very definitely a tool for home recording rather than professional use.

Depending on configuration, meanwhile, the Black Box Recorder will set you back well over £2000, and in any case is mainly designed to interface with a mixer for recording concerts, so lacks some of the functionality you'd want for location work. Other 24-track machines available include the Alesis HD24, Fostex D2424 and iZ RADAR (the Mackie SD24 appears to be discontinued), but these have hard disks and fans, so are not silent. And let's not forget that there are a lot of advantages to working on a PC, not least that you can label tracks and files, set up monitor mixes, easily work to backing tracks, create rough mixes as you go along, and inspect waveforms as they are going to disk. Who wouldn't rather be greeted at the mix stage by a properly organised and labelled DAW session with meaningful track names, instead of a series of numbered WAV files?

The solid-state drive fitted to the review machine is just visible in this shot below the DVD writer at the right-hand side.What, then, of other computer options? Unless I missed something on my lengthy trawl of the Internet, the WS645F is literally the only ready-built computer available in the UK that is fanless, available with a solid-state drive, costs under £1000 and is equipped with Firewire. If absolute silence is a prerequisite, one alternative is to build your own fanless PC in a similar case: possible, but not for the faint-hearted, and not likely to work out a great deal cheaper. Another is to buy a budget laptop or something like an Apple Mac Mini with a solid-state drive and attempt to quiet or eliminate the onboard fan. This too carries its share of risk, and might not yield a completely silent machine. Finally, you could replace your Firewire interfaces with USB ones — not that there is a huge selection on the market — and look for a cheaper silent PC that just has USB. This, too, is unlikely to work out cheaper than the WS645F.

If you're used to working with laptops, I can't stress enough how much of a difference it makes moving from 'not very noisy' to 'completely silent'. And while the WS645 might not match current desktops for performance, I'm sure there are many people out there who will get along just fine using a machine of this spec for editing and mixing as well as recording. It's not glamorous and it's not 'future-proof', but of all the products I've reviewed in the last couple of years, the WS645F is the one I'm most tempted to part with cold, hard cash for.

The selling point of this machine for SOS readers is that it can record multitrack audio without making any noise whatsoever — and if that's important to you, it could well be the most affordable and flexible way of doing so.

Price varies, but system as reviewed £716.40 including VAT at the time of writing.