Study photos of recording sessions from the ‘60s and ‘70s, and you’ll often look in vain for a microphone shockmount. Even high–end capacitor microphones from the likes of Neumann and AKG were typically supplied not with elastic cradles, but with simple screw fittings that attached directly to a mic stand. Spider mounts were expensive optional extras. 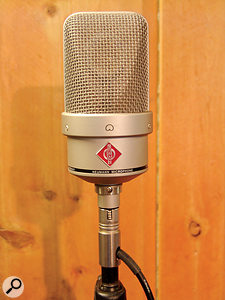 We are now lucky to live in an age when very effective universal shockmounts such as Rycote’s InVision range are widely available, and many of us use them as a matter of course. However, they do have their negative aspects. Shockmounts take time to rig, they’re visually obtrusive, and the larger ones can make it difficult to position mics exactly where you want them. And if your taste in microphones runs to the obscure and vintage, it can be hard to find models that actually fit all your mics.

Stewart Tavener, who trades as Xaudia, is among the UK’s leading experts on obscure vintage microphones, and his core business is mic restoration and repair, which he does extremely well. However, he also makes several interesting and useful products, including a range of hexaphonic guitar pickups and transformer boxes for interfacing old mics with modern studio kit. His latest is the Mount–A–Mic, a brilliantly simple and affordable problem–solver for situations where a mic needs to be attached to a stand and no mount is available.

The Mount–A–Mic is a specially machined metal thread adaptor which mates with the back of a female Neutrik XLR connector. The mic cable exits from a hole in the side of the adaptor, which terminates in a 5/8–inch threaded socket that can simply be screwed onto the end of a mic stand. In effect, the Mount–A–Mic thus makes your mic an extension of the stand’s boom arm. You can buy it as a complete cable, or as a DIY part with or without the XLR connector.

I was initially nervous about the idea of having my mics attached to the stand only by the XLR connector, but it’s a locking connector and actually provides plenty of support, even upside–down (although this is not recommended). Even with a large, heavy mic such as a U87 or RE20, I found I could position the boom at any angle with perfect confidence. Swapping mics is infinitely faster and easier than it is with any shockmount I’ve ever tried, and on a typical concrete–based studio floor, stand–borne noise usually isn’t a problem. There will be occasions where you need the flexibility of a clip or mount that can be angled, for instance in close–miking drums, but for the majority of situations, the Mount–A–Mic is an effective, universal and above all simple studio problem–solver.