We put the largest models in Yamaha’s new DBR range to the test at a real-world gig, where they proved more than equal to the task.

The DBR range was introduced last year, and offers an affordable route to ownership of Yamaha’s well-established and very popular ranges of self-powered portable speakers. The existing (and higher-priced) DXR and DSR ranges have proved very successful, and the DBR speakers inherit some of the technology developed for their more upmarket relatives. The available DBR models are all full-range powered units based on the classic two-way driver format, with 10-, 12- and 15-inch woofer options.

As with the DXR and DSR ranges, the power amplifier modules are common to more than one model — the DBR12 and DBR15 reviewed here share the same amp power, DSP and control functionality. The amplifier is rated at 465W (continuous), of which 400W is for the LF section and 65W for the HF; the ‘dynamic’ ratings are 800W (LF) and 200W (HF), making a nominal 1000W total amplifier power per speaker. HF dispersion is 90 x 60 degrees (horizontal x vertical) and the crossover frequency between the 12-/15-inch woofer and the one-inch-exit HF driver is 2.1kHz. The peak measured acoustic output is 131dB SPL for the DBR12 and 132dB SPL for the DBR15, so both speakers are capable of producing a respectable output level — as I found out when I tested these speakers in a real-world situation. 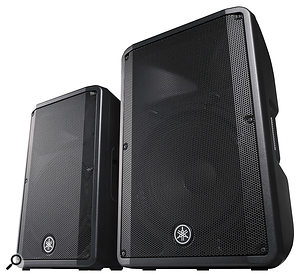 filter technology found in the DXR/DSR ranges — there’s more information about these on the Yamaha web site (and a lot of general information about FIR filters on the wider web), but essentially this means that the crossover filter has a constant delay characteristic at all relevant frequencies, and therefore does not introduce distortion due to phase differences around the crossover point.

On the back panel the DBRs offer two inputs with independent level controls to provide a basic mixer function. Both inputs have balanced Combo jacks, which accept either TRS or XLR plugs; channel 1 has a sensitivity switch that sets either microphone or line level, and channel 2 is equipped with a pair of unbalanced RCA phono inputs, which are summed internally. The mix functions are basic (there’s no EQ facility), but it is a useful feature and would be ideal for solo performers using playback devices, or where a simple public address system is required. A balanced XLR output is provided, and this can be switched to send a direct link from the channel 1 input, or the 2-channel mix output onto another speaker or system. A three-position high-pass filter switch cuts the low frequencies at either 100 or 120 Hz (depending on what subwoofer is hooked up, or how you want to run the system), or it can be set to ‘off’ for full-range use. The ‘D-Contour’ selector applies one of three preset EQ configurations depending on the application; it can be switched out altogether, or set to the ‘FOH/Main’ or ‘Monitor’ positions, the former position boosting both the highs and lows, and the latter cutting the lows to minimise boominess. This processing operates dynamically — it responds to the signal going through the amp, and applies varying degrees of EQ cut and boost depending on the switch setting. Overall, the DBR control panel is clearly laid out, with all the controls being either obvious in function even to an inexperienced user, or assisted by some helpful graphics that illustrate some of the functions.

The DBR speakers are similar in size and shape to the corresponding models from the DXR range, but have a different grille design that is more enclosed, and without the wraparound edges. (On the DBR models the grille sits further ‘inside’ the moulded edges of the cabinet, which suggests that they would withstand some rough handling without losing their looks.)

These moulded plastic enclosures incorporate 50-degree surfaces for using the speakers as floor monitors — in the case of the DBR12 and DBR15 these angled side panels are symmetrical so that the speaker can be positioned either way round, ie. with the HF waveguide to left or right when in ‘landscape’ orientation.

I like the compact and neat overall appearance of the DBR speakers, and they do look perfectly at home either on the floor used as wedges or as main speakers — and that goes for both the 12-inch and 15-inch versions. The other pleasant ‘unboxing’ surprise comes when you pick up these DBRs for the first time: they are surprisingly light and very easy to handle, so much so that I had to check the specifications to see if Yamaha had craftily sneaked in a neodymium driver or two, which they haven’t, and which makes the light weight even more impressive. I believe it has a lot to do with the new amplifier and power-supply design.

I generally try to ask as many people as I can for their opinions on review gear, and I can attest that everyone — crew and studio visitors alike — who handled the speakers (especially the DBR15) commented on the light weight, and the fact that ‘they look much heavier than they feel’.

I had intended to set the DBRs up in the workshop and give them a good workout before going out on a real job, but time somehow slipped away and I decided to use them for an outdoor town-centre event, which included two stages. The DBR15s would provide the sound for the main stage and the DBR12s would be used on a smaller stage in the next street.

We had very limited setup time and, as the second stage performances were scheduled to begin first, I sent my crew of two to set up the DBR12 system while I rigged up the main stage, using DBR15s on poles atop a pair of (non-Yamaha) subwoofers at the front edge of the platform. At this point I really appreciated the DBR15’s light weight and sensible handles, and I was able to get them in position without any difficulty at all. I wired in the subs, but I had some time to run the DBR15s in full-range mode on their own, just to see what they were like — and ‘like’ was definitely the word of the moment. The DBR15s sounded very full, with a warm bottom end and an abundance of clean power that was more than enough to fill the street scene with sound, so much so that I didn’t even bother turning the subs on, as we weren’t expecting any real bottom-heavy material.

For speech, recorded tracks and live singing, the DBRs performed very nicely indeed, and I was reminded of why I liked the DXR speakers so much when I reviewed them a couple of years back — all that smooth, un-hyped sound was there even when running at high volume levels. The DBRs just didn’t exhibit any harshness or unpleasant top end, no matter how loud I ran them, and there was more than enough output power on tap for the audience of between 200 and 300 people in front of the stage. 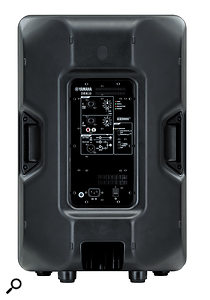 The DBR speakers can accommodate mic or line signals, and feature both a high-pass filter and dynamic EQ functions for either front-of-house or monitor use.This was one of those community events where the mixing desk couldn’t be out front, so I was controlling the sound from a position directly behind the stage; when the crew returned from the other stage I took the opportunity to walk around in the audience area, and I was very pleased with the clarity and coverage of the DBR15s. When the event wrapped up, de-rigging the DBRs was as quick and painless as putting them up, and it’s at this stage in the proceedings that I really do appreciate gear that is easy to handle. I didn’t get the chance to go and listen to the DBR12s in action, but the guys reported no problems either in setting up or operating the system, and the event appeared to have been a problem-free experience for all of us!

Home On The Range

A couple of days later I set up both pairs of speakers in the studio and played various recorded tracks, both with and without (non-Yamaha) subs. I started off by listening to my usual test tracks through the DBR12s alone, which were positioned just above head height and were standing directly on a pair of subwoofers and a pair of dummy cabs just to achieve the height. The DBR12s sounded much as I had expected — clean, clear and with plenty of power available, which handled some dynamic and uncompressed recordings (including some very dramatic film scores courtesy of the Cincinnati Pops Orchestra, which is always good if you need to exercise your neck hairs) most acceptably.

The D-contour modes do exactly what the manual says, and I also tried the DBR12s in floor-monitor position using the appropriate contour setting. With the speaker positioned at the foot of a mic stand I was able to achieve very good vocal levels without any honking or other nastiness. Switching to the larger DBR15 units, in exactly the same position with the horn waveguides just above head height, I was surprised and impressed by the difference in low-end performance. These boxes really do have a warm and full bottom-end sound, and I suspect that the overall DSP tunings have more than a little to do with this — it’s not just a question of having a bigger woofer and a slightly larger cabinet volume. Subjectively, I couldn’t hear any difference in the upper-mid-range and HF content between the two models, but whereas the DBR12s had a respectable, tight, low end, the DBR15s really pump it up in that region, and would be ideal as a one-box solution for most smaller band and DJ rigs. When I introduced a subwoofer into the equation, the DBR12s took off, and this was where their tightness and clarity stood out; adding subs to the DBR15 setup certainly increased the overall system capability and would be a sensible way to go in a bigger room, but I have to say my favourite combination, after several hours of listening in a relatively small space, was just the DBR15s on their own. They sounded so well balanced and full, and I was left with the impression that I could listen to them all day without any fatigue setting in. And they’re light!

I confirmed these opinions when I used them at a full-on rehearsal with my 18-piece band in a fairly lively hall, where the vocals came through particularly well and without any of the top-end unpleasantness we sometimes suffer from in that venue, especially without an audience in place. Later that week I took the DBR15s out into the paddock beyond my studio and gave them a good hammering, throughout which they just pumped and thumped happily away, producing a very respectable level whilst maintaining the warm, clean sound I’d experienced during the indoor test.

I liked using the DBR12 and DBR15 speakers. They are powerful enough for small-to-medium live-sound gigs, have a pleasing smoothness and warmth to the sound even when driven hard, are lightweight and easy to handle, and they make great stage monitors — and if any or all of the above appears on your speaker wish list then these have got to be worthy of serious consideration.

If you’re reading this, you will probably be well aware of what’s out there — it’s a crowded market sector and there are plenty of products available, including the JBL Eon range, DB Technologies’ Opera series, the RCF Art speakers, Mackie’s SRM and Thump line-up, the EV ZLX range and Behringer‘s Eurolives.

These active speakers are compact and affordable, yet deliver a clean, smooth sound even at high levels.