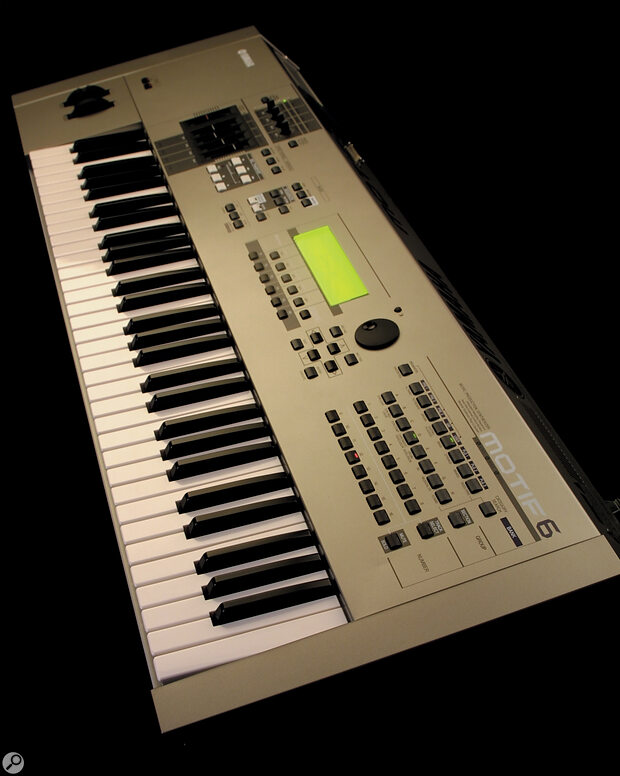 Rumours of a new Yamaha synth were circulating at January's NAMM show, but nothing was confirmed until a few weeks later, when SOS were invited to Yamaha's London R&D Centre. Matt Bell meets the Motif...

Those of you who read last month's NAMM show news may recall the brief closing reference to a new Yamaha workstation. At the time, we had been told little more than the new synth's name and that it would be launched at the Frankfurt Musikmesse. Shortly after NAMM, however, Yamaha invited us down to their UK R&D Centre in London to check out the Motif for ourselves.

In price, looks and capabilities, the Motif is clearly designed to be Yamaha's response to Korg's top‑of‑the‑range Triton workstation. The new synth is a 16‑part multitimbral, 63‑note polyphonic AWM2 sample‑and‑synthesis workstation with a built‑in 16‑bit, 44.1kHz sampler. It will be available in three different models: the 61‑ and 76‑key unweighted Motif 6 and 7, and the 88‑key weighted‑action Motif 8. Four assignable sliders and four knobs are provided for real‑time, hands‑on control, as well as the usual pitch and mod wheel.

Yamaha's move back to a wholly sample‑based synthesis engine is interesting. The company's previous top‑end EX workstations additionally incorporated some AN‑style physical modelling, but apparently the feeling at Yamaha is that this approach "confused" the market. Nevertheless, Motif sports three rear‑panel PLG expansion slots, so an optional AN (or indeed a VL or DX) sound engine can still be added if the user desires. 84Mb of built‑in wave ROM comes as standard, while the default user sample RAM is a scant 4Mb, expandable to 64Mb with standard SIMMs. Navigating your way around all these potential sounds is made easier by the inclusion of a patch‑finding function, and a 'Master' bank, in which favourite sounds, key splits, or multitimbral Performances can be stored.

The sampling engine is related to that seen in the A‑series samplers and RS7000 sampling workstation, and, like the latter, the Motif incorporates a Recycle‑style loop slicer and resequencer. Much of the built‑in sound‑shaping technology, such as the filters and effects, is also derived from the A‑series.

No floppy drive is included for sample storage; instead there's a Type II SmartMedia card slot, and a built‑in SCSI connector so that external storage drives can be attached. Four analogue outs (one main L‑R pair, and one pair of Sub outs) are provided as standard. There's also a pair of inputs to access the sampler, and provision for an mLAN I/O expansion option. A built‑in USB port permits direct connection to computers, and the Motif will ship with MIDI maps and controller templates for easy integration with Cubase VST and Logic.

At the time of my visit, the Motif was not finished, and the final factory set of 640 presets was not complete. Nevertheless, Yamaha demoed a selection of top‑quality bread‑and‑butter sounds — beautifully sampled strings and solo orchestral instruments, punchy basses (including some fine stand‑up acoustics alongside the analogue synth‑derived tones), and realistic organs and pianos (the latter taken from Yamaha's top‑notch PSR9000 Pro). There were plenty of dance‑friendly basses and leads, too.

But that wasn't all. I was also treated to a range of highly individual, experimental presets, designed by R&D Centre employee James Thompson. James has been of the opinion that synth presets have been too 'safe' for years, and is seeking to partially redress the balance. Many of his sounds would not have been out of place on one of Spectrasonics' Distorted Reality CD‑ROMs, and took full advantage of the Motif's control sliders and assignable knobs, allowing a great deal of sonic strangeness to be exacted from just one factory patch. Evolving, screeching metallic tones were overlaid with jangling partials, and curious, ethereal pads mingled with what sounded like ring‑modulated wind chimes. I could imagine many of these being a big hit with soundtrack composers or the sample‑based experimental techno brigade, and was impressed by Yamaha's willingness to experiment.

By the time you read this, the Motif will have had its launch in Frankfurt, and it is expected to start arriving in shops worldwide in July. We'll be bringing you a full in‑depth review in SOS as soon as we've tested one.

The exact prices of the Motif workstations are not yet confirmed, but the following 'guesstimates' are expected by Yamaha‑Kemble to be close to the final figures.