Vocal Foundry is Zero‑G's follow up to Vocal Forge, and it offers similar content: a series of vocal construction kits, each containing all the elements for constructing a full, song‑based lead vocal, including all the backing and harmony parts. A vocal 'toolkit', with a series of additional vocal samples, is also provided, and includes scratches, vocal beatboxes, various spoken phrases, and a whole bunch of processed vocal, all suitable for adding some ear candy to a track. 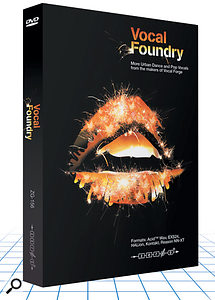 But Vocal Foundry differs from the earlier release in several ways. First, while the urban/dance style still dominates, this collection is more diverse. Second, it's not restricted to the Intakt‑based format, with Acid, EXS24, HALion, Kontakt and Reason's NNXT all supported. Third, it has about twice the sample data (2.5GB). Finally, it's also considerably less expensive.

The wider range of styles is a welcome development. I could still imagine the clubland-friendly vocal 'Forever Loved' going down a storm on the dance floor, but 'Leaving' (also a female lead) has a nice mainstream R'n'B feel, while the male vocal 'Lose Control' ticks all the right hip‑hop boxes. Vocal Foundry also strays into other territory. For example, the rather beautiful sounding male vocal on 'Hurricane' is more Simon and Garfunkel than Beyonce and Jay‑Z; the female‑based 'Sun Goes Down' could be taken from a Dido session, and both 'You Said' and 'When You Come Home' are straight, gentle pop. One or two kits are perhaps less successful (like the rather odd lyrical content of the rapped 'Bars On My Phone') but there's also the occasional genuine comedy moment: 'Say It With Honour' includes the lyric 'I have more flavours than Nesquik' (classic!) but it's actually a very nice female rapping workout.

As with Vocal Forge, the main issue with here is how many different songs you might build with the 16 kits provided. Anyone who owns this sort of library is always going to be constrained by the lyrical and melodic content. And while the 'guide' mixes are useful for auditioning purposes, working with this type of material is more of a remix task than song‑writing from scratch. Despite this obvious limitation, though, Vocal Foundry is fun to work with, and if you liked Vocal Forge, this more diverse take on the same approach should please you. John Walden