The H4 remains one of the most flexible of the current crop of portable 24‑bit recorders, but Zoom have found plenty of room for improvement — and, more importantly, they've used it. 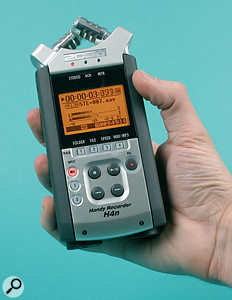 Zoom's H4 digital stereo recorder remains hugely popular and, despite a few reservations, is one of my favourites. With 'combi' jack/XLR inputs, 48V phantom power, a coincident stereo pair of mics onboard, and masses of extra functionality (from four‑track mixing to guitar effects and a USB audio interface) it's much more versatile than most recorders, and the sound is good for the price. The H4's preamps could be better, navigating the menu can be fiddly, the casing might be a bit more robust, and so on, but on balance it's an excellent portable recorder.

It should come as little surprise, then, that Zoom are continuing to sell the H4, while releasing an improved model that addresses many criticisms made of the earlier model. The H4N comes in at a slightly higher price but, like its sibling, boasts a feature set that makes other recorders look positively lightweight.

The H4N's body has a thick, rubberised coating, which tackles concerns about handling noise pretty effectively — not to mention making the whole device feel more solid, better weighted, and altogether more 'professional'. If you do find handling noise an issue, there's a camera‑tripod mounting socket on the rear, and a separate mic‑stand adaptor for this. If noise is still a problem, there's an optional remote control that plugs into the main unit via a mini‑jack on the left‑hand side panel.

Other striking visual changes include a slightly clearer screen (the one on the H4 was already pretty good) and a new control layout. Gone are the rather fiddly controls of the H4: you now have dedicated transport, input‑ and track‑selection controls on the front panel; and the mystifying two wheel/button menu controls of the H4 have been replaced with a more intuitive system based around one menu button and a single scroll‑and‑click selection wheel. The track-selection buttons double up to provide shortcut keys for some of the more commonly used functions — folder and file selection, playback speed (yes, you can slow down tracks, without pitch change, to learn your guitar licks), and recording format. The recording level and playback volume settings are controlled by dedicated buttons on the right and left panels respectively.

At the top are more solid‑feeling mics than appeared on the H4. These are, again, configured for coincident stereo recording, but can be rotated between 90 and 120 degrees. Combi sockets on the bottom panel allow the connection of external mics, or line/DI sources, and these sockets can deliver 24V or 48V phantom power. The preamps have been upgraded; they're not high-spec by studio standards, but are perfectly adequate for this sort of device. You can also connect a stereo mic via a mini‑jack socket (with plug‑in power), to use instead of the onboard mics.

As well as the line/headphone output, there's now a small speaker on the rear. This isn't for serious monitoring, of course, but it's a useful addition that brings the Zoom into line with more recent competition. It means you don't always need to use headphones or external speakers to check things are operating as they should, or to locate a specific track or location within a track. Power comes in via the included adaptor, or a pair of AA batteries.

Like the H4, you can record in different file formats, with a range of MP3 and WAV options, from the cruddiest, media-efficient MP3 to 24-bit, 96kHz WAVs. Usefully, you can record broadcast WAVs, with markers for use when navigating or editing audio files, or burning CDs. All this is recorded to SD card (a 1GB card is included).

The controls of the Zoom H4N — particularly those on the side panels — are much more intuitive to use than those of its predecessor, the H4.

The H4's four‑track mixer enabled you to do basic overdubbing, and to apply effects to your recordings, but despite having two mics and two external inputs, it wasn't capable of simultaneous four‑track recording. With the H4N, you still get a multitrack mixer, but the onboard mics and external inputs can be used simultaneously. Because the onboard mics are configured for stereo, your four-track options can seem limited, but you could bypass them using the mini‑jack input and a splitter cable for a pair of battery-powered mono mics. Even without this, there are plenty of possibilities. A number of applications are suggested in the detailed manual, and there is plenty more potential. Capturing jam sessions in stereo while, say, DI'ing keyboard and bass/guitar parts, is easy; or you could similarly take a feed off an FOH desk and DI a couple of instruments or set up a pair of ambient or audience mics to give you more options in post production. It also opens up the possibility of surround-sound recording, and it might prove useful for applications such as impulse-response capture.

Putting the H4N into four-track mode is as simple as clicking the menu button, scrolling to 'Mode' and clicking, then selecting '4CH' and clicking again. A similar approach is used to set it back to stereo. There's also an 'MTR' multi-tracker mode, which allows you to record mono or stereo sources to each of your four tracks, apply effects to and balance those tracks, and create a stereo bounce.

There's plenty more on offer too, from compressors and low‑cut filters, to guitar amp and cabinet emulations (not the most authentic out there, but certainly passable for demo purposes), and distortion and delay‑based effects.

As with so many of Zoom's products, there's literally too much to go into in detail in a review of this length, and I'd recommend visiting Zoom's web site if you're genuinely curious about the range and quality on offer. Suffice it to say that I've called these functions 'bells & whistles' as I suspect they won't sway most people's decision to purchase. Even if you don't plan to use these sort of facilities for mixing, they do provide a convenient means for headphone-clad guitar and bass practising.

One really useful 'whistle' is the four‑in, two‑out 24‑bit, 96kHz-capable audio interface capability, and you even get a copy of Steinberg's Cubase LE4 DAW software for Mac and PC thrown in — which makes the package more than enough to get a would‑be home recordist started. It wouldn't be my first choice as a hardware interface (this is, after all, designed with location recording applications in mind) but it's certainly very usable.

In terms of ergonomics and functionality, then, the H4 has undergone quite a transformation to acquire the extra 'N' (which stands for 'next' — probably my only real gripe!). But what of the sound quality? Well, that's improved too. Tackling the handling-noise issues of the H4 and upgrading the external mic preamps makes quite a difference. Using the preamps with a pair of AKG C451s, I was able to capture a perfectly usable sound in the studio. The onboard mics are definitely an improvement, and comparable with those on other portable recorders in this price range. The two stereo‑width settings also give a useful option when trying to achieve separation between two sources, or simply recording something like an acoustic guitar part in stereo, while leaving a 'hole' in the middle for a vocal.

I'm a big fan of the H4N, and found very little to dislike about it. While there are more 'professional' portable recorders out there, you'd be hard pushed to find something that's better on sound quality alone. This product is also aimed at a very different market, where it compares very favourably with the competition. The H4N is justifiably a little pricier than its H‑series predecessors, given the improvements that have been made, but although there's a lot of 'bonus' functionality I can't imagine using, you're not paying a premium for it. If you want a good handheld recorder, this should definitely be on your shortlist; and if you want simultaneous four‑track recording thrown in, it will be a very short list indeed!

There are now plenty of stereo handheld recorders, and which is best depends on your own recording needs. If you don't need something as fully featured as the H4N and are looking for a smaller device, you might consider Yamaha's Pocketrack range, or offerings from Olympus and Sony. If you want something of a similar size that allows you to connect external mics via XLR, the Edirol R09H is well worth a look. Zoom's more budget H2 recorder offers four‑track recording, which the others don't.

At its heart, the Zoom H4N is a serious two‑track recorder, where it is amongst the best in its class. The multitrack mixing and four‑track recording functionality — as well as the huge number of other 'bells and whistles' — make it the most versatile, too. A classy upgrade to an already impressive product.