An Introduction To mLAN: Part 4 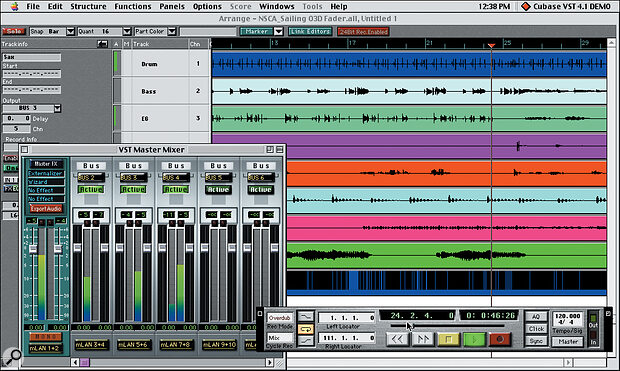 There was quite a buzz about mLAN at the recent American AES audio trade show. Paul Wiffen reports on the latest developments. This is the last article in a four‑part series.

The main mLAN news at September's Audio Engineering Society (AES) show in Los Angeles was Yamaha's announcement of a long‑term co‑operation with Otari to develop the second generation of mLAN (music Local Area Network) chips. These will really start to expand the number of audio channels which an individual device can put on the network.

Those who have been paying attention so far will remember that the first generation of mLAN products we looked at in the third part of this series (October 2000) are all restricted to eight channels (although this fits in with the YGDAI restriction for each interface card on the Yamaha mixers and the typical number of discrete audio outputs current Yamaha synths and keyboards offer). However, the new chipsets coming next year will allow up to 32 audio channels per device, so a next‑generation Yamaha mixer would be able to send 32 channels through a single FireWire port. These chips will also be available to all other manufacturers, as part of the developer program, so we should see synths and mixers with 32 digital inputs and outputs from a wide variety of companies.

AES was also the first time I got a close‑up look at Yamaha's mLAN driver for ASIO, which allows you to send 24 channels in and out of VST, Logic and Vision DSP. As you will see from the accompanying VST screenshot, which our old friend and mLAN development team member Yoshi Sawada very kindly made for me on the show floor, each pair of mLAN outputs is assigned to the active busses in the normal way; the only difference is that they all come out of a single FireWire port on the back of the G4, with no additional hardware of any kind in the Mac. It's a concept I'm still getting used to.

Yamaha took the opportunity at AES to unveil the complete developer program for the expanded mLAN program, including all the extended functions that we looked at in the second part of this series. The attendees at the special launch party at the Wilshire Grand Hotel read like a Who's Who of the music and audio industries, with the likes of Gerhardt Lengeling of Emagic and Manfred Rurup of Steinberg rubbing shoulders with hardware developers such as MOTU, Sonorus, Swissonic and Frontier Design. There was also a fair smattering of PC‑only developers, such as Sonic Foundry, which should allay any fears of mLAN remaining a Macintosh‑only community.

At the same event, Yamaha provided an opportunity for NEC to introduce a long‑distance solution to mLAN networking, called Long Haul, which extends the possible distance between mLAN devices to 400 feet at the 400mbps (megabits per second) speed. At the show this was being demonstrated by running cables up through the convention centre roofing between the main Yamaha booth and their separate mLAN demonstration. Long Haul really opens up mLAN for live sound, show control, and other major public address applications — theme parks and exhibitions, for example. The mLAN party proved that the whole thing is really gathering momentum and that many software and hardware producers are following Yamaha's lead.

But those who don't want to sign up to the Yamaha chipset deal are not left out in the cold when developing mLAN compatibility. Digital Harmony, of Seattle, Washington, have announced a complete development kit to fast‑track IEEE 1394 interfacing. This takes the form of a reference design available to participating licensees, which can be quickly and easily incorporated into products. They have done all the hard work on interfacing S/PDIF, AES/EBU, ADAT, analogue audio and MIDI to IEEE 1394, including circuit design, a parts list and a preliminary protocol suite. The list of licensees already includes Peavey, TC Electronic, QSC Audio, JBL and Lexicon, and more are being signed up as a result of their contacts at the AES show. The Digital Harmony development kit will lead to a slew of FireWire products using this technology in the first quarter of 2001. Watch this space...

Although there were no new mLAN‑interfaced products announced at AES, several companies announced products which use FireWire hardware to carry proprietary protocols. Metric Halo's Mobile I/O, for example, is an 8‑in/8‑out converter box with mic preamps, which has the same size of footprint as an Apple PowerBook and will use FireWire to connect to the computer. It will ship with ASIO drivers for both Mac and PC, supporting transfers at up to 24 bits and up to 96kHz. Mobile I/O will have a retail price of just over £1000 and is expected to ship in March of next year.