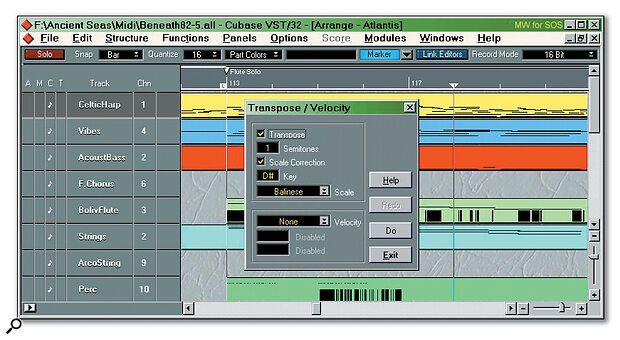 Cubase's Scale Correction feature is part of the Transpose/Velocity window, though it can also be used in the Logical Editor.

The music production software we now use has become so sophisticated that valuable features and techniques can often go unused simply through unfamiliarity. With this in mind, SOS has added new regular monthly columns dedicated to making the most of the leading programs. In this inaugural Cubase Notes, Martin Walker explains the use of the Scale Correction feature.

Cubase's MIDI Scale Correction function has been available since the Atari version of the software and is drooled over by my Logic‑using friends, but I know that many other people are unclear about what it can do for them. The most versatile way to use it is via the Transpose/Velocity window, which can be accessed either from the MIDI Functions section of the Functions menu, or directly using the Ctrl‑keyboard shortcut (this should work on any version of Cubase across all platforms). In the Transpose/Velocity window you can pitch‑shift notes up or down, add or subtract from the current MIDI velocity values, Compress/Expand them to change the dynamics of a performance, or Limit them to fall within a given range. Many people use the Transpose and Compress boxes in the Inspector to make similar changes, but the beauty of the Transpose/Velocity window is that you can select a number of Parts, or even whole Tracks, to alter simultaneously.

Scale Correction is an extra option in the Transpose section, comprising three settings: the Scale Correction tick box, Key, and Scale. Key has 12 options for the different notes in one octave from C going up to B, while you can choose the Scale from a drop‑down list of 22 options. These run from basics such as Major and Minor, through Blues and Whole Tone scales, to exotica such as Persian, Balinese, and Raga‑Todi (a full list is shown in the box). Now, before those not versed in the intricacies of scale structure turn the page, let me point out that you don't need to understand anything about scales to use this feature — you can just use your ears.

I mostly use Scale Correction when I need a little inspiration in the middle of a MIDI song — often I'll have a good section that needs a bit of a lift part‑way through, or I may want to extend an existing section with something a bit different. Using it is a matter of selecting one, some or all of the Parts starting at the desired change point, setting the left and right locators to play the end of the previous section and the start of the section to be modified, making sure Cycle mode is activated, and then starting playback.

Now open up the Transpose/Velocity window, make sure the Scale Correction box is ticked, and then dial in a new key and scale and click the Do button. All of the notes in the selected Parts will now be forced to the nearest note in your chosen scale, and as the song now crosses the Part boundary you'll get a dramatic mood change that will probably surprise you, and may or may not be suitable for further work.

If you write mainstream songs that don't require outlandish changes, make sure you enter the current root note in the key box to keep the notes within the same key. If you're more adventurous, abandon convention and enter anything you like! You can also add a Transpose value at the same time, to shift all the notes up or down for even more drastic changes.

If the change isn't suitable, click on the Undo button to reverse the process and then try further scales or transpose values until you get one that appeals. Unfortunately, in Cubase 5.0 the Show Events part display isn't updated by the Undo button, but the notes themselves are. Always make sure you use Undo before applying a further scale transform, since Cubase still has only one level of undo, and using the main Ctrl‑Z undo function after you exit the Transform/Velocity window won't work. The safest thing is always to save your song before playing with the Scale transform function. Then you can use the 'Revert to Saved' option if anything goes wrong.

A less risky way of using Scale Correction is to open the Transpose/Velocity window from inside an editor — just select the Parts as before, open a suitable MIDI editor, such as the Key editor, and then the Transpose/Velocity window. Carry out your scale correction, and then if you don't like it, close the key editor using the Esc key and all your edits will be abandoned. Repeat the process to try again. Unfortunately the Transpose/Velocity Undo button only functions inside an editor if you set 'Transpose' to a non‑zero value. This is a long‑standing bug in both Mac and PC versions of Cubase, but Steinberg UK have confirmed that it will be corrected in a forthcoming update.

One way around this bug is to use the Logical Editor. This also has a scale transform function in its Expert page, and this time the Undo button does work when inside another editor. Select your Part(s), open another editor (perhaps the Key editor, as in the previous example), and then open the Logical Editor. Make sure you are displaying the Expert (larger) version of the window — if you see a button marked Expert, you are still in Easy mode, so click on this button. The only setting you will need to change is Value 1 in the lower Processing line of options: change this, using the drop‑down options, to Scalemap, and then set the Scale and Key in the two boxes beneath. All options in the top row should be left set to 'Ignore' and the others in the bottom row to 'Keep'. Then select Transform in the Functions box, and click on the Do It button. Although you can transpose notes using the Plus or Minus options for Value 1, it's not as immediate as having the dedicated function of the Transpose/Velocity window.

Despite the current Undo restrictions, Scale Correction can perform magical changes to your songs, and I've created lots of dramatic key and mood changes that I would never have come across any other way. It's also a great technique for providing fresh inspiration!

Do you have any handy Cubase tips you'd like to share with the world? Conversely, are you scratching your head trying to puzzle out how to do something, or wondering what that obscure function at the bottom of the menu does? Each month in Cubase Notes we'll be printing your tips and answering your questions: send your emails to cubasenotes@soundonsound.com.