MIDI For The Hardware Studio

The Universal Language By Robin Vincent 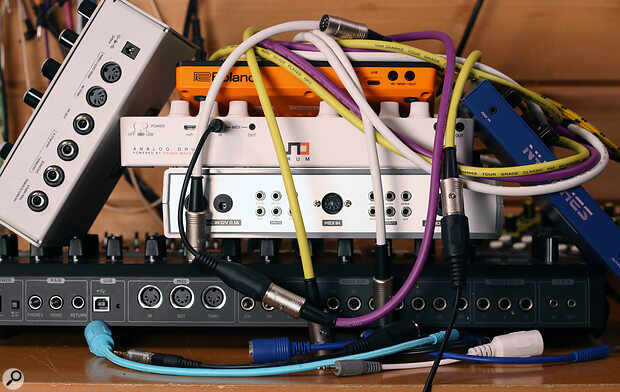 MIDI is the universal language of the studio — and if you use hardware instruments, you need to understand it!

MIDI 2.0 will undoubtedly be a revolution in seamless and transparent musical connectivity. But until those mystical protocols are negotiating on our behalf, good old‑fashioned MIDI 1.0 is still the method by which most electronic musical instruments communicate. With many people emerging from software studios and encountering hardware setups for the first time, it might be good to brush up on your MIDI skills and make sure you’ve got the basics right.

MIDI reigned supreme for many years, supplanting analogue control voltages with the wit of velocity, the charm of patch changes and the allure of transferable data. But then it seemed to disappear into the computer. As the software studio blossomed, synths and samplers were pulled in and assimilated into the computer, and USB came along to take care of any peripherals. MIDI cables and connections were lost, and those networks of control and data exchange faded from memory. It’s easy to forget that whole generations of composers and producers may never have plugged in a 5‑pin MIDI cable.

DAWs still use MIDI as a data format to represent and manipulate musical notes, but once‑important features such as channel numbers and ports are rarely relevant in software, where you tend to load a separate instance of a software synth for every track. Move to hardware, however, and the workflow is far less fluid. You might be surprised at how often things don’t work quite as you thought.

So, in this guide, we’re going to tackle the fundamentals of MIDI 1.0 from the perspective of moving from DAW to DAWless, or somewhere in between.

MIDI stands for Musical Instrument Digital Interface, and it is a digital protocol that allows you to control one MIDI device from another MIDI device. In practical terms, it means you can play one synthesizer from the keys of another. Before MIDI, you would typically have had a prog‑rock‑sized stand full of individual synthesizers that you would have had to play from their own keyboards, one or two at a time. MIDI allowed you to play multiple synths from a single keyboard, and this led manufacturers to offer synths without the now‑superfluous keyboards. A ’90s studio would thus contain a rack of synth modules, all played from one keyboard. The keyboard itself didn’t need to be anything more than a row of keys that output MIDI, and so, the MIDI controller keyboard was born. It wasn’t long before those hardware synths became software synths, and your entire synthesizer rig was reduced to a laptop and a USB‑connected MIDI keyboard. 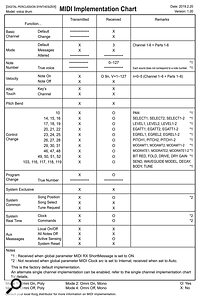 Before MIDI Learn, there were MIDI implementation charts! This table shows how the Korg Volca Drum responds to various MIDI messages. The Control Change section in the middle lists the MIDI CC numbers and the parameters they correspond to. If you wanted to control the pitch of oscillator 1 from an external MIDI controller, for example, you’d set one of its encoders to output MIDI CC 26.MIDI note data tell the receiving device what notes to play, and when they should start and stop, but that’s not all. MIDI can also transfer information about velocity, pitch bend, modulation, sustain and all sorts of parameter values as well as MIDI Clock, Start/Stop commands and tempo. Most importantly, both notes and parameter information can be recorded, edited, stored and played back by a MIDI sequencer or DAW.

There are 128 possible ‘continuous controller’ or ‘CC’ numbers that can travel between devices, and most of these can be mapped to any parameter, knob or control on the destination device. So, when you click on MIDI Learn in a software synth and map knobs from your USB MIDI controller, you are assigning MIDI CC numbers from your controller to the parameters in the synth.

As controller mapping in software is really easy, you may be surprised to find that it can be difficult and fiddly in hardware. It usually involves digging out MIDI implementation charts that are hidden away at the back of manuals and navigating tiny LCD screens and annoying menu systems to set CC numbers manually. But the principle of controlling a synth from a MIDI controller is the same. On the other hand, part of the joy of hardware synthesizers is the uniqueness of their own front panels and workflows. There’s no reason why you have to map controls from a master controller to a synth; you can just use the synth’s own knobs, assuming they are within reach. MIDI gives you lots of possibilities, but you don’t have to take up all of them.

A single stream of MIDI data can contain 16 channels. You may be aware of MIDI channel numbers in your DAW but unless you are using a multi‑channel soft synth like HALion, SampleTank or Kontakt, you’ve probably just ignored them. In hardware terms, those 16 channels mean that one controller can address 16 different devices, down a single cable from a single keyboard. This is where the joy of cabling comes in, which is often the first area where MIDI novices come unstuck. 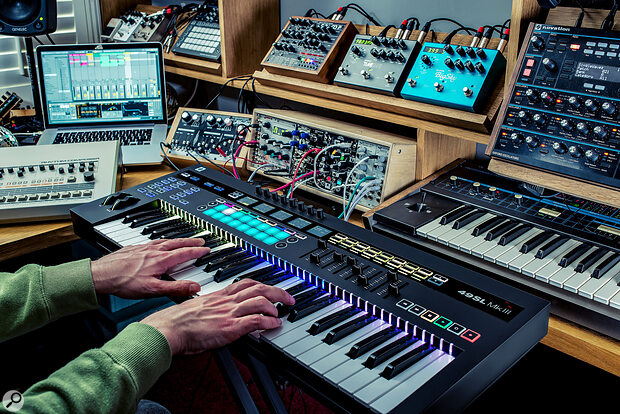 A single MIDI keyboard can control up to 16 other MIDI instruments.

In the heyday of MIDI there was an order to things: a proper way to do connections that we all understood. These days there’s nothing but chaos on the back of synthesizers, which makes talking about it difficult. But in the good old days there were three types of MIDI port: MIDI In, MIDI Out and MIDI Thru. The ports repurposed a popular audio connector at the time of invention called DIN, which I’ve just discovered stands for the Deutsches Institut für Normung. It’s a round and chunky connector with a fan of five pins, although MIDI only actually uses two of these. The ports placed on the back of MIDI devices are the sockets, and the cables carry the pins. The arrangement of the pins meant that the cable could only go in one orientation, which would be the cause of much frustration when trying to reach behind a synth to plug one in. 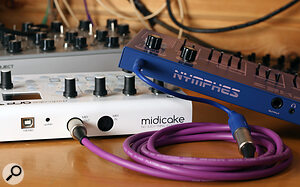 Unlike USB, traditional 5‑pin MIDI connections are unidirectional — the data only travels one way. If you connect the MIDI Out from a sequencer to the MIDI In of a synth, you’ll be able to control the synth from the sequencer. But if you want the synth to send data back, you need to connect its MIDI Out to the sequencer’s MIDI In.MIDI only travels...