Kenton's USB Solo puts your computer directly in touch with your analogue synths. 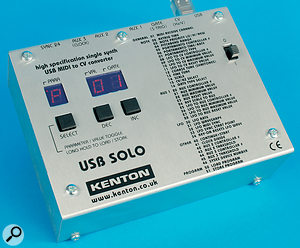 In the UK, at least, the name Kenton Electronics is likely to be the first one you think of for anything involving the marriage of old synths and digital studio technology. They have long manufactured MIDI retrofit kits for vintage analogue instruments, while their Pro Solo and Pro 2000 serve the alternate control option, converting MIDI instructions from your computer or master keyboard to CV and Gate signals that are recognised by many old monosynths. (Kenton can also add CV and Gate sockets to various synths that didn't have them by design.)

As computers have come to dominate the studio, good old DIN cables have become a bit passé, and most of the MIDI data in a modern setup is likely to be entering your computer via a USB connection. Kenton's latest product is a diminutive and feather‑light metal box that allows said data to exit your computer the same way. The USB Solo is, in other words, a MIDI-to-CV converter that plugs directly into a USB port, with no MIDI interface or DIN cable required, nor any need for a power supply. This has obvious advantages in terms of convenience and the reduction of studio spaghetti; Kenton also say that the data reaches your synth more quickly this way.

In terms of features, the USB Solo is very similar to the Pro Solo MkII, which was reviewed expansively by Gordon Reid in Sound On Sound's June 2006 issue (/sos/jun06/articles/kentonprosoloii.htm). It is, in other words, designed to provide comprehensive control over a single, monophonic analogue synth. There are two continuously variable outputs: one is dedicated to pitch control voltage, while the other is designed as an auxiliary output for control of filter cutoff or any other suitable parameter your synth makes available, and can output a user‑defined LFO signal. These are augmented by three gated (on/off only) outputs — one for note on/off duties and the other two auxiliary outputs for switching and clocking — and a DIN Sync port for instruments that need one. As ever, all the major CV and Gate/trigger standards are supported. 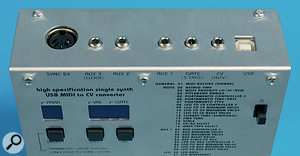 All of the USB Solo's connections are found at the back of the unit. Power is supplied by USB.

Rather than provide a comprehensive list of how the user interface works, and what the USB Solo is capable of, I'll refer readers to the Pro Solo II review and focus here on the ways in which the new unit differs from its sibling. The most obvious physical differences are that the USB Solo is silver rather than blue, and that although its functionality is almost identical to that of the Pro Solo II, it employs a somewhat different array of sockets to implement that functionality. On the Pro Solo II, the two gated auxiliary outputs emerge via the DIN connector, meaning that you can't use them at the same time as DIN Sync. Here, Auxes 2 and 3 have dedicated mini‑jack sockets of their own. There is, obviously, no MIDI connector, and the USB Solo happily takes its power from the host USB device, so no need for a 9V socket.

In keeping with the general focus on convenience, Kenton have also added 40 memory locations, each of which stores the entire setup of the unit. This is a major improvement, especially for those who might want to switch the USB Solo between multiple instruments, or between different aux setups. What's more, many of the locations come pre‑loaded with presets that, between them, cover nearly all the instruments the USB Solo is likely to be used with. For instance, for me to use the USB Solo with my Korg MS20, it needed to be configured to the S‑trig and Hz/V standards; and to do so, all I had to do was select parameter 50 ('load preset'), use the Inc and Dec buttons to select preset 37, and press and hold the Select button.

As luck would have it, when the USB Solo arrived for review I'd recently calibrated the MS20 to be at concert pitch and in tune across the entire range. When played via the USB Solo, however, it was almost a semitone flat, and the scaling was slightly out. Fortunately, both parameters can easily be adjusted, so I was able to create a preset that matched not only MS20s in general, but the foibles of my particular 30‑year‑old synth. Neat.

Beyond the fact that it works and works well, there's little more that can be said about the USB Solo, which is about as easy to use as anything with a three‑digit display could be (though I suppose some would welcome a software‑based remote editor). The extra £15 compared with the Pro Solo MkII is amply justified by the addition of memories, the extra physical outputs for Auxes 1 and 2, and the elimination of an external power supply. In fact, the only complaints about the USB Solo are likely to come from those who bought a Pro Solo II and wish they'd waited for its silver brother.  And, of course, the advantages of going USB would be even greater in a multi‑channel unit, so let's hope Kenton come up with a USB version of their Pro 2000 as well.

The USB Solo is a true plug‑and‑play device, requiring no drivers and providing no software control panel or settings. It was recognised without problems by Windows XP on my machine, and I even found I could switch it off and on without disturbing anything. To test its latency, I created a hard‑quantised MIDI part and routed it both to the USB Solo and to a soft synth running in Cubase. I then recorded the Gate output of the USB Solo to one audio track, and the audio output of the soft synth through the loopback inputs on my Focusrite Saffire Pro 40 interface (I knew they'd come in handy one day) to another. The USB Solo track lagged behind the soft‑synth track by around 250‑300 samples at 44.1kHz (there was typically perhaps 50ms variation due to jitter). This equates to a latency of 6ms or so, which is not related to the audio interface's buffer size, and is roughly on a par with that of many USB MIDI interfaces. Kenton told me that the latency of the unit itself is below 1ms, so really it's down to how smoothly your computer can spit out data over USB. My machine always has a number of peripherals hanging off the USB ports, so if you're able to maintain a cleaner system you may well see better figures. Even so, I did not experience any noticeable lag when playing my MS20 via a USB keyboard and the USB Solo.

The USB Solo is the perfect set‑and‑forget gadget for those who want to integrate an analogue synth into a computer‑based recording setup.