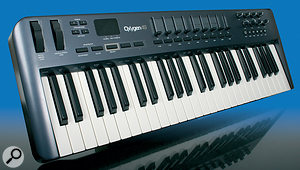 This is apparently the third generation of the M‑Audio Oxygen range, and it is part of an already well‑established category of products: it's an entry‑level controller keyboard designed to be attached directly to a computer, and to be affordable and easy to use. In pursuit of this last objective M‑Audio have attempted to provide more‑or‑less effortless integration with popular DAW applications via a system called DirectLink.

In the box, together with the keyboard itself, is a brief printed Quick Start Guide, a USB cable and a disc containing more extensive documentation in PDF format, along with device drivers for Windows systems. The Oxygen 49 is a 'class‑compliant' USB device, so it's not strictly necessary for drivers to be installed, although they may be required for Windows users wanting to use the keyboard with two different applications at the same time, or in conjunction with another class‑compliant device with audio capabilities.

The quoted minimum system requirements are a 1GHz CPU and 512MB of RAM for Windows and Mac users alike, although realistically you'd probably want a bit more than that just to run the software the Oxygen 49 is intended to be used with.

The Oxygen 49, unsurprisingly, features a 49‑key keyboard; other models in the range provide 25‑ and 61‑key configurations. The keyboard is full‑size and velocity‑sensitive, although it's neither weighted nor 'semi‑weighted', and doesn't provide aftertouch sensitivity (not that you'd really expect it to, at this price). Pitch‑bend and modulation wheels are positioned above the left‑hand end of the keyboard. A pair of buttons nearby allows the effective range to be switched up or down in octaves, while another pair can be used to switch between tracks in supported DAW software.

Towards the right‑hand end of the top panel are nine assignable sliders, which can be used to control faders in a software mixer, or any other parameters you care to assign to them. Beneath the faders are nine assignable buttons, and further still to the right are eight assignable knobs and a set of sequencer transport buttons (the usual Stop, Play, Record, Fast Forward and Rewind, plus a button to toggle looping on and off).

The remaining buttons are used to page through and select the Oxygen 49's presets, to 'mute' output from the device's knobs and sliders (to avoid abrupt jumps when switching between different presets, for example), and to send a snapshot of the current values of those same controls. A three‑digit red LED display completes the top panel, allowing basic, rather abbreviated information about the device's state to be conveyed.

The Oxygen 49's back panel is fairly sparse. There's a standard quarter‑inch socket where an optional sustain pedal can be connected, a Kensington lock connector for attaching an anti‑theft security cable, an on/off switch and a standard USB socket. The device draws its current via USB, and there's no option to connect an external power supply. Similarly, no five‑pin MIDI socket is provided for directly connecting hardware sound sources. The Oxygen 49 is fundamentally a computer peripheral, designed with software‑based virtual studio setups in mind.

A Breath Of Fresh Air?

The Oxygen 49 is intended to be simple to use, and manages it quite well. M‑Audio's DirectLink technology aims to offer automatic integration with supported software running on the host computer. Applications not supported by DirectLink may still be controlled from the device, either by using the software's own MIDI Learn function (assuming there is one) to make assignments, or by manually assigning the appropriate MIDI CCs to controls as required. This is a simple enough procedure involving two or three button‑pushes, data entry being done via the keyboard itself. Ten preset slots are available, in which sets of controller assignments can be stored (preset 10 is set aside for DirectLink), and these can be dumped via SysEx for external storage.

M‑Audio and their parent company Avid are keen to emphasise that DirectLink support is built in to recent versions of Pro Tools, users of which can expect to plug in an Oxygen controller and have it work almost immediately. Users of other DAWs have to work a little bit harder — although it really just boils down to downloading the appropriate package from the M‑Audio web site and running an installer.

Downloadable DirectLink packages are available for Apple's Garage Band, Logic Pro 8, Logic Express 8, Propellerhead's Reason and Steinberg Cubase 5. Users of Pro Tools 8.01 and later have nothing to download, and neither do Ableton Live 8.09 users, since both applications include built‑in support. For the purposes of this review, I decided to test the Oxygen 49 with Reason 4.01.

After downloading the required package I ran the installer, clicked through a couple of dialogue boxes, and the installation was complete. I connected the Oxygen 49 to my computer and started Reason. The keyboard was immediately recognised and Reason offered to set it up for me. From starting the installer to tweaking on‑screen controls took no more than a minute.

Controlling Reason (and, I can only assume, the other supported DAW applications) from the Oxygen 49 is easy enough. You can select and switch between sequencer tracks using the Track buttons. The sequencer transport controls work as you would expect, and you'll quickly find you can navigate around the application without too often having to reach for the mouse. Parameters on the instrument assigned to the active track are automatically mapped to controls on the keyboard. Switching tracks instantly remaps the controls to appropriate parameters on the next assigned instrument. It's not always immediately apparent which instrument parameters will be assigned to which Oxygen controls, but the choices are fairly rational, and a PDF included with the DirectLink package includes a useful 'cheat sheet' of control assignments for the different Reason devices.

I was initially puzzled that I didn't seem to be able to control the faders on Reason's mixer with the Oxygen's sliders. However, it turned out that all I needed to do was create a sequencer track for the mixer device (by right‑clicking it in Reason and choosing Create Track), whereupon the sliders immediately came to life. An interesting Drawbar Mode allows the calibration of the sliders to be reversed, so that zero is at the top and 127 is at the bottom; this is intended to work with organ instruments, but it might also have other applications.

The rear panel hosts just a USB port, a socket for an optional footswitch and the unit's on/off switch.

Once hardware and software are communicating with one another, you can get on and play. The Oxygen 49's keyboard is very light and springy, although it seems quite solidly constructed, without any disconcerting buzzes or rattles. A choice of seven basic 'velocity curve' settings is available to fine‑tune the keyboard's response. In addition to the default setting, there are louder and softer settings, a 'linear' setting (which seems very similar to the default), and three 'fixed' settings which effectively disable sensitivity, fixing the keyboard's output velocity at 64, 100 or 127.

The pitch‑bend and modulation wheels are made from a kind of hard plastic, and despite the knurled surface and large fingertip indentations, they can feel slightly slippery. Their positioning above the bottom few keys of the keyboard might also be a bit disconcerting if you're expecting them to be beside the left‑hand end, although that's quite easy to adapt to.

The transport controls and other buttons are made of a rubberised material, and are 'clicky' when pressed. Although I wouldn't go so far as to say they were flimsy, I had the sense that they might not take kindly to too much over‑enthusiastic stabbing.

The eight knobs have caps that are also made from a slightly rubbery material, and are appropriately grippy. Although their staggered arrangement helps a little, the knobs in the top row do feel a bit crowded by their neighbours. Given their proximity to the top edge and right‑hand end of the keyboard, they also seem slightly exposed — and indeed one of the knobs on the review unit looked as if it had taken a knock at some point, leaving its post slightly bent.

The nine sliders have a short travel (about one and a half inches) and are similarly fitted with soft, slightly rubbery caps. In use they work well enough, although they're perhaps on the short side for controlling faders in a DAW's mixer. They also feel a bit loose, with a noticeable side‑to‑side wobble. Their posts stand about a half‑inch proud of the top panel and, as with the knobs, I'd be slightly concerned that a careless knock might bend one out of shape (although to be fair, the sliders on the review unit had all managed to avoid this fate, so I'm perhaps overstating the risk).

M‑Audio describe the Oxygen 49 as "a portable keyboard that's perfect for both production and performance”. Although it's certainly compact and lightweight, and would be easy to lug round to a bandmate's house for a rehearsal, its construction doesn't quite feel rugged enough for me to recommend it as a regular gigging keyboard. As an affordable home-studio controller, however, it has a lot going for it. It's economical with space, has a useful but not overwhelming selection of controls, and DirectLink makes it just about effortless to set up and use with supported applications.

There are other, similar controllers on the market, but not many in this price bracket, so if you're on a limited budget and eager to get the most for your money, the Oxygen 49 is certainly worth considering.

Edirol's PC50 is an affordable, full‑size keyboard, although it lacks knobs and sliders, and has nothing comparable to DirectLink. Behringer's U‑Control keyboards offer broadly comparable features for around the same price. Novation's Remote SL Compact 25 offers more sophistication, but at a higher cost.

A functional USB/MIDI controller keyboard, offering plenty of features at a reasonable price. Perhaps not an ideal gigging keyboard, but a good controller for computer‑based home studios.