Q. Are all Decibels equal? Skip to main content

Q. Are all Decibels equal?

Equipment specifications often give input and output levels with units like dBu, dBV and dBFS. What's the difference?

Technical Editor Hugh Robjohns replies: The decibel (dB) is a handy mathematical way of expressing a ratio between two quantities. It's handy for audio equipment because it is a logarithmic system, and our ears behave in a logarithmic fashion, so the two seem to suit each other well, and the results become more meaningful and consistent. 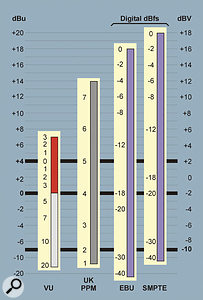 This chart compares the scale of various types of meter in relation to dBu values (left) and dBV values (right).Decibels are often used to compare two signal levels — say, the input and output level from an amplifier. If the output level (Vout) was twice as big as the input level (Vin), the amplifier would have a gain of 6dB. The calculation is:

Sometimes, rather than compare two arbitrary signals in this way, we want to compare one signal with a defined reference level. That reference level is indicated by adding a suffix to the dB term. The three common ones in use in audio equipment are those you've asked about.

The standard reference level for audio signals in professional environments was defined a long time ago as being the level achieved when 1mW of power was dissipated in a 600Ω load. The origins are tied up in telecommunications and needn't concern us, but the salient fact is that 1mW in 600Ω produces an average (rms) voltage of 0.775V.

Fortunately, the practice of terminating audio lines in 600Ω has long since been abandoned in (most) audio environments, but the reference voltage has remained in use. To differentiate between the old dBm (requiring 600Ω terminations) and the new system which doesn't require terminating, we use the descriptor: 0dBu — the 'u' meaning 'unterminated.' Thus, 0dBu means a voltage reference of 0.775V (rms), irrespective of load impedance. A lot of professional systems adopt a higher standard reference level of +4dBu, which is a voltage of 1.228V (rms).

It is often useful to know the difference between 0dBu and 0dBV, and those equipped with a scientific calculator will be able to figure it out easily enough. For everyone else, the difference is 8.8dB — and the difference between +4dBu and -10dBV is 11.8dB. So in round numbers, converting from semi-pro to pro levels requires 12dB of extra gain, and going the other way needs a 12dB pad.

The third common decibel term — dBFS — is used in digital systems. The only valid reference point in a digital system is the maximum quantising level or 'full scale' and this is what the 'FS' suffix relates to. So we have to count down from the top and signals usually have negative values.