Q. Are back-electret mics any good? Skip to main content

Q. Are back-electret mics any good?

SOS Editor In Chief Paul White replies: The short answer is no, back-electrets are not the poor relations anymore. Certainly electret mics had a bad reputation in the 1970s and '80s, but the technology was pretty crude back then. It has advanced massively since, and today some of the very best mics are electret designs — including all of the small-diaphragm models from DPA, some large-diaphragm AKG mics and many Audio-Technica models.

The difference between a traditional capacitor mic and a back-electret model is in the way the capsule is polarised. Any capacitor microphone needs to have an electrical charge applied to the capacitor, formed by a conductive 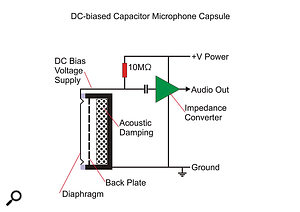 diaphragm that's placed in close proximity to a fixed backplate in order to produce any signal. As the diaphragm moves relative to the backplate, whenever it's forced into vibration by sound waves, the electrical value of the capacitor changes. As the diaphragm gets closer to the backplate, the capacitance value increases, and as it moves further away it decreases. A simple formula, Q = CV (where Q is charge, C is capacitance and V is voltage between the two plates), states the relationship between the three key electrical parameters. From this it can be seen that if Q is kept essentially constant (through the use of a charging circuit with a very long time constant), then as C is modulated by air movement, so must V be modulated. This variation in the voltage between the diaphragm and backplate is amplified to produce the audio signal, but to avoid draining away the vital electrical charge from the capsule, a very high-impedance preamp is required, usually involving either a FET (Field Effect Transistor) or a valve.

In a true capacitor mic, the electrical charge is invariably derived either from phantom power or from a separate power supply, as is the case with the vast majority of valve microphones. However, the electret microphone uses a different method of keeping the capsule charged. An electret material is one that carries a permanent electrical charge sealed within an insulating film, and its manufacture involves high temperatures and very high voltages. Early electret mics used this material to form the diaphragm but, as it is both thicker and heavier than a 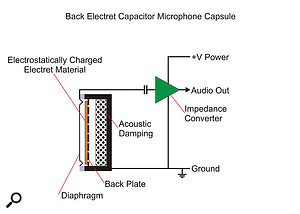 typical gold-coated Mylar diaphragm, high-frequency performance and sensitivity were compromised. These simple electret mics are used extensively in all manner of consumer devices, including mobile telephones.

The quality breakthrough came when the electret material was fixed to the backplate (hence the term back-electret), allowing it to be used in conjunction with a conventional gold-on-Mylar diaphragm, providing designers with the means to achieve the same performance as from a conventional capacitor mic but without the need for an external polarising voltage to maintain the charge. This allows some live back-electret mics to be powered from batteries when phantom power isn't available, as only the preamplifier needs power and this can often be run at a much lower voltage than a typical capsule's polarising voltage.

A good back-electret mic can perform every bit as well as a traditional capacitor design, and in some cases a little better, though the electrical charge sealed in the electret material can leak away very slowly over a period of several decades, resulting in a slight decrease in sensitivity. In reality, though, this leakage is generally so small as not to be a practical issue.