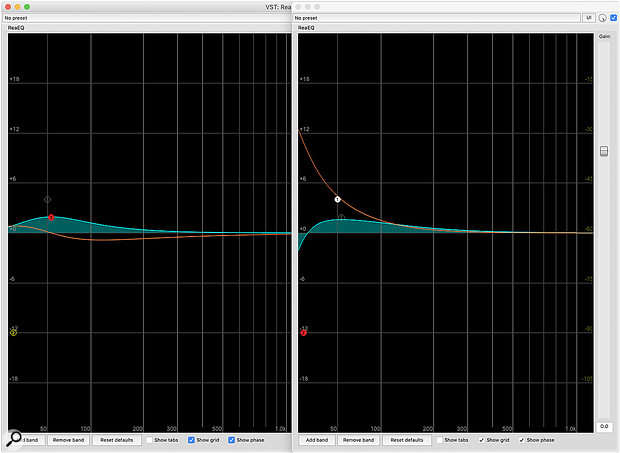 For about the same amount of broad LF boost with a minimum-phase EQ, a bell filter (left screen) results in less phase shift (red curve) than a shelf coupled with a high-pass filter (right screen).

I've seen some people suggest using EQs with a wide, really high-frequency bell boost — like 40 or 50 kHz, to boost 'air' frequencies. I've seen the same suggested for low frequencies too — wide, gentle boosts around 30 or 50 Hz or so to lift the bottom end. What's the difference between using bell boosts like this and using a good old-fashioned high-shelving EQ? Are the 'curves' different or is there more to it than that?

SOS Technical Editor Hugh Robjohns replies: Shelf EQs normally have 6dB/Oct slopes, whereas bells can be steeper, especially close to the centre frequency for non-constant-Q designs (although most bell sections are still just 6dB per octave). But I think a more practical reason people recommend bell EQs is probably that shelf EQs often only have one or two turnover frequency options, whereas bells can sometimes be moved higher/lower.

There's also the idea that a shelf boost amplifies everything above/below the corner frequency, whereas a bell returns the infra/ultra-sonic level to unity. But in practice the EQ's bandwidth will be defined by the rest of the circuitry beyond the EQ, so the out-of-band infra/ultra sonics will be taken care of anyway.

SOS Reviews Editor Matt Houghton adds: I sometimes use bells where I might once have reached for shelves, though I'd stress that the only right and wrong of it lies in what you hear! On the low end I started using bells instead of shelves largely out of practicality/laziness — when using shelving boosts I often want to couple these with a high-pass filter, whereas when using a bell boost I often find I don't need one (assuming there's not any particularly nasty LF detritus down there). Sometimes, the bell boost seems, subjectively, to sound better too. I'd not hitherto stopped to wonder why that might be and it's entirely possible that it's in my imagination, but it's perhaps worth noting that for the same degree of boost in the wanted signal, a single, broad-bandwidth bell boost results in less phase shift than a shelf plus a high-pass filter. That could, I suppose, cause an audible change in some circumstances.