Q. Are there any MP3 players we can use as portable recorders?

My band members and I wish to find an easy and affordable way to record and disseminate arrangement ideas. Currently, we record stereo into Pro Tools, bounce to hard disk, import into iTunes and then burn separate copies for each band member (there are four of us). This process takes up valuable time, especially if the CDs need to be posted to different locations around the country. We used to use Minidisc players, but these proved to be unreliable, and only two of us have working Minidisc players now. It would be great if we could record ideas straight to MP3 and then email them to each other. I've seen various MP3 players that offer 'voice recording', but I assume that these won't provide particularly useful results, as they're designed for dictation. Can you suggest anything?

Reviews Editor Matt Houghton replies: There are two key issues you have raised here: first, finding an easy way to record MP3 files, and second, coming up with an efficient way to disseminate said MP3s to the band members. Let me deal with the latter point first, as this appears to be what is taking up most of your time. 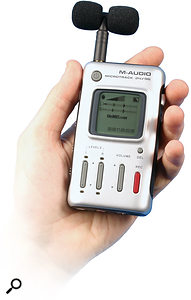 M-Audio's Microtrack is one of a number of portable devices that record to MP3 and PCM audio formats.

For me, probably the best solution is to have one recording of the arrangement and put it on to the Internet, from where you can all download to your MP3 players or computers as required. You could do this on one of various Myspace-style sites, or alternatively use an FTP area on a cheap host, where you can add password protection if you feel it's necessary. This requires you to have a broadband connection, but for me this is a worthwhile investment.

On the other matter of a replacement for your Minidiscs, there are a few options. It is a source of great frustration to musicians that most MP3 players, despite their vast storage capacity, do not have in-built recording functions. I suspect that this is because the demand for this comes from such a small proportion of the market.

The natural successor to the Minidisc is the solid-state recorder, and there are various ones on the market, including models from Edirol (the R09, reviewed in SOS October 2006, and on-line at www.soundonsound.com/sos/oct06/articles/edirolr09.htm), Zoom, with their H4 (see page 150 of this issue), and M-Audio's Microtrack (SOS March 2006, www.soundonsound.com/sos/mar06/articles/maudiomicrotrack.htm, pictured right). As they are solid-state, they're less prone to the mechanical failure that Minidiscs suffer from. Some have XLR microphone inputs in addition to the built-in mic, and most will record at 16-bit/44.1kHz or higher, as well as directly to MP3 in a variety of bit rates (up to 320kbps), making them ideal tools for other music-related tasks. 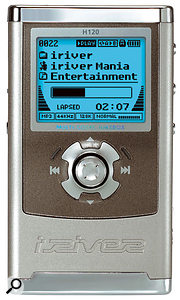 The discontinued iRiver H120 portable MP3 player had a mic input and recorded in PCM and MP3 formats. If you require more functionality to help in the arrangement and composition process, another approach is to use a handheld multitrack recorder, such as those available from Zoom or Korg. These devices allow you to record multiple tracks, invariably include a selection of effects, and provide drum and bass auto-accompaniment. This means you can keep to a pre-set tempo, which can be handy if you want to transfer the demo to your computer and construct your song around it. Some, including most modern ones, allow you to connect to a computer to transfer the files, and they do so much faster than Minidiscs (the speed of data transfer was one of the key limitations of Minidisc technology). The biggest issue is recording quality and data storage capacity, which varies from model to model, but normally goes no higher than 2GB.

As for recording direct to MP3 players, there are some options but most are not entirely satisfactory. One exception that I know of is some now-discontinued models of the iRiver MP3 player, including the H120 (pictured left) and 140. These used hard disks (the size of which was denoted by the last two digits of the model number), had a fairly decent mic input, and recorded WAVs or MP3s. These can be bought second-hand, although due to their popularity among sound engineers, they aren't as cheap as you might expect. Later models of iRiver will record to MP3, but only using a built-in mic. PCM-recording capability can be added to later models by installing Rockbox firmware (www.rockbox.org), but it's not a manuacturer-approved modification, and it may invalidate your warranty, so tread carefully.

If you are recording only line-level signals, you can get a device called the Gemini iKey, which will record audio onto any USB-equipped device including MP3 players and external hard drives. I haven't heard the results, but this seems to be a promising development. However, I am not aware of such a device that allows you to plug in a microphone without an external preamp, so there's definitely a market opportunity for a manufacturer there!

Specifically for use with an iPod, you might be tempted to try one of the Griffin voice recorders, but these record at low quality and need to be close to the sound source, so are not really suitable for recording musicians.

Finally, something that I've read about, but never tried or had direct experience with, is running Linux on a third-generation or earlier iPod. This will enable you to record at up to 24-bit/96kHz audio in mono, but is only recommended if you are feeling very confident (and even then, not strongly recommended at all!). A web search will give you more detail on this but be warned — it is not an approach for the faint-hearted!