Q. Can I get my mixer to communicate with Logic?

I'm in charge of setting up my church's recording room. We have an Apple G4 dual-1.25GHz computer and a Behringer MX 2004a mixer. I have been playing around with all sorts of software, including Logic Pro, but I can't get it to work correctly. Is there another way to connect the mixer without using the onboard audio input? Is their something I can buy and connect up so that Logic can identify the mixer?

SOS contributor Stephen Bennett replies:  As your Behringer mixer has 20 inputs (eight of them with mic preamps), I assume that you are mixing several musicians down to a stereo output, which feeds the stereo mini-jack line input on your G4. This shouldn't pose too much of a problem as you've only got two inputs to deal with, but you need to make sure a few things are correctly set up before you begin. To do this in Logic, select an audio track in the Arrange page, make sure it's a stereo track by clicking on the little icon to the left of the 'rec' button on the channel strip, and click and hold the mouse on the Input select box, which is just under the I/O text. You should see a pull-down menu appear where you can select Input 1-2. Clicking on 'rec' allows you to monitor any audio coming via the mixer into Logic — but you must make sure the software monitoring is set to 'on' and that the driver is set to 'built-in input'. You do this from the Audio Hardware and Drivers window, which you'll find in the main audio menu. 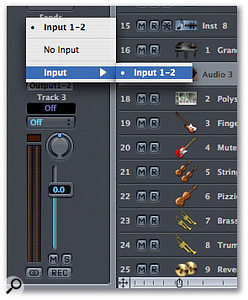 Renaming your generic inputs to correspond with your hardware (see above) can make life easier when routing audio to channels. If you run the Audio MIDI Setup program from the Utilities folder on your Mac (inside the Applications folder), you can make sure that Inputs 1&2 are set to 'line input'. This application is the Control Panel for all Core Audio drivers under OS X, so it's pretty useful whatever DAW you are using. One other tip when using Logic is to name all your inputs and outputs to something more useful than 'Input 1' and 'Input 2'. This can be especially useful if you intend to buy a multi-input audio interface at a later stage. To do this, open the Audio Configuration window from the main Audio menu and select I/O Labels from its View menu. Here you'll see displayed all the inputs and outputs available on your system. If you double-click on the long and short I/O Label boxes, you can enter some useful descriptive text such as 'Behringer MX 2004a'. Now, when you select inputs from the input select box, it'll display their actual names. The short version is necessary, as you'll usually see the first four characters displayed here.

Of course, you may find that the sound quality from the Mac's built-in audio isn't good enough anyway, so if you still decide that you'd rather use something that directly interfaces with your DAW, you could try something like the Behringer Xenyx (£289, reviewed in SOS June 2006). This plugs directly into the computer's USB port and, after the drivers have been installed, can be selected as the main audio driver from the Audio Hardware and Drivers menu in Logic. Once this is done, the main outputs of the mixer can be chosen directly from the track's input select box. Obviously, with this kind of mixer you are still restricted to recording all the musicians live directly to a stereo mix, as you're effectively just replacing two audio cables with a single USB lead. For a more flexible approach you could use something like the Mackie Onyx 1620 (£769, reviewed in SOS October 2004: ) or Alesis's Multimix, which allows you to record up to 16 tracks simultaneously. You can then mix down in your DAW later. To set this up, create an Arrange page with 16 separate audio tracks, and assign each of the 16 inputs available to its own track.

You may also want to consider doing away with a mixing desk altogether and using a multi-channel audio interface instead, such as the Mackie Onyx 400F (£704). Using this type of interface lets you record several separate tracks with no EQ or other effects, and add any processing at the mixing stage. It's by far the most flexible approach to recording and has the added advantage of portability. Just make sure that whatever interface you use has enough microphone preamps. Of course, you may lose the flexibility of your mixer's monitoring section if you go down this route, but if you're recording live this may not matter. If you find you miss the monitoring section, you could always add a separate monitor controller such as the Mackie Big Knob, and if you miss the feel of physical faders and knobs, a Mackie Control Universal would do the trick. These suggestions aren't the only possibilities, of course. You can buy interfaces with fewer inputs for less money. I'd suggest you use the search facility on the Sound On Sound web site, as there's an extensive archive of reviews of audio interfaces and mixers.