Q. Are there any panning rules for maintaining mono compatibility? Skip to main content

Q. Are there any panning rules for maintaining mono compatibility?

With regard to stereo image width, is there typically a 'cap' you would place on tracks to maintain a good mono sound? Perhaps there's some kind of relatively hard‑and‑fast ground rule (assuming a typical sort of track layout), such as 'never go beyond 50 percent either way'?

SOS contributor Mike Senior replies: There are two basic issues regarding mono compatibility. The first is that panning any mono track off‑centre reduces its level in the mono balance by a maximum of around 3dB when panning hard left or right. From this perspective, the only ground rule I'd apply there is to make sure that the balance continues to function correctly in mono. If your main guitar power‑riff is panned hard left, it may struggle to fulfill its musical function in mono, simply by virtue of losing a lot of ground against things like the bass, kick, snare and lead vocal (which all typically reside close to the centre).

The second issue to be aware of is that any stereo recording or stereo effect return in your mix may contain elements in one channel that are out of phase or polarity-inverted compared to the other channel. These can phase‑cancel when summed to mono, and although this might simply result in a subjective level drop (as in the case of some M/S‑based widening effects), typically the cancellation is frequency‑selective in some way, so the tone of affected parts suffers as well. Stereo drum-overhead mics and stereo piano recordings commonly fall foul of this to some extent, on account of the widespread use of spaced‑pair recording techniques on these instruments, but almost any multi‑miked part can potentially come a cropper if you pan the individual mics independently in the stereo field. 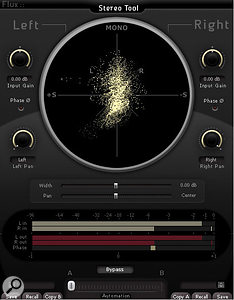 Flux Audio's Stereo Tool is the pick of the freeware stereo vectorscope displays currently available, and can help you head off mono-compatibility problems, especially if you're working on headphones.

The cast‑iron remedy to uncertainty here is to make a point of comparing your mix against commercial productions in mono. Conventions on stereo imaging vary a lot between styles, and even between engineers, so it's tricky to generalise with any validity. However, what may help you is to get hold of a stereo vectorscope display for your DAW, such as Flux Audio's fantastic freeware Stereo Tool plug‑in. Once you get used to how things look on there, it can tip you off to impending mono phase‑cancellation problems, especially if you're working on headphones, which don't give the same funny 'outside the speakers' stereo effect that's usually a clear warning sign on nearfields.

All that said, there is one little panning‑width rule of thumb that I do tend to follow personally, but this isn't as much related to mono compatibility as it is headphone listening. When you pan something hard to either side in headphones, it gives the impression that it's right by that ear, because there's no crosstalk between that earcup and the opposite ear. I've always found this a bit distracting myself, and it can make it tricky to blend the sounds in your mix convincingly, in my experience. For this reason I rarely pan mono sources beyond about 85 percent either way, because this makes them a little less dislocated in headphones and actually affects the stereo presentation very little, especially if you're feeding a selection of stereo effect returns into your mix anyway, which will still guarantee that the stereo picture is painted right out to the edges. Bear in mind, though, that this is very much an issue of personal preference, and there are lots of very famous engineers who actively prefer the extreme‑panned presentation. The only way to make up your own mind is, again, to compare your mix to your favourite records on headphones and decide which sounds best to you.