Q. Can I add facilities to my Mixing Desk?

Since experimenting with drum-kit miking (thanks for the useful articles in SOS), I have been aware of the limitations of my Seck 1882 desk. It has no high-pass or phase-reverse switches. Can anyone in your team suggest a circuit diagram for a DIY box that would serve, say, four channels? The design would have to maintain the phantom power, which is selectable on this otherwise superb mixer. 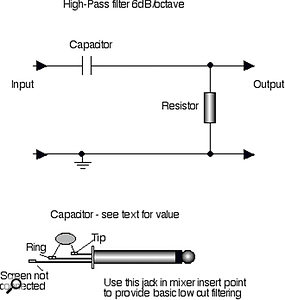 At the top is a high-pass filter circuit using a capacitor and resistor. Below is a high-pass filter lead you can wire up with a capacitor alone, using the input impedance of the insert return as the resistor. SOS Editor In Chief Paul White replies: Phase reversal is easy and you don't need any special boxes for it. All you need to do is wire up some XLR mic leads with the hot and cold cores swapped over at one end — but do ensure that you label the cables or use different-coloured leads to avoid confusing them with your regular cables.

The filter is less simple, as the only passive circuits include a capacitor in series with the signal output, and that would obstruct the phantom power and prevent the mics working. However, you could, in theory, put a passive RC (Resistor Capacitor) filter in-line via the console insert points. As the input impedance of a typical line input or insert return is usually somewhere near 50kΩ, you could forget the resistor (in effect using the input impedance of the insert return as the resistor). Just link the insert sends and returns using a suitable capacitor (experiment with values of around 0.025 to 0.05 microfarads), to get a cutoff of around 80Hz with an input impedance of 30 to 50 kΩ. However, even if this works OK, you'll only get a 6dB/octave slope and most low-cut filters have a 12dB/octave or 18dB/octave slope. Because of the more gentle slope, you may choose to make the cutoff frequency higher, which you can do by reducing the capacitor value. Halving the capacitor value doubles the cutoff frequency (puts it up by an octave) while doubling it lowers the cutoff frequency by an octave.

Pretty much any capacitor (ceramic, polyester or mylar film) will do the job, as long as it has a working voltage of more than, say, 20 Volts, which small-value capacitors tend to have anyway. A capacitor this small won't be an electrolytic type, so you don't have to worry about which way round it goes, and if you can get one that is physically small enough, you can just solder it between the tip and ring connections inside a TRS jack (see the diagram on the right) and then plug the jack into your insert point when the filter is needed.

You don't seem to want to replace your desk with one that has the facilities you're after, but that is, of course, one possible course of action, and may be considerably more straightforward. Even mid-range and very affordable new analogue desks often have high-pass filters on every input (though you would probably still have to use the leads I mentioned at the start for phase reversal), and if you go second-hand, analogue desks with both the facilities you're after are surprisingly cheap these days.