Q. Can I 're-amp' a line-level signal? Skip to main content 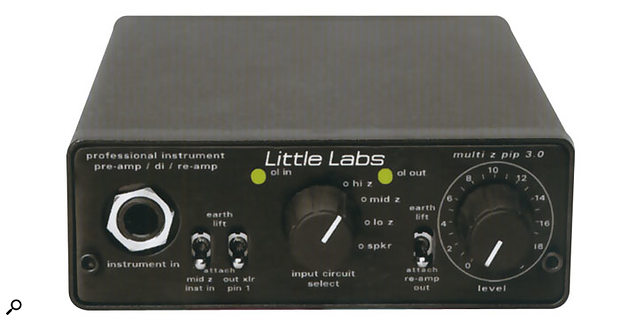 The Little Labs Multi Z PIP adjusts level and impedance and is a handy tool for re-amping.

If I record the DI'd signal from a guitar so I can put it through a guitar amp later, what are the concerns, if any? Will the line-level signal coming out of my mixer be too high or otherwise inappropriate for the amp.

Editor In Chief Paul White replies: This is a common technique and shouldn't present you with too many problems, provided that you watch your levels. The standard line out from the desk is likely to be rather high for a guitar amp input, so either use an attenuator to lower the signal level or keep the aux send master level control low and be very careful when you turn it up.

The other issue that you need to be aware of is impedance. Guitar amps are designed to accept a high-impedance input, and plugging in a low-impedance, line-level signal will result in an increase in amp hiss. This will be more of problem if you like to turn your amp up loud. There are a number of possible solutions.

The first is to buy a ready-made device to correct the signal's impedance, such as the Reamp (www.reamp.com), a small box which provides a balanced, line-level (+4dB) input, a high-impedance output and a level-trim knob. Similar devices are also available from the likes of Little Labs (www.littlelabs.com) and Millennia Media (www.mil-media.com). This kind of device is also handy if you want to use guitar effects pedals on line-level signals (as a send effect from your mixer, for example), though some pedals are more picky about impedance than others.

Another possibility is to run the signal from the mixer through a guitar pedal or preamp that has a buffered bypass. Passing the signal through the bypassed pedal will correct the signal's impedance. Obviously, a pedal with a hard-wired or 'true' bypass circuit won't be any use for this task.

I have one final suggestion, which is that you could consider buying an amp modeller device with a line input, such as the Line 6 Pod XP Pro or Behringer V Amp, or even perhaps an amp-modelling plug-in. You may initially think that this solution would be unsatisfactory, but the latest generation of amp-modelling preamps and plug-ins, if carefully set up, can get pretty close to the sound of a real cab miked up. They're also very convenient if you're working in a small space with poor acoustics or unsympathetic neighbours!