Q. Can I remove the vocals from a track using phase? Skip to main content

Q. Can I remove the vocals from a track using phase?

I understand that it's possible to remove the vocals from a track by reversing the phase of one of the stereo channels. Is this correct and, if so, how does it work? Also, is the reverse possible — can you remove the rest of the track to just leave the vocals?

Technical Editor Hugh Robjohns replies: Removing the vocals using the phase reverse trick is very easy. All you have to do is invert the polarity of one side of the stereo signal — usually the right — and then mix the left and right channels together in mono. This is pretty straightforward to do either with an analogue or digital mixer, or in a DAW, and is often referred to as the 'karaoke effect'. 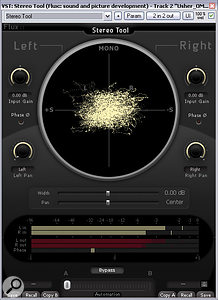 This trick works because vocals are usually recorded in the centre of the stereo image — in other words, the same signal is present at the same level in both channels — whereas the rest of the band is spread out across the entire image (with each element at different levels in the two channels). By inverting the polarity of one channel and adding the left and (inverted) right signals together, anything which is identical in both channels will cancel out, and hence the vocals disappear.

The bass and kick drum are usually panned centrally too, and so these will disappear as well, which isn't very helpful! However, if you apply a high-pass filter to one channel (in other words, roll the bass off below about 120Hz) before you do the mono summing, you can retain most of the bass parts while still removing the vocals very effectively. This works because if the bass is removed from one channel, there is nothing to cancel out the bass remaining in the other channel.

One common problem with this simple karaoke trick is that it can't remove the (usually stereo) vocal reverb, or any panned vocals (such as a chorus), so in most cases you'll only be removing most of the vocal, rather than all of it.

Unfortunately, removing everything else to just leave the solo vocal cannot be achieved with any kind of variation of this technique, simply because of the variation in the stereo panning of every other source. In order for all of the (unwanted) backing to cancel out when the polarity of one channel is reversed, it would need to be identical in both channels, with the vocal panned to one side.