Q. Can I use USB pens for sample libraries? Skip to main content

Q. Can I use USB pens for sample libraries? 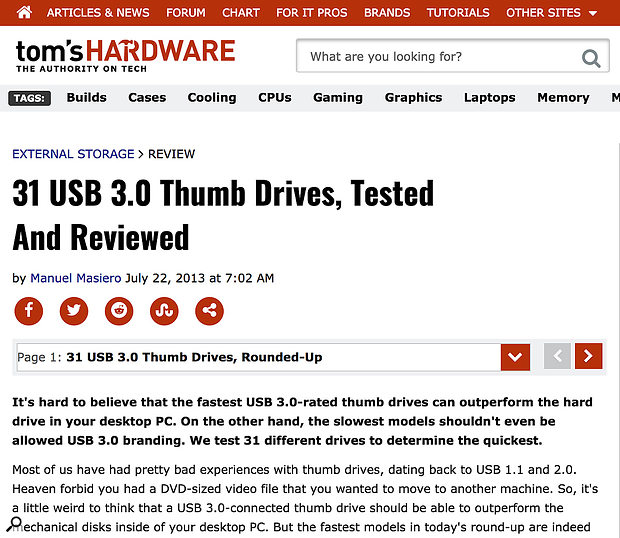 Some USB 3.0 pens are capable of much better performance than USB 2.0 ones, and can be used for sample instruments, but some models are better than others — check trusted sites such as Tom’s Hardware for detailed comparisons.

I’m in need of some disk space for sample libraries, and as I’m keen to keep the noise down I was looking at SSDs instead of another big hard disk drive. But SSDs seem really expensive! I realised that USB pen drives are getting bigger too — and I can get a 128GB pen drive for much less than a 128GB SSD. They’re smaller, too, which is nice. So I figured I could get one or two of those and put my most frequently used instruments on them. So my questions are... is the performance going to be good enough, and are there any obvious drawbacks to using a pen drive over a HDD or SSD?

SOS contributor Martin Walker replies: USB pens (or USB Flash drives, thumb drives, or memory sticks — call them what you will) are not really that different from solid-state drives (SSDs), since they both store your data in solid-state flash RAM. Both have the advantage over mechanical hard drives of being more robust, so your data is likely to survive being accidentally dropped onto the floor, and because they have no moving parts they are also completely silent, which is a real boon to the noise-conscious musician.

However, they do have several fundamental differences. Internal SSDs have speedy SATA connectors, while External SSDs are also a popular choice for data backup, the only difference being that the latter have a USB 3.0 connector (though some legacy ones will have USB 2.0) so you can plug them into a fast USB 3.0 port on your computer for excellent performance. SSDs feature advanced memory controllers for read and write caching, error correction, bad block mapping and so on, and use a type of flash RAM that both increases access speed and longevity. In other words, the SSD is designed from the ground up to provide fast data reads and writes, and long-term writing reliability, making it a perfect candidate for mechanical hard-drive replacement.

On the other hand, a USB pen is primarily designed for convenience and low cost rather than speed, using cheaper flash memory that can hold several possible states per cell. This reduces the required number of transistors and hence manufacturing cost, at the expense of access speed and possible long-term write errors. USB pens also rely on a much simpler (and once again cheaper) memory controller with fewer features and lower performance.

The most common USB pens also have USB 2.0 connectors, inhibiting their overall speed, thus making them less suitable for sample streaming. File transfer rates vary considerably among such devices, since although the theoretical maximum for USB 2.0 is a hefty 60MB/s, even a fast USB 2.0 pen might only offer up to 30MB/s read speed (the most important factor for sample streaming, since you are likely to store sample data once only but then read it a lot) and around half that rate for writes. Nevertheless, if you’re on a tight budget 30MB/s should be perfectly adequate for plenty of simultaneous streamed sampled voices (it’s roughly equivalent to a 5400rpm laptop hard drive from a few years ago), while the reduced long-term write performance of a USB pen is largely irrelevant for this write-once, read-many operation.

This was essentially the situation back in SOS March 2009 when I was last asked this question, but since then a much better option for sample streaming has appeared — the USB 3.0 pen, although this aspect does push up the price a bit. The USB 3.0 interface specifies transfer rates up to 625MB/s, although as with USB 2.0, reads tend to be much faster than writes in practice. Some USB 3.0 flash drives do exhibit reduced performance when you combine reads and writes, although as previously mentioned sample streaming only requires reads, so this aspect can be ignored. However, there’s an important caveat: while USB 3.0 pens remain compatible with USB 2.0 ports, you will only achieve USB 3.0 performance when a USB 3.0 drive is plugged into a USB 3.0 port. So, make sure you have suitable ports, or the possibility of fitting a USB 3.0 expansion card to your computer.

To be honest, top-notch USB 3.0 flash drives can cost as much as SSDs of similar capacity, and choosing suitable models can still be a bit of a lottery, as read speeds may still vary by as much as a factor of three from the slowest to the fastest. Do also beware of cheap USB 3.0 flash drives, as there may still be counterfeit models floating around that have much smaller capacity and performance than advertised. If you’re determined on this course then it’s well worth consulting well-respected web sites like Tom’s Hardware (www.tomshardware.com) to find the latest real-world results — devices from manufacturers such as OCZ, LaCie, and Kingston tend to top the performance charts.

In conclusion, a cheap but high-quality USB 2.0 pen could well do the job for you, while a more expensive USB 3.0 pen would stream far more simultaneous sampled voices. But faced with the latter’s prices, I’d personally stick with a similarly-priced budget SSD alternative for even better streaming performance.