Q. What’s In A Name? Skip to main content 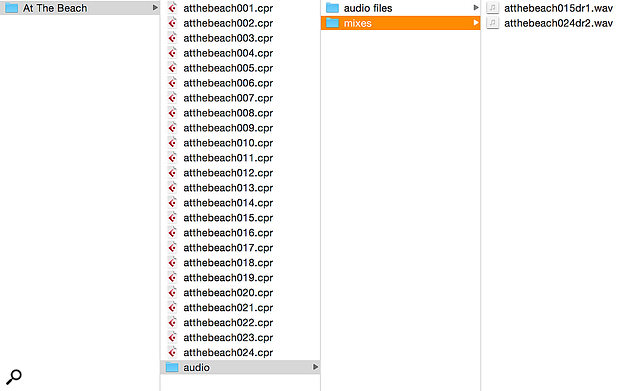 Incremental numbering of project files helps avoid confusion, and allows the project to be referenced when bouncing draft mixes.

How do you suggest I name my bounce-downs during the mixing process? I’m tripping over lots of different versions at the moment, and it’s getting confusing!

SOS contributor Mike Senior replies: Well, different engineers have their own systems, but I can tell you what works for me. The system hinges on saving my mixing project with incremental filename suffixes. So, for example, let’s say I’m working on a mix for a song called ‘At The Beach’. I’ll call my first mix project “AtTheBeach001”, and save it with that name. Then, as I work, every quarter of an hour or so I’ll do a ‘Save As...’ and increment the numeric suffix: “AtTheBeach002”, “AtTheBeach003”, and so on. Now if at any point I want to bounce out a mix, I use the same filename for that WAV file, together with a suffix indicating which notional ‘draft’ of the mix it is. In other words, let’s say my latest project is called “AtTheBeach036”, and I decide to create a first version of the mix for client fedback, then my bouncedown will be called “AtTheBeach036D1.WAV”. If there are revisions requested, so that the project file progresses to “AtTheBeach043”, the second-draft mix would be called “AtTheBeach043D2.WAV’, and so on, for as many revisions as are required. The advantage of this scheme is that I always know which mix version corresponds to which mix project, and if (as happens from time to time) the client changes their mind and prefers an earlier draft of the mix in some respect, I can easily roll back any relevant settings to match that earlier project file.

If I end up further processing the raw bouncedown for any reason, then I’ll also use suffixes to distinguish those new versions as well. So I might differentiate the raw bouncedown (“AtTheBeach043D2Raw.WAV”) from any loudness-processed version (“AtTheBeach043D2L.WAV”). Likewise, if there’s been any Harbal or iZotope RX processing, I might use ‘Har’ or ‘RX’, and I’d also save my settings for those applications with a similar name. Again, the point is just to keep track of which files have had which processing, and to keep track of those processor settings in case I need to refer to them.

My scheme’s all pretty low-tech, though, so if you need something more in-depth and standardised, check out the Audio Engineering Society’s Recommendation For Delivery Of Recorded Music Projects technical document (www.aes.org/technical/documents/AESTD1002.2.15-02_1.pdf), which has a detailed section on project, mix, stem, and track filenaming.