Q. When replacing a broken speaker should it be ‘matched’ to my existing one? 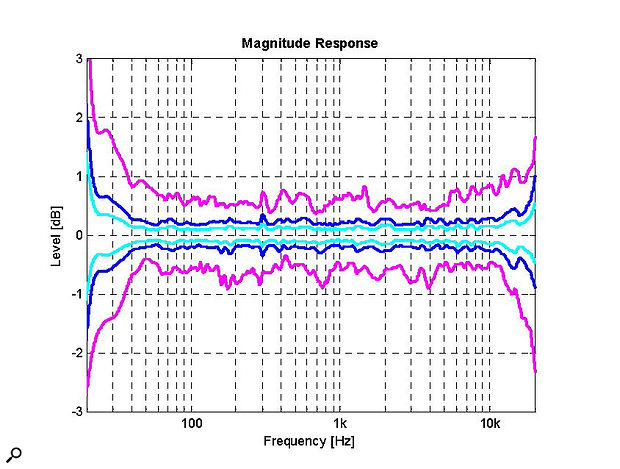 This graph shows the statistical deviation of the frequency response from the averaged responses of over 2500 measured loudspeakers, and it gives a good idea of how closely the performance of individual monitors can be matched across an entire production process, given the will and appropriate techniques. [Courtesy of AES.]

I have a set of three-year old PreSonus Eris monitors, one of which has just died. I sent it back to PreSonus to be repaired but apparently it’s going to cost more to fix than to replace. So my question is, would it make sense to use my working three year old speaker along with a brand new one, or could that cause all kinds of sonic issues?

SOS Technical Editor Hugh Robjohns replies: The accuracy of frequency response and sensitivity matching between speakers varies quite a lot between different models and manufacturers. It’s obviously a lot easier for a company to produce individual sets of matched pairs than to guarantee that any speaker built last month or last year will match any speaker built next month or next year. And while some manufacturers certainly can and do achieve that level of long-term reference precision, it’s usually only viable for the higher-end (relatively expensive) pro models.

I’m afraid I don’t know what kind of tolerances PreSonus work to, so your best bet would be to ask them whether a new speaker bought at random will be sufficiently matched to your one. I doubt it, personally, but I may be doing the company a disservice! You could always mail-order a speaker and try it, and if the stereo image isn’t stable send it back!

This adherence to a manufacturing reference with tight tolerances is something that all major broadcasters require because if a monitor fails the engineers will simply get a replacement from stores, and the operators will expect it to work flawlessly with the remaining unit. So the manufacturers that supply broadcasters are all able to maintain very tight production tolerances over many years or even decades, although it’s not an easy thing to achieve. Different batches of drive units will inevitably vary in their sensitivity and frequency responses slightly, so the speaker manufacturer has to measure and log the performance of every single drive unit and then tweak the amplifier characteristics (or crossovers) during final speaker testing to ensure conformity with the factory’s reference unit.

If a drive unit subsequently fails in the field the manufacturer can then refer to its records and supply a replacement with the same tolerance variation as the original, or the speaker’s electronics can be re-tweaked to regain accurate conformance with the replacement driver in place — the approach varies with manufacturer and speaker design.

As an example, Neumann (and Klein+Hummel before them) supply a lot of broadcasters and know a thing or two about the importance of production consistency (for microphones as well as speakers). Take a look at the graph above (borrowed from an AES paper), which shows the statistical deviation of the frequency response from the averaged responses of over 2500 measured loudspeakers, and it gives a good idea of how closely the performance of individual monitors can be matched across an entire production process, given the will and appropriate techniques.

Ideally, of course, all the traces in this graph should be on the horizontal centre-line, but every manufacturing process has tolerance, so some deviation is expected. The goal is to keep the lines as close to the centre-line as possible, and inconsistencies and poor matching are revealed as a wider vertical spread in the traces. In this graph, measuring between 40Hz and 12kHz (which is the most critical region for accurate imaging), 50 percent of the data lies with ±0.2dB of the median (cyan lines), and 80 percent lies between ±0.35dB (blue). Impressively, all 2500 of these monitor speakers remain within ±0.9dB (magenta) of the average reference response.

So in this example, Neumann can guarantee that any two speakers selected at random will definitely be matched within ±0.9dB, but actually 80 percent will match within ±0.35dB, and at least half of them will be better than ±0.2dB. This is a very impressive achievement, as most broadcasters specify ±0.5dB as the acceptable limits.

However, achieving this level of consistency isn’t cheap and typically requires modelling techniques during the design stages, good quality (and thus more expensive) drivers, narrower tolerance components, active (analogue or, increasingly, DSP) configurations which can be aligned precisely during production testing, and well-defined and controlled production processes. Needless to say, not all manufacturers can manage those things, and/or it’s not practical to achieve these ideals when the overriding influence is building units down to a budget price.

So, you could take a punt on buying a replacement speaker, but there’s no guarantee of a close match. Of course, it should be possible to compensate for any variance in sensitivity by calibrating the monitor sensitivity or volume control. And if you happen to own and use a room-correction system such as IK Multimedia ARC or Sonarworks Reference 4, then these should detect and correct any obvious differences in frequency response — though personally I’d prefer a pair of speakers I know to be a good match, irrespective of what’s connected to them!