Q. Why use so much level automation? Skip to main content

Q. Why use so much level automation? 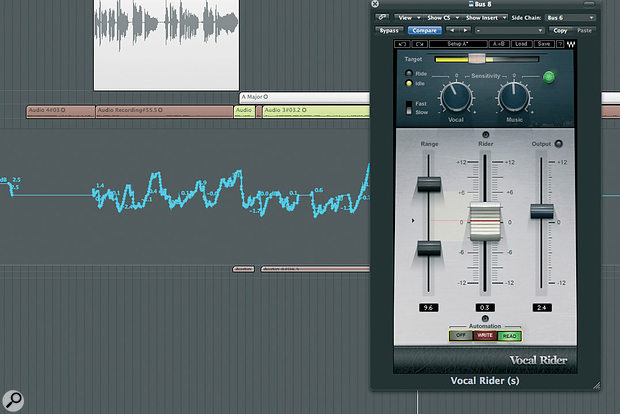 While plug-ins such as Waves’ Vocal Rider can ease the burden of vocal level automation — and can achieve more than a traditional compressor in this respect — they can’t understand lyrics or feel what needs doing and when!

Why is it that I hear about so many producers spending hours riding lead vocal levels. Surely that’s what a compressor’s supposed to do?

SOS contributor Mike Senior replies: This is a common misconception about automation. Yes, a compressor can help a singer’s performance sit more solidly in position in the mix by making its signal level more consistent. However, there is a difference between signal level (judged in purely technical terms) and subjective level (in a listener’s perception), and that’s the first area in which compressors struggle to compete with manual automation. For example, when automating I might notice that the vocal is being masked at some points by cymbal crashes or ducked by the pumping of a master-bus compressor, whereas a compressor is oblivious to these things — it sees the vocal signal and nothing else. To be fair, there are now processors such as Waves Vocal Rider and Hornet AutoGain that do take a stab at this more context-related level processing, but there’s more to vocal automation even than that...

One big issue is lyric intelligibility. Fundamentally, I know of no plug-in that understands English — or indeed whatever other language the singer’s using! As such, the processing won’t recognise when specific syllables or consonants aren’t loud enough to be easily understood. As a human listener, I might recognise the need to boost, say, an ‘n’ sound and the sliver of consonant-vowel transition either side of it well beyond a technically ‘consistent’ level in order to make it understood, because I can hear that its relatively dull tone can’t push past the brightness of the arrangement at that point. A compressor simply isn’t that smart.

Furthermore, because manual automation is based upon your own emotional connection with the singer’s performance, you will naturally tend to boost things you love and cut things that you don’t. You might emphasise the onsets of certain words for a more urgent and energetic feel, or fade up the fragile tails of phrases in a ballad to bring out more pathos. For me, this is really where the magic happens with automation, because you frequently have the power to subjectively enhance both the apparent technical quality of the recording and its emotional impact. However, the only reason you can do this is because you have feelings — and compressors don’t. (Which is probably quite a good thing, or mine would be really sulky by now...)