Q. Can you explain how the 'Track Expansion Method' works? 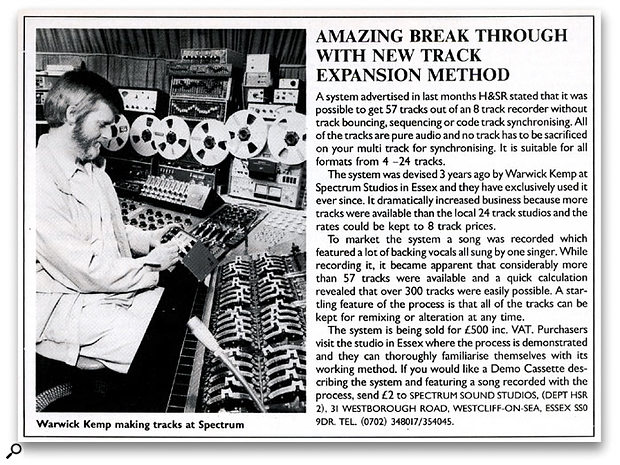 An original advert for the Track Expansion Method which appeared in the May 1988 issue of Home & Studio Recording.

Here's something that's been bothering me for nearly 20 years. Back in about 1986-7, when we were all taking out second mortgages to buy our Tascam 38s and Seck 18:8:2 desks, I used to subscribe to Home & Studio Recording. In the smaller adverts tucked away towards the back of the magazine, there was an ad for an amazing and inexpensive technique which, it was claimed, added many more audio tracks to your eight-track reel-to-reel tape machine. I don't remember it giving any details. My first thought was that it was some sort of sync'ing device slaved to a timecode track to give you extra MIDI capability, but there was something in the text to the effect that the extra tracks were audio not MIDI. Engineers I worked with at the time were as baffled as I was about these claims — it couldn't work! If it did, it would have been the Holy Grail of multitrack recording!

Can anyone at SOS remember these ads and, even better, does anyone have any idea what it was all about? I've lost hair and marbles thinking about this, so any help would be most welcome!

Reviews Editor Mike Senior replies: Several of us here at the office had recollections of these ads, so we headed for the capacious SOS archives and discovered (just on the left, past the Lost Ark) a set of old back issues of Home & Studio Recording. After a little hunting, we found a series of adverts placed by Mr Warwick Kemp of Spectrum Studios in Essex. He claimed to be able to get 13 tracks from a four-track machine and 57 tracks from an eight-track machine, all 'without track bouncing, sequencing, or code-track synchronising'. Furthermore, all tracks were apparently retained for remixing if required. The pricing in these adverts was £500 including VAT, and for this fee Mr Kemp provided one-on-one tuition in the mechanics of the process at your studio, as well as a hardware device to assist with the process.

After a fair bit of head-scratching in the SOS office, we figured that the scheme probably used some kind of submixing and synchronisation process, but we were unable to get to the bottom of how the system worked, so I set about tracking down Mr Kemp himself, and was surprised to find him at the same address, where Spectrum Studios is still a going concern. He explained that he had marketed his system of track expansion successfully for a number of years, and had users all over the world. The initial scheme with the hardware component (as shown in the adverts we found) wasn't that successful, and it also turned out to be a nuisance for Warwick to have to travel to studios around the country. He later refined the process into an instruction booklet which sold for a rather more affordable £49 — the hardware element, a type of monitoring amplifier not absolutely essential to the process, was abandoned. The booklet apparently did well for a number of years until the nonlinear editing and virtual tracks of digital recorders rendered the process obsolete for most musicians.

So how did the track expansion method work? The main trick behind it was a method that Warwick discovered for synchronising a multitrack with a two-track master recorder — in his booklet he referred to this as the Image Shift Monitoring (ISM) approach. For it to work you need exactly the same audio to be recorded to one of the tracks on each machine. You then pan the audio playback from the two machines to opposite sides of the stereo image, and make sure that both tracks are playing back at identical levels. With the machines playing perfectly in sync this setup produces a phantom mono image of the audio at the centre of the stereo soundstage. Any slip in synchronisation between the two machines is heard as a shift in the stereo positioning of this phantom image. 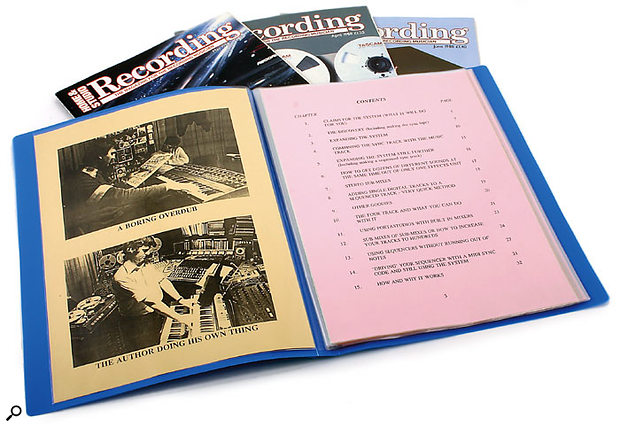 This stereo phenomenon occurs because of something called the Haas Effect. When you hear sound from a source off to your left, it reaches your left ear fractionally before it does your right ear, because your right ear is further away. Haas showed that the brain uses the interaural difference in the sound's arrival time as one of its tactics for perceiving the direction of the sound source. As a survival skill, detecting the source direction of sounds is very useful to us humans, so the brain is very sensitive to the very small timing differences involved. You can clearly hear sub-millisecond interaural delays as changes in stereo positioning on headphones, and this is the secret to the accuracy of Kemp's ISM.

The correlation between the playback timing offset and the position of the phantom image also made maintaining the synchronisation more straightforward. As long as the two audio tracks were rigged up the right way around (it was a simple matter of experimentation to find the correct way), the varispeed knob on the multitrack recorder could be used to 'steer' the phantom image's position as if with a steering wheel, which made it fairly intuitive to keep the synchronisation tight by guiding the phantom image back into the centre of the soundstage. It required a little practice, but the knack could be quickly acquired. Interestingly, Warwick has discovered since marketing his idea that similar synchronisation methods were used at the BBC and at Deutsche Grammophon, but that they were never considered as a means of track expansion.

'But the advert said that there was no synchronisation!' I hear you cry. Well, to be fair, 'code-track synchronising' was what was mentioned in the advert, and there is no timecode involved in the ISM process. However, the track used for synchronisation purposes has to be selected quite carefully. For a start, it needs to play pretty much constantly throughout the track in order to keep the two machines consistently sync'ed together — the drums therefore usually make a good choice of sync track. Warwick notes in his booklet that it helps if the sync track has a fair amount of transient information and a good degree of mid-frequency content, as this makes the stereo effects easier to track. It's also necessary to have a good long count-in (at least 30 seconds) to allow you to get the two machines exactly into sync before the music starts — at one point he even supplied a general-purpose pre-recorded count-in on a tape included with the booklet.

Once you can synchronise your multitrack and two-track machines, you can add extra tracks to a project whenever you like. For example, lets say you're recording a song to four-track and you've recorded tracks of drums, bass, guitar, and piano on a given piece of tape — we'll call it Tape A. Now you want to add backing and lead vocals, but you have no spare tracks. What you do is record the drums to the left track of your two-track machine while simultaneously submixing the bass, guitar, and piano to the right track. You then dub from the two-track recorder to a pair of tracks on a new piece of four-track tape, which we'll call Tape B, leaving two tracks spare for the vocals.

One might protest that this process is tantamount to track bouncing, which was specifically ruled out in Warwick's advertisement, but the difference is that you retain the original tracks for remixing at any time. To remix, you return to Tape A and record an updated submix to your two-track recorder as before. You then synchronise this two-track recording with the multitrack Tape B (using the identical drum tracks on the two machines to achieve synchronisation) and replace your original submix track with the new one from the two-track recorder.

Here's how you can extend the principle to get the 13 tracks out of a four-track machine which the advert claimed. First submix the whole of Tape A to one track of your two-track machine, and record it from there to a single track on each of three new pieces of tape: Tape B, Tape C, and Tape D. Once the resultant nine extra tracks have been recorded, Tapes B, C, and D can each be submixed to the stereo recorder using the submix of Tape A as the sync track. 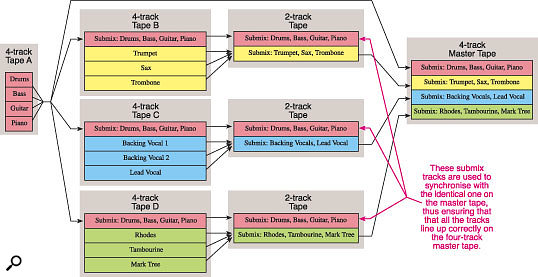 This diagram illustrates how the track expansion method would be used to record 13 tracks on a four-track recorder.

And of course, that's not the end of the story. If your recorder has the fidelity, you could submix your submixes to add even more tracks, the only limits being your recording technique and the noise performance of your studio — using a digital master recorder such as a DAT as the two-track machine helps with this considerably. Or you could combine this method with traditional track bouncing.

While maximising the raw track count is pretty vital when working on four-track, it isn't as important a consideration if you are using an eight-track recorder. In practice, Warwick found that he usually recorded his main arrangement on maybe five or six tracks, and then used the ISM technique to add massed backing vocals and synth overdubs on the final tracks. This approach allows you to mix down from the original reel, retaining individual control over the most important separate tracks.

An alternative use for the extra tracks mimics the role of virtual tracks on a digital system, where they give you the freedom to record multiple versions of a solo for comping, to store alternate takes, or to save unprocessed versions of processed audio tracks in case you change your mind at mixdown. These are all facilities that we rather take for granted with modern digital equipment, but which were very powerful features when analogue multitrack machines were still the norm in the home studio.

The only real disadvantage of the ISM scheme for many musicians of the time would have been that a two-track master recorder only allowed you to transport mono submixes between different bits of multitrack tape. However, this problem could be circumvented by anyone with more than one multitrack machine — just a three-track machine would do the trick. The ISM approach also has the downside that you end up using more tape, but that would probably have seemed a small price to pay for those who found themselves needing the extra track count.