Q. Can you explain the track routing in my Akai multitracker? 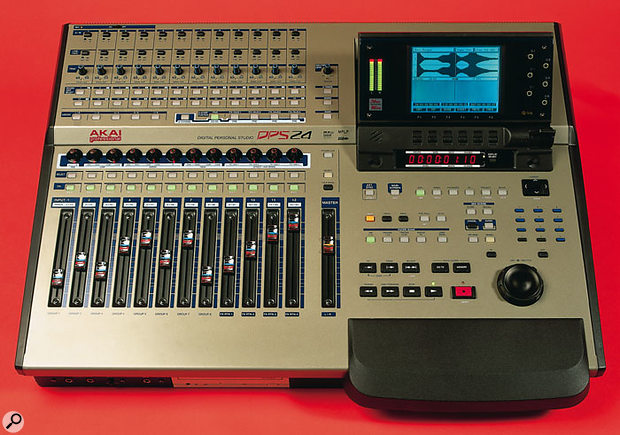 The Akai DPS24's use of mixer groups is grounded in traditional analogue recording and offers great flexibility to the user.

I have bought an Akai DPS24, which is great, but I am having trouble getting signals to disk tracks. I previously owned a DPS12 and that was fairly simple, but the DPS24 manual talks about using 'groups' to route inputs to tracks. What is a group and how are they used?

This way, any input can be routed to any track without re-patching. However, to make grouping more versatile, many desks send signals out to group output pairs — 1+2, 3+4, 5+6 and so on. The principle is the same except that the input channel's pan control is used to send the signal to odd- or even-numbered group outputs. Citing the above example, to get input 5 to track 3, you'd route it to group 3+4 and pan the channel hard left; to overdub the same input onto track 4, you'd pan it hard right.

Now, where it gets a bit tricky is that the DPS24's mixer only has eight (four stereo) group outputs to service 24 tracks. This is common on many mixers, and what happens in this case is that group outputs are 'doubled up', that is, each one is sent to more than one track. Let's rewind again to a more conventional studio for a moment... 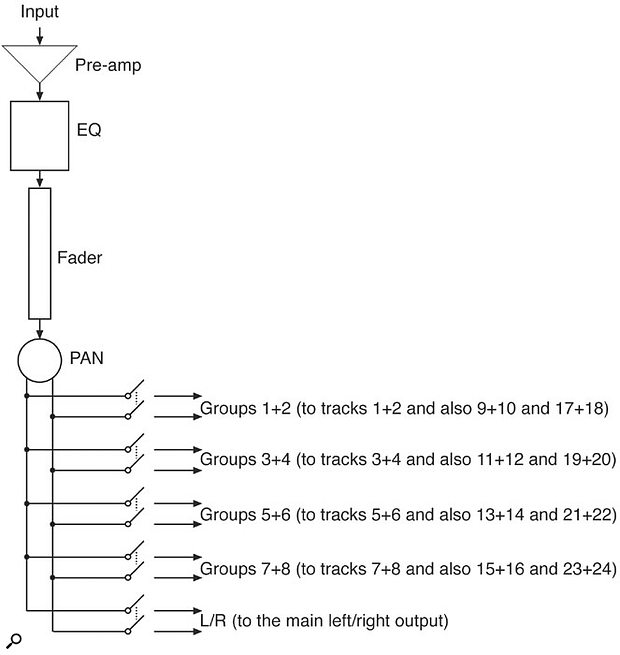 This simplified block diagram shows a typical input channel in an eight-group mixer such as the one found in the Akai DPS24.

It was common practice (mostly in the interests of economy) to limit the number of group outputs. Thus, it was not unusual to use an eight-group mixer with a 16- or 24-track MTR. What you would do in this case would be to connect group output 1 to tracks 1 and 9 of the MTR (and also track 17 in the case of a 24-track). Similarly, group output 2 would be connected to tracks 2, 10 (and 18), group output 3 to tracks 3, 11 (and 19) and so on. So, to get input 5 to track 11, you'd route it to groups 3+4 and pan it hard left, before putting track 11 into record. This is the principle used on the DPS24. It can take a bit of head-scratching at first but the panel is labelled accordingly to assist you (plus you just kind of get used to it after a while).

You might still be thinking that this is unnecessarily complicated for simple track laying but it has many benefits. For example, we have already seen how we can combine several inputs to a pair of tracks. Well, the same principles can be applied to 'bouncing down' tracks, that is, mixing down several tracks onto a stereo pair of tracks. For example, you might have 18 tracks of backing vocals (perhaps for that Queen number you're covering!). To free up those tracks, you can bounce those down to a stereo pair using the groups in exactly the same way simply by routing the BV tracks to a group pair (panning each track accordingly to create a stereo image) and enabling the appropriate MTR tracks to record. The fact that the process is consistent for inputs and tracks means that once you've grasped the basic concept, it's pretty straightforward.

Groups can also be very handy during mixdown. By sub-grouping certain instruments and then routing those groups to the main L/R output you can be controlling the master level of a whole section of instruments with just one fader. All your keyboards could be submixed to groups 1+2, your guitars to groups 3+4, drums and percussion to groups 5+6, backing vocals to 7+8 with other primary instruments having their own individual channels. Thus you can control the overall level of these different instrument groups far more simply.

Take the time to digest the possibilities and flexibility offered by the use of groups. It's a time-honoured practice that has been the cornerstone of 'traditional' recording studios pretty much since the inception of multitrack recording. Fortunately, in the case of the DPS24, it's all very consistent and there are no special modes or pages you have to enter — it's all available from the front panel (almost exactly like a traditional console) and once you've got the hang of it, you'll find groups your flexible friend in the track-laying and mixdown processes!

If it's any consolation, you can route any given input to any given track directly using the DPS24's flexible internal patchbay (there's even a patchbay template for this) but this requires delving around in the Mixer mode's pages. The group facility, however, allows you to route any signal (or combination of signals) to any destination in a very 'hands-on' way from just the front panel.