Q. Can you help me find the right amp-distortion freeware VST?

I'm looking for any VST freeware that can really do for amp distortion what convolution reverbs can do for sound reflection simulation. I am thinking of the work of now-defunct Johnson Amplification, where amps were modelled in some way that was a big step forward in processing technology, yielding extremely accurate digital simulation. Is there any kind of way to take the clean and amped signals of a guitar, and then replicate the sound spectrum change so that I can apply it to a recording of a clean guitar tone to simulate the same amp tone?Mike Van Wagner, via email

SOS contributor Mike Senior replies: It is possible to use convolution technology to recreate guitar-amplifier tones, but it goes well beyond the capabilities of the kind of convolution that we normally use for creating reverb effects. By the very nature of the way it works, normal static convolution can't capture dynamic effects such as compression, distortion and modulation treatments, so established freeware static-convolution engines, such as Christian Knufinke's SIR and Liquidsonics' Reverberate LE, won't be much help. Although you can find numerous impulse-response samples of a variety of guitar amps/cabs on the web, you'll find that they only model the frequency response and resonance characteristics of the source hardware, not the distortion. 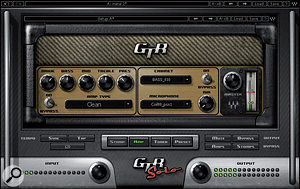 Although there are numerous freeware amp-modelling plug-ins available, there are also extremely affordable entry-level commercial products, such as Waves GTR Solo pictured here, which provide the 'one-stop' convenience of a range of reliable high-quality emulations within a single interface.

There are more advanced dynamic convolution processes around that are better equipped to deal with these kinds of challenges (the former Sintefex Replicators, Focusrite's Liquid range or Acustica's Nebula 3 plug-in, for example), but nothing I know of in freeware that will convolve a useful range of guitar amps. Even if you do invest in something like Nebula 3 (which includes tools to make convolution presets from your own gear), this still won't do what you're hoping, though: it will need to pipe a load of specialised test signals through the amp in question and then analyse the outcome off-line before it can attempt to recreate the amp's tone. Feeding it with simple DI and amped recorded signals won't give it the right information to work with.

To be honest, though, you don't need to tangle with dynamic convolution to find decent freeware amp modelling, because there are masses of options out there. (If you want some recommendations, there's a list of my personal favourites at www.cambridge-mt.com/ms-ch12.htm.) Quality is rather variable with freeware, though, so there's a lot to be said for spending a little money on a commercial software amp emulation if you have particular amp sounds you want and you'd prefer to just get on with making music. There are very affordable offerings from almost all the major players in the field, including IK Multimedia, Line 6, Native Instruments, Overloud and Waves.