Q. Do laptops sound worse when using an AC adapter?

A mastering engineer told me that, when playing back source files from his laptop into a high-quality USB-connected D-A, the masters sounded ‘worse’ if the laptop was plugged into its power supply, as opposed to running off the battery. He sent me ‘with and without’ comparisons and there was indeed quite a difference. He then went on to test the source files running from various USB, Firewire and internal hard drives, and maintains that internal drives for record or playback in real time (ie. not a data transfer) sound better than either USB or Firewire. What could be going on here?

SOS Technical Editor Hugh Robjohns replies: I’ve heard many similar claims — in particular that USB thumb drives sound better than external hard-disk drives — and have experienced the same thing myself on occasion. I suspect the answer lies in our old nemesis, the humble ground loop.

Ground loops are formed when multiple devices are interconnected in such a way that their local ground references are at slightly different voltages, and a current can therefore flow around a loop from one device’s mains safety ground, through the connecting cables to a second device, through that mains’ safety ground, and back via the building’s mains wiring. This ground current is largely inevitable and quite normal, and it really shouldn’t be a problem if the equipment is designed and grounded correctly. However, in some cases this ground current can find its way into the ground reference point of the electronics, and thus affect the equipment’s operation in some subtle, or sometimes not so subtle, way. 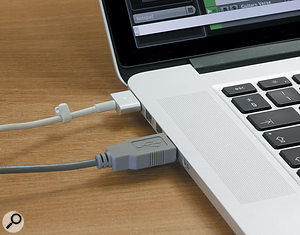 Running your laptop from its AC power supply can sometimes complete a ground loop — and in some cases that can be very bad news for the performance of a USB D-A converter.In the case of analogue equipment, if this ground current finds its way into an audio amplifier’s ground reference, it effectively gets mixed in directly with the wanted audio signal. Since the ground current is from the mains supply, it usually comprises a 50Hz (here in the UK; in some countries, including the USA, it’s 60Hz) fundamental with some harmonics, and we hear that as the familiar ‘ground-loop hum’.

In digital equipment, ground-loop currents might manifest as audible hums or buzzes, but more often than not they produce far more subtle effects and artifacts instead, because they end up interfering with the digital data in various ways, rather than the analogue signal. Consequently, ground-loop problems tend to alter the performance of D-A (and A-D) converters quite subtly — perhaps by modulating their ground references, or by inducing jitter into the clocking circuitry. Ground loops are very unlikely to corrupt pure data transfers between a computer and a hard drive, say, but may well affect any real-time conversion processes between the analogue and digital domains.

In the example you gave, it’s quite possible for a ground loop to be created between a mains-powered converter (and connected mains-powered amps/speakers) and a mains-powered laptop via the grounded RF shield within a USB or Firewire connecting cable. (The same applies to any external mains-powered hard drives too, of course). Disconnecting the mains adapter from the computer and running it on its internal battery obviously breaks that ground loop and removes whatever influence ground-loop currents were having.

As with analogue equipment, good design of internal grounding arrangements will minimise or negate these kinds of ground-loop issues and, again, as with analogue equipment, not every manufacturer has mastered this critical aspect of design. So some equipment might exhibit subtle problems, and some might not. With any ground-loop problems, the first step is to minimise the chances of a ground loop generating troublesome current flows by making sure that all connected equipment is plugged into adjacent mains power sockets (so that the mains safety earths are all at the same potential), not different sockets on different sides of the room!

If some of the equipment can’t be battery powered, the next step is to break the ground path between devices. Unfortunately, the simple and elegant solution for analogue ground loops — the line isolation transformer — isn’t so readily available for high-speed USB and Firewire connections.

USB isolators certainly exist, using either special ‘air-core’ pulse transformers or optocouplers. Sadly, though, most only support USB 1 full-speed operation at 12Mbps, not full high-speed USB 2 up to 480Mbps. Consequently, they might be fine for curing ground-loop problems with USB keyboards passing MIDI data, but probably aren’t adequate for multichannel audio interfaces.

BB Electronics make a commercial full-speed (12Mbps) USB isolator, and Analogue Devices offers the ADUM3160 and ADUM4160 isolator chips which have been used by Oleg Mazurov in a DIY isolator circuit. This also appears to be offered, ready built, by Olimex Ltd. Again, these are limited to a maximum data rate of 12Mbps.