Q. How do I achieve a reverb-drenched sound on a full mix? Skip to main content

Q. How do I achieve a reverb-drenched sound on a full mix?

A lot of the music I’m enjoying seems to be going back to an old-school sound of being swamped in lush reverb. Examples include the recent Ray Lamontagne, Escondido, Damien Jurado and Jesse Woods recordings. For this effect, is it best to put the reverb on the master bus or to leave it to the mastering engineer? Do we assume they have excellent reverbs at hand? And if that’s the effect we’re going for, is it better to leave all of the tracks themselves completely dry? Would a high-pass filter on the reverb still be advised? Matt, via email

SOS contributor Mike Senior replies: First things first, reverb is almost always best applied during the mixing process, rather than at the mastering stage, because that way you can selectively target the effect to give your mix a sense of depth. Some parts might have more reverb to push them into the background, for instance, while others might be left drier to keep them subjectively closer to the listener. So, for example, in the first verse of Ray Lamontagne’s ‘Be Here Now’ there’s a lot less reverb on the lead vocal and acoustic guitar than on the piano and strings, hence the latter appear considerably further away from you. 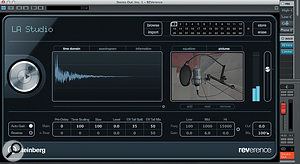 If your songs trade on lush reverb, should you be putting a reverb on the master bus? Probably not...As to whether the reverbs those productions are using are ‘excellent’, that’s a question of definition as much as anything — there’s no absolute quality benchmark when it comes to reverb processing for popular-music mixing, because different reverb types are often used for very different purposes. For example, there are many classic reverb units that are a bit rubbish at simulating convincing acoustic spaces, but which are popular for other reasons — perhaps they flatter the timbre of a certain instrument or enhance its sustain. However, I suspect from your stated references that you’ll get most joy from realistic acoustic emulations and smooth plate-style patches, both of which can be found very affordably these days, and may even be bundled within your software DAW system.

The difficulty with lush reverbs, however, is avoiding mix clutter, and high-pass filtering the reverb returns, as you suggest, is therefore usually advised to tackle this. More in-depth EQ may also be necessary, and the best way to tell if it’s needed is by toggling the reverb return’s mute button while you listen to the overall mix tonality. If the mix suddenly gets a bit ‘honky’ when you switch in the reverb, then that might be an indication that you need a bit of mid-range cut, say. Another trick that I find extremely handy in this kind of context is to precede the reverb with a tempo-sync’ed feedback delay, because this helps lengthen the sustain tail of the reverb without completely washing the mix out, and also keeps instruments from being pulled as far back in the depth perspective by the effect. I’d also recommend not feeding too many different instruments to the same reverb when you’re using long-decay patches, because that makes it easier to filter out elements of a specific instrument’s reverb that you don’t need, without affecting other parts, which can further improve the clarity of your overall mix texture.