Q. Do I need a dedicated FM soft synth? 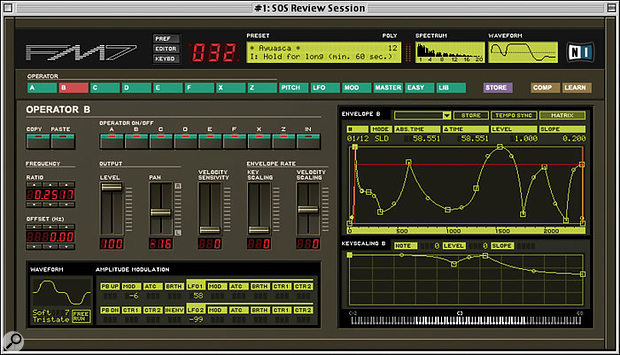 Native Instruments' FM7 soft synth is equipped with six operators, each with a 31-stage envelope which can be edited from this screen.

I'm too young to have experienced the first wave of FM synthesis, but I find those sounds very interesting. I was considering buying Native Instruments' FM7 soft synth, but I've noticed that many virtual analogue soft synths claim to offer FM capabilities, and provide virtual analogue besides. Is there any advantage to the extra expense of something like the FM7?

SOS Contributor Craig Anderton replies: If your interest in FM synthesis is at all serious, then yes, there are advantages to dedicated FM soft synths like Native Instruments' FM7. But to understand why, it might first be helpful to explore some FM synthesis basics.

The basic 'building block' of FM synthesis is called an operator. This consists of an oscillator (traditionally a sine wave, but other waveforms are sometimes used), a DCA to control its output, and an envelope to control the DCA. But the most important aspect is that the oscillator has a control input to vary its frequency.

Operators can be arranged in many ways, each of which is called an algorithm. Basic Yamaha FM synths of the mid-80s had four operators. A simple algorithm suitable for creating classic organ sounds is to feed each operator's output to a summed audio output, in which case each operator is a carrier. A more complex algorithm might feed the output from two operators to the audio output, with each being modulated by one of the other operators. Or, Operator 1 might modulate Operator 2, which modulates Operator 3, which modulates Operator 4, which then feeds the audio output. The latter can produce extremely complex modulations. Sometimes feedback among operators is also possible, which makes things even more interesting.

So more operators means more algorithm options. The Yamaha DX7 had six operators and 32 fixed algorithms; FM7 actually offers considerably more power because it lets you create your own algorithms.

A virtual analogue synth that offers FM typically allows one oscillator to modulate another one, essentially serving as a primitive two-operator FM synth with one algorithm. While this is enough to let you experiment a bit with simple FM effects, the range of sounds is extremely limited compared to the real thing. You'll be able to get some nice clangy effects and maybe even some cool bass and brass sounds, but don't expect much more than that unless there are multiple operators and algorithms.