I'm looking to buy a moving-fader control surface for my DAW and I'm wondering if it's worth paying a bit extra for one with touch-sensitive faders. How important a feature is this? I understand the principle behind them — that touching the fader knob completes an electrical circuit, and the system responds by giving you control of the fader (disengaging the motor) and recording any fader movements — but so what? I've seen other control surfaces advertised which are not touch-sensitive but nevertheless automatically disengage automation when you move a fader by hand. Are there some other advantages to touch-sensitive faders that I'm missing? 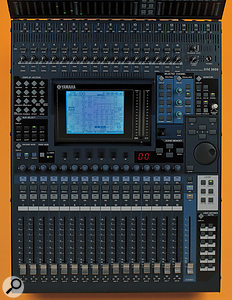 The touch-sensitive faders, like those on the Yamaha DM1000, are a useful feature, once you get used to using them.Technical Editor Hugh Robjohns replies: I find that touch-sensitive faders can be a real mixed blessing. They are very handy — even essential — when mixing with automation because they allow the system to drop into automation record mode the moment you touch the fader, and stop recording automation as soon as you release it. They also stop you having to fight against the fader motors, which aren't always that quick to respond.

However, for general live mixing with a digital desk, I find touch-sensitive faders a complete pain. I am currently using a Yamaha DM1000 which, by default, assigns the channel whose fader you are touching to the control screen for adjustment. This is all well and good until you want to keep your hand on one or more faders at the same time to adjust their channel levels while also wanting to adjust some other channel settings on the screen! Needless to say, I now have this touch-sensitive channel selection mode switched off.

Another potential problem with touch-sensitive faders is that if you have particularly dry skin or move the faders with long finger nails, the system may not detect that you have moved the fader at all, resulting in no change in sound level. Then, when you grab the fader harder in desperation, the system suddenly realises it has been moved and implements a step level change to the new position! Careful setting of sensitivity thresholds can help, but it is an inherent problem with all touch-sensitive designs.

Overall, when properly implemented and adjusted, touch-sensitive faders are probably more of a help than a hindrance — although you will have to adjust to using them. If you can afford such a system, I would seriously consider it, especially if you use a lot of track automation.