Q. How could I use Giga-format libraries in the future?

Over the last few years I've collected quite a few sample libraries in Giga format, but now that Tascam have discontinued development I'm worried I might not be able to use them in future. Could I switch to another software sampler, and if I did, would my libraries sound the same?

SOS contributor Martin Walker replies: First of all, there's no reason why you can't continue to use your Giga libraries for the foreseeable future within Gigastudio or the VSTi-compatible GVI (Giga Virtual Instrument) installed on your current PC. I've still got both installed on mine, and they continue to run as before.

What may prove a problem in future is if you upgrade your PC to one that has hardware components that the final versions of these two applications don't recognise, or that prove incompatible with them. For instance, both Hyperthreading and multi‑core processing issues took considerable time for the GS team to resolve in the past, while a few musicians gave up trying to get GS3 to run smoothly on certain PCs. No fixes will now be written to cure any such problems that might occur in the future. Moreover, while the final version 4 of Gigastudio should run on powerful PCs containing four or more cores, it can only take advantage of two of them, which will undoubtedly cause frustration.

The final Gigastudio 4 and GVI 3.5 both rely on Syncrosoft dongles for protection (as used, for instance, by Steinberg's Cubase), which at least means that you shouldn't have any authorisation problems. Just install the software on your new PC, plug in your existing dongle containing the GVI licence and, hopefully, carry on as before. However, GS3 and earlier versions use a system‑specific challenge/response system, and Tascam's automated on‑line authorisation system is no longer running. Any software that uses challenge/response protection faces the same scenario if development ceases or the developer goes out of business.

Thankfully, Gary Garritan (www.garritan.com) purchased the Giga Technology assets from Tascam in April 2009, along with the rights to the Giga trademarks, and hopes that anyone who owns Giga‑format sample libraries will be able to use them in his future products. He is also talking with other library developers to 'explore various options', and may even revive some Giga products in the future.

You could instead switch to another software sampler that offers a Giga import option, such as HALion (www.steinberg.net), Kontakt (www.native‑instruments.com), or Samplelord (www.samplelord.com), and the sample data will be exactly the same after each library has been converted, and so should most loop points, key mapping, velocity zones, and so on. Logic's EXS24 (www.apple.com) offers a similar import function for Mac users.

However, each sample playback 'engine' offers a different feature set, so after the conversion to the destination format, your libraries may not sound quite the same. For instance, some parameters from the source format may have no equivalents in the destination format, while others, such as velocity response, envelopes and filtering, may 'feel' different.

Dedicated conversion utilities tend to be more thorough, as well as offering ever‑more‑comprehensive conversion options, so if you're disappointed with the import option of a new software sampler you could try products such as CDXtract (www.cdxtract.com), Extreme Sample Converter (www.extranslator.com) and Translator (www.chickensys.com). 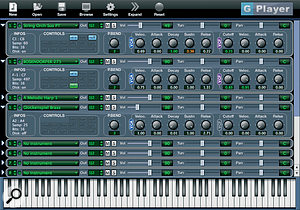 Owners of Giga‑format libraries can play them back in a variety of other software samplers, albeit with a few caveats, while Mac users can even load them into a native 'Giga' file player, Soundlib's G‑Player, shown here.However, the great white hope for Mac OS X users is Soundlib's G‑Player (www.soundlib.com/gplayer), which is an application that can natively play all of Giga's popular sound libraries (even the large orchestral ones) without prior conversion, and it supports disk streaming, dimensions, keyswitches and layered instruments.