I've just read up about star-quad cable, which has internal cores that cancel each other's interference — like a humbucker? Would you use star-quad cable in preference to ordinary balanced cable? I'm thinking in terms of microphone cables of 10 metres in length, for use at home. 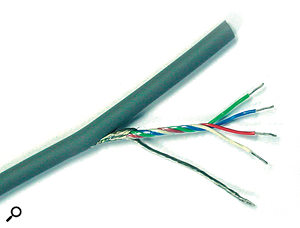 SOS Technical Editor Hugh Robjohns replies: For the uninitiated, there are four cores in star-quad cable — the clue is in the 'quad' part of the name — plus an overall screen. The screen helps to prevent electrostatic interference from reaching the signal cores, just as in a conventional cable. The four cores are very tightly twisted with each other and rotate over a relatively short length, known as a 'short lay length'. This arrangement results in a magnetically coaxial structure and provides greatly improved rejection of electromagnetic interference compared to standard two‑core mic cables — perhaps by as much as 20dB.

As the diagram shows, the four cores are arranged in a cross formation, and the opposite cores are wired in parallel to form a single balanced pair. Obviously, with four wires in the cable, the core‑core and core‑screen capacitance will be much higher than in a more conventional two‑core cable, and that's the down side because it can result in a greater HF loss in very long cable runs — although it really won't be a problem over 10 metres, or even 50.

The red and blue cores are wired in parallel to form one half of the balanced pair, and the green and white cores form the other half. Some star-quad cables use two white wires for one pair and two blue wires for the other.

The up side is better rejection of very close‑source electromagnetically induced interference — the kind of interference that might come from laying a mic cable alongside something that radiates strong and nasty interference (some kinds of mains dimmer cables, for instance).

To understand how it works, consider a standard two‑core mic cable lying for a short length alongside a nasty interference source. Some of that interference will break into both cores, and to be rejected by the balanced input of whatever the cable is connected to, the induced interference must be equal in amplitude on both cores.

However, there will be slightly more energy transferred into the core that's closer to the interference source, and less into the further core. Since the two cores usually twist around each other in a fairly long lay length down the mic cable, there's a very good chance that one core will pick up slightly more interference from that close source than the other core, and the result will be some audible interference because the imbalance means it won't all get rejected. 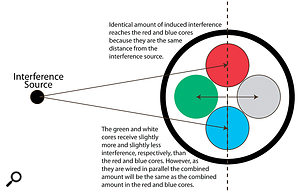 Star-quad overcomes this problem because of the the way the four cores are wired in opposite pairs. Replacing the standard mic cable in the example above with star-quad, we can imagine that one pair of wires may be directly above one another vertically, and will therefore pick up equal amounts of interference because they are exactly the same distance from the nasty cable lying alongside. However, the other pair will be horizontal, and that means that one core will be slightly closer to the interfering cable, while the other will be slightly further away. The differences in distance of these horizontal cores relative to the vertical cores will be equal but in opposite directions, and the average interference in the two horizontal cores will therefore hopefully be exactly the same as that of the two vertical cores. Hey presto! Much better balance of interference and therefore better rejection. The very short lay length of the core twisting also helps to make sure that any interference is induced equally into the the two paired sets of wires.

The star-quad configuration was invented for use in telephone cables back in the '30s, and was adopted in the TV world in the '60s and '70s. It is widely used today, particularly where there is a likelihood of having to lay mic cables alongside strong sources of interference.

As to whether I would use star-quad in preference to ordinary balanced cable, I wouldn't, particularly. With that short a cable run, and in a domestic situation, interference isn't likely to be an issue at all. There's no reason not to buy star-quad if you can get a good deal, but I wouldn't seek it out specially, as you're very unlikely to gain any significant benefit. I'd look for a decent two‑core cable from a reputable supplier. I particularly like double‑screened cables ('Reussen' screen), which are also widely used in broadcasting.