Q. How do I make guitars sound more 'epic'? 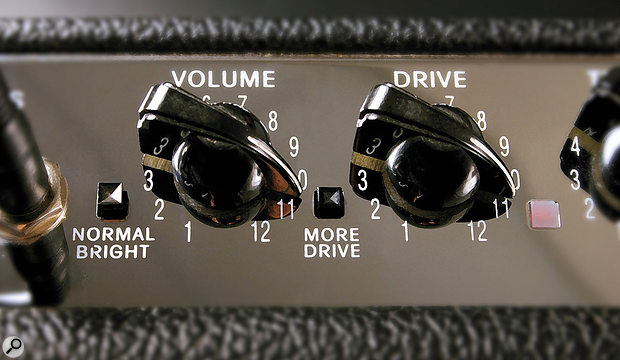 You might think more drive would result in a bigger, dirtier guitar tone, but when double-tracking you probably want to back off the gain a bit.

I've been struggling with recording and mixing 'epic' guitar sounds. I'm after something that balances aggression with tone, but which doesn't sound too distorted like so many contemporary hard-rock records do today. Do you have any tips that might help?

SOS contributor Mike Senior replies: Well, the first thing to say is that a lot of rock styles use double-tracking to make the riffs sound fuller, and in that situation the distortion 'hash' tends to build up quite quickly. Therefore one good way to get a sound that's powerful, but without harshness or loss of note definition, is simply to give each of the individual recording passes a bit less amp gain than you instinctively feel they need. I think you'll also tend to get recorded guitar tones that are more solid and present if you concentrate on building the sound in the live room, not the control room: experiment with different instruments/pickups/amps; adjust playing techniques and amp settings; change the position of the amp in the room; try different mic positions; or even blend several different mics together. In particular, I find multi‑miking offers tremendous sonic potential if you learn to make the most of it. (If you'd like some more detailed pointers there, check out my Session Notes article on the subject back in SOS August 2013: https://sosm.ag/session-notes-0813)

From a mixing perspective, there are a few crucial variables to consider with electric guitars. Firstly, how much low mid-range do you give to the guitars, in comparison with how much you give to all the other instruments in the arrangement? If you want your guitars to seem fat and full, then you should consider scooping out a good deal of that spectral region from the bass guitar, for instance. That way, you can give the guitars plenty of low mids without overburdening the mix as a whole with those frequencies. Another thing many people don't realise is that what they're hearing as 'guitar' within a combined bass-plus-guitars texture is actually coming from mid-range bass-guitar distortion components. The thing with distorted bass tones is that the distortion harmonics remain comparatively musical even at high gain, because the instrument only usually plays one note at a time. Electric guitar chords, on the other hand, can quickly dissolve into tuneless shred when distorted. So if you want more aggression from the overall guitar texture in your rock track, but without compromising clarity, then try adding distortion to the bass rather than the guitars.

The 2-4 kHz region can be a bit of a mixdown battle zone as well, because it gives the guitars their 'bite', but is also a critical frequency range for vocals, snare, cymbals, and many synths. Personally, I'd suggest trying to cut as much 2-4 kHz out of the cymbals as possible, because otherwise they can mask other tracks so strongly that by the time you've faded your guitars up so you can hear them, the mix sounds harsh overall. Another dodge is to use a side-chain triggered ducker to pull down the level of the guitars whenever the vocalist is singing.

Quite often, I see people compressing overdriven electric guitars — but it's really not necessary most of the time, because the overdrive will already be reducing the dynamic range by its very nature. In fact, by removing the last vestiges of musical dynamics from the part, compressing can actually be counterproductive, in my experience. Furthermore, compression won't necessarily help much in balancing the part, because the timbre of a guitar depends so much on how many notes it's playing simultaneously, and what the intervals are between them. So even if you manage to nail a guitar track's signal levels to the wall, a single note will still have a purer tone that cuts easily through the mix, whereas a closely-voiced minor ninth chord will break up into a fuzzy mess that gets lost behind the sounds of other instruments. The best way to deal with those kinds of balancing issues is with multing and/or automation, not compression.

Which brings me to my final guitar-mixing tip. Because overdriven guitars inherently have less dynamics than other instruments, they don't adjust their balance to changes in the arrangement very much, and this is where level automation can really help out, riding up those musical moments that are important, and riding down those that aren't. So you might have the guitars lower in the mix during vocal sections to avoid masking the lyrics, but then turn them up for the monster riffs! I'm also a big fan of giving each new guitar entry its own little momentary automation push, just for the first couple of beats it plays. This makes the listener feel that the guitar's really powerful when it first arrives (because it really is a bit too loud!), but by the time they've formulated the thought that it might be out of balance, it's already moved back to a more sensible mix level. It's a classic piece of mixing sleight-of-hand, and something I use all the time!