Q. How should drums be panned? 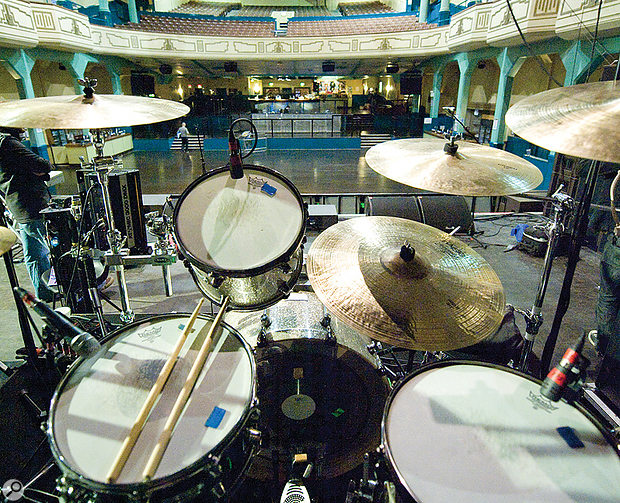 Two different 'natural' views of a drum kit — note that from the audience's point of view the drums really won't sound that wide!

How should I pan my drum recordings in the mix? For instance, should the hi-hat be on the left or on the right?

SOS contributor Mike Senior replies: Like a lot of questions of panning, there's no 'industry standard' defining which way around you should orient the drum kit's stereo image at mixdown. Some people argue for a stereo spread with the hi‑hat on the right, on the basis that this matches the orientation you'd see if watching the drummer's performance at a concert — the so-called 'audience perspective'. However, while there's no denying this argument's intuitive power, the fact remains that plenty of high-profile engineers actively prefer to pan the kit the opposite way around for some (or all) of the following reasons. 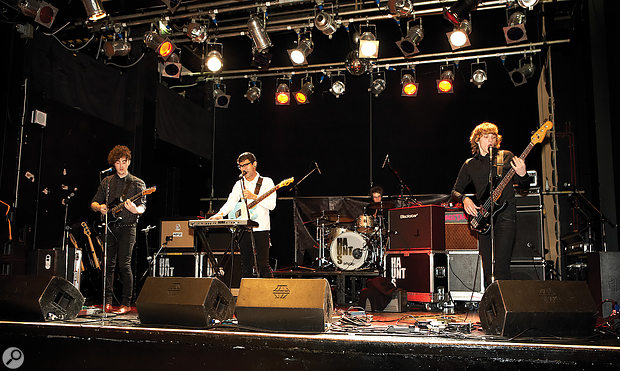 When you hear a drum kit from any typical (or safe!) listening distance, it actually presents very little stereo width at all. Certainly, in any unamplified concert scenario all parts of the kit will effectively appear to be coming from the same location. This weakens the argument for any obvious stereo panning of drum components on grounds of acoustic realism. (In fact, there are some producers who prefer to keep their drums pretty much in mono for that reason.) Besides, if you look at the other things that are going on in most band productions, there are usually lots of other parts that undermine the notion of real-world performance at least as much as any deviation from audience-perspective drum panning. Massed backing vocals clearly overdubbed by the same singer, say. Or the rock stereotype of dry, tight kick drum combined with super-ambient snare. Or layered delays and reverbs which change through a song's timeline. Or piano recordings where the pitches pan neatly left to right. Or dry synth sounds which have no acoustic connection with other instruments in the arrangement. Or, indeed, the snare drum almost always being central in the stereo image, when it's clearly not central in the kit itself. Fundamentally, most record productions are confections, inflating and enhancing reality rather than simply documenting it.

If you accept this premise, then another panning argument begins to gain greater currency, namely the 'player's perspective' approach, where the imaging of stereo-recorded instruments is presented at mixdown as perceived by the performer [see main photo above]. On the most basic level, this puts the listener into the performer's shoes, so to speak, which may provide a more immersive listening experience, and which also makes a certain amount of intuitive sense given the up‑front sonic perspective of the main instruments in many modern mixes. A stronger argument for me, though, is that if a fan wants to play their own drum kit alongside the record, then the stereo positioning of an audience-perspective drum kit recording will seem the wrong way around compared with the live kit. Yes, they might be able to switch their headphones over, but many drummers now use in-ears for monitoring, and you can't just swap those the way you can traditional cans.

Now, all of that said, there are some technical considerations to bear in mind. If you're mixing a track to accompany visuals, then the argument for matching the on-screen drum positioning (ie. usually audience perspective) at the mix may be stronger. Many videos do a lot of cutting between camera angles, though, so it's not necessarily that clear cut in that instance either. More of an issue, I think, is if the drum kit was recorded in the same room with other instruments. For example, if your drum overheads have heavy spill on the left side from, say, an electric guitar, but you want to have the guitar's own close mic panned to the right-hand side, then you may want to reverse the drum kit's stereo image to give a better match.

The main thing to reiterate, though, is that most of these decisions are essentially personal preference, and I suspect very few punters really care a great deal, to be honest (judging by the way many consumers position their loudspeakers and share earbuds). Come to think of it, I can't actually remember the last time any artist asked me to swap over my drum kit image on a mix I'd done for them, and I imagine the story's probably the same for most other engineers too. So I wouldn't lose too much sleep over it, whichever panning option you choose.

SOS Reviews Editor Matt Houghton adds: I personally tend to keep acoustic drums fairly narrow in most mixes, as this can help other instruments (a wall of guitars for instance) to sound much wider by comparison, and in that context minute decisions about the panning of kit pieces tend to make less of an impact. But if you prefer a wider drum image, it's worth pointing out that not all drummers are right-handed and not all like their kit pieces set up in the same place — so there can obviously be no golden rule about which side the hi‑hat, snare or floor tom needs to be (unless, as Mike says, it needs to reflect a specific on-screen setup).

Another thing I'd add is that it's quite common to use stereo overheads or room mics to provide the main image of the kit (rather than act purely as cymbals or ambience mics, respectively), and then reinforce those with processed close mics. In such a scenario you really want to be aiming for the close mics to be panned to match the main image... and if you do that, you should route all your drum mics to a dedicated drums bus, which will allow you to use the pan pots to widen or narrow your drums in the context of the mix, without changing that relationship between the main OH/room and close mics.