Sequential founding father and synth designer Dave Smith made time at the inaugural Synthplex 2019 exhibition/conference in the USA to discuss the current state of play of the wonderful world of synthesis.

You've got a very impressive roster of instruments now under the Sequential name. You're one of the few companies here at Synthplex who still have regular keyboards and synths, though you've created some Eurorack modules too. What's your take on where that scene is heading at the moment?

Dave Smith at Synthplex 2019."It amazes me how much it just continues to grow. It's great because people aren't stuck in just analogue or digital; you can mix everything and there are so many modules out there, from the whacky to the sublime. It's just fun seeing people actually playing with synthesis, because it's not like a programmable synth; you kinda have to know what you are doing to make a modular produce sound. You can't just buy it, turn it on and sound comes out. You have to figure it out. You need an oscillator. You probably want a filter... you probably want an envelope and a VCA, or something, and you have to put it together. You have to patch it to work. So getting that many people — even if it's just for fun or if it's just a hobby, or you only do it for a year, whatever — learning synthesis is good ultimately for us.

"At some point, you might get tired of having to start over every day on your modular, whereas with our instruments you press a button and it comes back exactly the same."

Well, you answered that exact problem many years ago. Before the Prophet 5 you had no memories, you had no polyphony; the scene we have in Eurorack today was what you found back then and you and Sequential helped transform it.

So what do you think now is the relationship between the Eurorack customer/user or musician and more kind of traditional, professionally produced instruments from yourself? Do you think people migrate between them or are there two completely different camps?

"Well there are definitely two complete camps but there is also a lot of migration in both directions. A lot of people have been playing regular slab synths for a long time and they try that [modular] and it's like an entry-way drug. You get your little modular and before you know it you're buying a new module every couple of weeks and it just kinda grabs you."

That could get expensive...

"Well, when it's only $150 to $300 dollars a pop, you can talk yourself into that. It's not like you are paying $2000 dollars outright for a synthesizer. You can say 'I'm just going to buy this, I'm just going to buy that'... Now it may end up that after not too much time you have spent that much money ultimately. But I see them as two different things. People who start with modulars will often move on to a polyphonic programmable synth, and other people who've been playing polyphonic synths will decide they want to play around with a modular system."

How do you see MIDI's role in Eurorack? Do you see it becoming more attractive to that market or necessary?

"I don't know enough about the market to know what people want and what's coming in and what's going out. It seems to me that MIDI should be used for what it's good for. It's a great tool and it doesn't necessarily have to be just for getting notes into the system. It's almost like somebody should build a modular system where the patch cords are MIDI, or something. Maybe it doesn't really know what's at this side, it just drives something in MIDI format that plugs into the next module. Certainly MIDI and MIDI-to-CV would allow for programmability on a large scale. I think some companies are already doing that. Design-wise, it's a trivial exercise to build something like that. So you could add programmability to a modular if you wanted to and interact with MIDI, but I'm sure some people probably want to stay solely in the CV/Gate world and other people want to expand it to other areas."

Well, I see a lot of people struggling and wrestling with their setup and I think, 'haven't you ever heard of MIDI?' 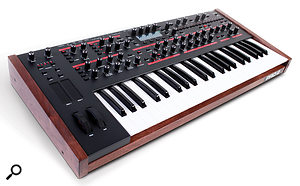 The Pro 2.Photo: Richard Ecclestone"Yeah, there is that. We have our Pro-2 synthesizer. It's a monophonic synth with a really nice sequencer in it, but it has four control voltage inputs and four CV outputs and a Gate output. You can assign those to anything inside the synth, so they could control an LFO, an envelope, something for the sequencer or keyboard — like aftertouch; or it could be a bunch of those combined and added together. And then you save it as a patch, and the next patch could be completely different routing. So as the centre of a modular system it makes a lot of sense. Now that's still not technically using MIDI, but of course you can interface MIDI to the Pro-2 and synchronise your sequencer clocks and LFOs to the rest of a MIDI rig, if you happen to have one."

Here at Synthplex it's wonderful that there's quite a lot of modular performers, when even two or three years ago it seemed that the scene was not about performance at all. It was all about individual people with individual rigs making the noises and sounds themselves and not trying to be anything recognisably musical. But now I think you are seeing that and maybe as it is maturing then the need for some form of storage and some form of being able to recreate or recall is going to become more necessary?

"Yes, it certainly makes it easier. There are certainly people like Suzanne Ciani, who tours with her Buchla. The wiring stays as is but every time she performs could be a little different. What's working, what's not working. What got misplaced and so forth..."

So in conclusion Dave, you're obviously happy to come here to Synthplex. What is your feeling in general; do you think the whole world of synthesizers is possibly poised for a major explosion and adoption by mainstream musicians?

"That's actually already happening. So many of our customers are horn players, drummers or bass and guitar players. It's already gotten beyond the specialist engineer/technical guy. A lot more women are playing synths now, which is awesome and overdue. So no, I think it's already happened in the last five or six years and we're certainly in the right place at the right time. So I'm happy."