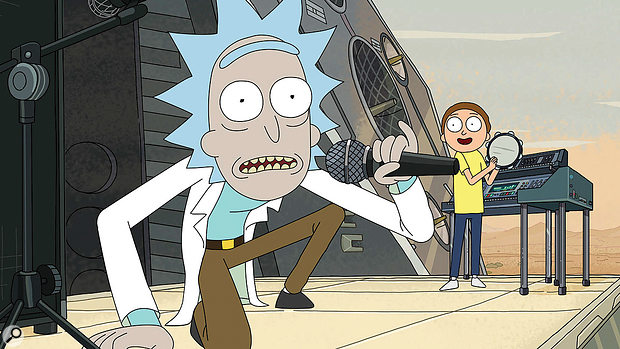 Rick Sanchez used a custom Sennheiser e935 mic for his vocals on the song 'Get Schwifty', which also happened to save our solar system.

TV network Adult Swim, hub of hipster animation for the last two decades, has become as infamous for its audio as for its plentiful memes. Its shows in the past, for instance, honoured April Fool's Day by switching their audio tracks around, unannounced, just because they can. The channel, run out of Atlanta's William Street Productions, has spawned several music compilations that embrace extreme genres and artists, like Arca, Prurient, clipping. and Tanya Tagoq, who also occasionally inhabit its quirky programmes.

Adult Swim's biggest hit so far is Rick And Morty, the internationally syndicated series that follows the adventures of dissolute scientist Rick Sanchez and his 14-year-old grandson Morty. It's Doctor Who, but with better drugs and an adolescent instead of the dog to blame any noxious odours on. Last year, Rick And Morty picked up Adult Swim's first Emmy Award, for Outstanding Animated Program, even as it inspired riots in McDonald's fast-food outlets by demanding the return of Mulan-inspired Szechuan dipping sauce. A soundtrack album released last September featured tracks from Mazzy Star, Blonde Redhead, Chaos Chaos and Belly — but those were garnish to the score, theme and special-material songs. Written and recorded by Ryan Elder, these ingredients have been at the core of the programme's success.

Elder graduated from college in Minnesota in 2000. The next day, he drove to Los Angeles, where a distant relative working as a producer at a commercial studio in Santa Monica got him a typical runner's job. Prior to that, his audio experience had consisted mainly of doing beats on the IBM 8086 computer his father used for some hobbyist home recording. "It booted off of a five-and-a‑quarter-inch floppy and had no hard drive," recalls Elder, who also learned violin, guitar and keyboard skills during this time. "So, I was introduced to using MIDI and computer recording when I was very, very young. Growing up in Minnesota, I was in bands in high school and recording on four-track tape and stuff, too. In high school, I wanted to be a record producer. My heroes were Butch Vig, Daniel Lanois. These guys were really kind of the geniuses behind the records that I loved." 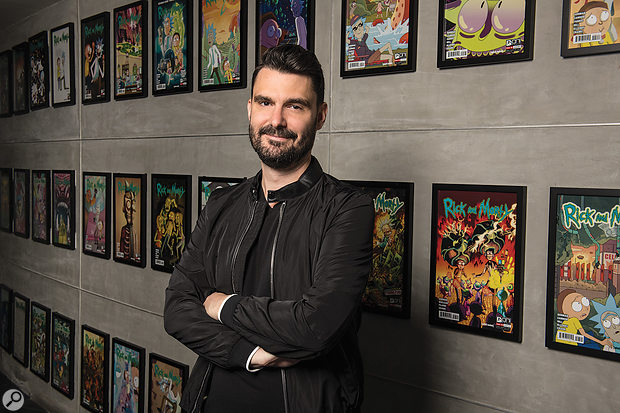 As it turned out, the variety that a commercial music house offered was a good training ground for the diversity of music that Rick And Morty would demand. It also put him in Hollywood's post-production milieu where, in 2006, he met Justin Roiland, who, with partner Dan Harmon, was developing various animation series. One of those, Dog World, needed a theme song, and Elder concocted one, using his growing collection of synths, including a Korg Prologue and Microkorg, Moog Rogue and Yamaha DX7 and DX100, as well as Native Instruments Kontakt libraries.

From his basic kit, Elder is able to weave the surprisingly textured underscores that give the show some cinematic heft. "Justin wanted a very cinematic effect for the theme music, and that it take itself seriously, versus the comedy of the show," he explains, citing shared influences like the scores to Farscape, Alien and Planet Of The Apes. "I'm also very heavily influenced by Jerry Goldsmith, and Doctor Who," he says. "I credit Justin for having that vision of having the music be very classic sci-fi."

Dog World went nowhere, but its theme's sci-fi sound, based around a lead played by a Theremin-type single-note sound buttressed by thick string-and-brass orchestral pads and crispy electrical short circuits, was perfect for Roiland and Harmon's next project, about a saucer-flying genius named Rick and his grandson Morty. The rest, as they say in Hollywood and elsewhere, was history. The commercial studio, prosaically named Admusic at the time and later Emoto Studios, provided Elder with a small studio he could use as a base. There, he also worked on a number of other animation shorts (Rick And Morty's 30-minute length was luxurious in 2013, when much of Adult Swim's programming consisted of 15-minute shows) for Roiland's seminal Channel 101 project, part of what Elder calls "this sort of DIY, pre-YouTube short video-making world in LA back then.

"They were kind enough to sort of front me a project studio there, and then I had access to their main room as well, so, I had my project studio there, and eventually they allowed me to buy all my gear off of them, including the iLok, which was fully stocked with plug-ins," he says. "I took that stuff back to my apartment and started building out what I wanted in my own project studio. Actually, my studio has gotten smaller and smaller since then, because I have found that I just need less stuff. A lot of people get into this trap of collecting outboard gear and instruments. I had an '81 Rhodes that I loved, but I was just like, 'This takes up so much space. I don't really use it that often because I'm not a keyboard player. Even though it's cool to have, let me just get rid of it.' So, I've downsized a lot to make my workspace as lean and mean as possible."

Ryan Elder has learned to wring a lot out of a little, digging deeply into the software to find what he wants. "These sample libraries are extremely powerful; you can utilise basically every knob on your keyboard. A lot of them have keyswitches where you can change articulation. So, say I've got my cellos playing an arco [bowed] section, very long notes. Then, I'll use C1 to trigger the long notes. Then I need to do a short section, I'll use C#1, which triggers the short articulation. So you get a lot of power and flexibility out of these libraries by using these keyswitches and then using the mod wheel for dynamics and swells. The dynamics are important, as is the actual recording of the instruments playing [at different volumes], which makes it sound more real. The expression wheel adds a secondary dynamic layer.

"Some of [the sample libraries] are just absolutely spectacular and have a lot of the sort of textures and sounds and the ability to manipulate them in a way that is original to whatever I'm creating. In particular, some of the ones I use a lot are made by Project SAM. They have several libraries called Symphobia, which have a lot of the textures and kind of orchestral palette that I use. All the Project SAM stuff works really well together because it's all recorded on the same stage with the same mics and the same reverb and other processing, so it blends well together. Then, there's other libraries I really like — Cinematic Strings is really good for the strings; CineBrass for the brass is really good. They have a lot of the instruments and all the articulations that you would want.

"In the mix, I'll put an Altiverb [reverb] on a bus and I'll bus each individual orchestral element to a different level until it blends nicely. I use the Massey L2007 plug-in as my hard limiter for mastering. For Rick And Morty, a lot of the orchestral stuff sounds so good just right out of the sampler that I don't tend to use too much EQ on the individual instruments themselves. But if I need to make something pop, or I need a little more rosin on the bow, I tend to go to the Focusrite EQ plug-in a lot, just because I know it pretty well."