The entire score for each episode is created, recorded and mixed at Elder's home studio — which is, depending on your point of view, a testament to how powerful digital recording and instruments have become, or a telling commentary on the budgets of even successful television shows. The design aesthetic of Elder's home studio could be characterised as dorm-room chic: a few posters and a couple of decorated skateboards hang on the walls, with guitars, basses and a cello near at hand. But otherwise, it's pretty utilitarian, with a Native Instruments Komplete Kontrol S61 keyboard controller and screens for his Pro Tools 12 HD system, and a couple of favourite outboard pieces in a rack, including a Universal Audio LA-610 MkII preamp/compressor. Virtually all of the recording is done direct; for the occasional acoustic instrument, Elder will pull out either an AKG C451B or C414 B-ULS microphone. There's no acoustical treatment to speak of, but Elder feels that none is necessary, really; he can reduce the contribution of the room by leaning in on his Mackie HR824 studio monitors or remove it by listening on his Beyer DT770 and Sennheiser IE 80S headphones. 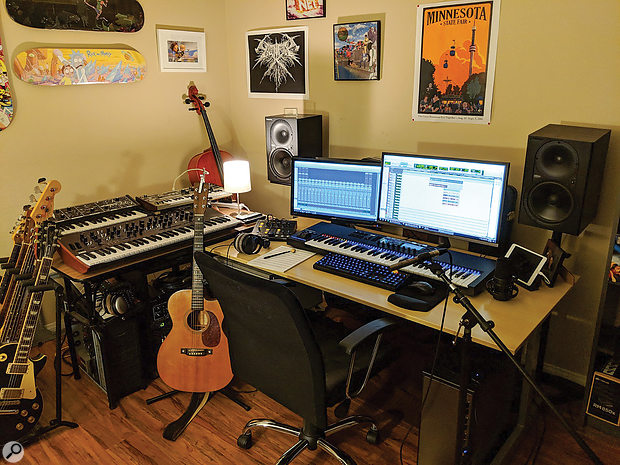 Like Rick's spaceship, Elder's recording space is pretty utilitarian, with a Native Instruments Komplete Kontrol S61 keyboard controller and screens for his Pro Tools 12 HD rig at the centre of the system.

"I know what I need to do a good job. All the rest is just distraction," he says. "If I had a wall-length modular system set up, it would make my studio look amazing. But I would, a, never use it because it's too slow, and, b, that's just money and time and effort and energy that I can put into learning how to make the samples, which are what I really end up using in the end anyway, learning how to manipulate those and make those sound great with what I already have. I guess I'm sort of like a studio minimalist. I like keeping things simple because the more stuff I have to choose from, the harder it is to make decisions."

Elder's approach to scoring each episode rarely varies. "I always start with an animatic: a storyboard to the audio dialogue track," he explains. "That usually has no music on it; maybe a few cues here and there that they temp with, but usually it's empty. I load that up into a Pro Tools session all by itself and that becomes my master video session that I then use to break into separate sessions that I refer to on a cue-by-cue basis. Then I watch the episode and spot it.

"I'm fortunate enough on this show that I get to decide where I want music to be. I tend to overdo it a little bit, because I'd rather mute something later than have to write a cue at the last minute. So I'll figure out where the cues need to be. I use this amazing website to do cue organisation called CueDB [a database that will store the cues along with information about the files they refer to]. I can't say enough good things about it; it helps you organise your cues with timecode ins and outs. The animatics have SMPTE burnt in, so I just sync that up to my Pro Tools session. Then, everything is locked in, and I write my cues to the actual timecode so that for the mix spotting, they have the timecode built into the file.

"After I'm done spotting it, then I've got my list of music cues to write. Sometimes I'll start at the beginning of the episode. Sometimes I'll start at the end — a lot of episodes have a big two-minute action sequence towards the end, and sometimes I'll start with that just to kind of come up with the themes for the episode that the episode ties together. I don't have a lot of thematic material that I use musically in Rick And Morty. It's not like a Peter And The Wolf situation where Rick has a theme and Morty has a theme and all that; it's more story-specific than it is character-specific. So, generally, I'm going for a sound and a mood first, and then the melodies come from that."

Out Of The Loop

"I deliver full stems of my music to [Santa Monica audio post-production studio] Margarita Mix, and they take those stems, and the audio, the dialogue, the sound effects, all the other audio you hear in the show, and they mix them there," he says. He also provides a stereo guide mix for spotting during the mix to picture, but the stems are what are used on the final, allowing basic volume adjustments for groups of instruments.

Individual songs, however, have taken on lives — and studios — of their own, like the Bowie-inspired 'Goodbye Moonmen' from the second season's 'Mortynight Run' episode. A friend's project facility (albeit one with 5.1 monitoring capability), Kent Verderico's Blue Ribbon Studios, hosted that recording and others. "We tracked the drums, and mixed and mastered that there," he says. "Sometimes, for these speciality cues, I will outsource the mix and master because I know they've got to really stand out in the episode, and 'Goodbye Moonmen' is a good example. Normally, when I get an [outside] engineer to mix and master something for me, I'll send them my Pro Tools session, and they'll do it on their studio and then send me back a two-mix." 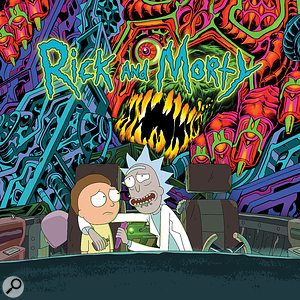 The hit soundtrack album features some very special guest contributions — but also a lot of Ryan Elder's own highlights.That kind of outsourcing has become embedded in the workflow for episodic television, given its schedule; in fact, the vocal for 'Goodbye Moonmen' was sung by Jermaine Clement of Flight Of The Conchords, who performed over an ISDN line from New Zealand while listening to a stereo mix of the track.

With a commission in place for at least 70 more episodes, Rick And Morty may turn out to be a career-spanning show for Ryan Elder. With that sort of success behind them, many composers would be looking to break into the movie world, but Elder feels that television is in a golden age, and he's very happy to stay within that milieu for the time being. "I'm a TV guy at heart," he says. "I did commercials for so long, and because of that my skill set is a little more jack-of-all-trades than the average composer, because when you're doing commercials, one day you have to do big-band jazz, the next day, you have to do hip-hop, and so on. So, I like to diversify what I'm actually working on. Rick And Morty is a great fit for that, obviously. But in terms of what I want to keep working on, I love TV. I think TV creatively is where the best stuff is being made right now. I like movies, but they're not remotely as creative to me as TV shows are.

"As you can tell from my studio, I'm a fairly simple guy, so I don't have Oscars or anything in my sights. I want to make great TV, and I want to help people tell stories in a way that's interesting. One of the things that I really love about working on Rick And Morty as a composer is that not a lot of composers get to work on projects that they actually would be fans of if they weren't working on it. With Rick And Morty, it's like the best of both worlds. I love the show. I would absolutely watch the show, four times each episode, even if I didn't work on it. But getting to work on it is just like icing on the cake, for sure."

Ryan Elder's bare-bones studio aesthetic reflects a broader philosophy. "I think the more choices you have, the harder making decisions is," he says. "I learned a long time ago [that] putting restrictions on yourself breeds creativity. I was always really inspired by Michael Giacchino, who did the soundtrack to [television series] Lost. He specifically limited his instrumentation, and had a very small ensemble that he could work with. He used a harp like he would if he had a full, giant orchestra, things like that. So the sound of that show comes from the fact that he was so limited, and it's such a unique score because of that. I've always been inspired by that. I like limiting my options because then I am forced to create something unique."