Q. How do I mike up woodwind instruments? Skip to main content

Q. How do I mike up woodwind instruments?

I'm going to be adding some woodwind parts to a track, recording flute, clarinet, alto and tenor saxophones one at a time. Can you offer any advice on how to mike them up? 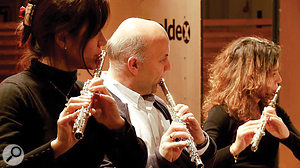 Technical Editor Hugh Robjohns replies: Unlike brass instruments, which emit sound solely from the bell and are therefore highly directional, the woodwind family emit sound from the entire length of the instrument, as the player covers or uncovers the finger holes, effectively lengthening or shortening the vibrating column of air within the instrument and changing the pitch of the note being played. As a general rule, therefore, you need to place the mic in such a way that it can 'see' the whole thing. This will usually mean a position about 18 inches away and about half the way down the length of the instrument. As always though, experiment and listen to find the optimal microphone position and angle for that combination of instrument, player and room. A condenser mic should give you the best results.

So for the clarinet, start about 18 inches away and at a height which puts the microphone about half to two-thirds of the way down the body of the clarinet. Try to stop the musician from swaying about, and adjust the distance, height and angle of the mic to optimise the tone and body of clarinet and minimise the key action and wind noises.

The flute presents a slightly different case, as it is held horizontally rather than vertically. Start by positioning the mic level with the flute's horizontal plane, halfway along its length and 18 inches away. Classical flute playing is often recorded with the mic placed slightly above the horizontal and at a distance of three or more feet away, while for more modern styles, the mic is sometimes placed less than a foot away for a more breathy, jazzy feel. Again, you should experiment to find the sound you're looking for. If you're recording in a small room with poor acoustics, putting the mic more than two feet away may mean you pick up more of the room sound than you want.

For the saxes, try a large-diaphragm condenser placed about 18 inches away and 'looking' roughly just below the halfway point of the body of the sax. You could also use a large dynamic mic for a slightly fuller, softer sound. Angling the mic downwards towards the upper rim of the bell can help to reduce how much noise from the keys is picked up — some consider it to be an intrinsic part of the instrument's sound, while others find it unsatisfactory.