Q. How do I record a hammered dulcimer? Skip to main content

Q. How do I record a hammered dulcimer?

I've offered to have a go at recording a couple of friends of mine who play as a duo. For some of the songs, one of them will be playing a hammered dulcimer, which is something I've never tried to record before — do you have any advice?

SOS Editor In Chief Paul White replies: Ideally, you need a stereo pair to give the sound some width and to help keep the volumes even across the strings. I usually place a pair of small-diaphragm, cardioid capacitor mics above the instrument, spaced by about two-thirds the instrument's width and around 500mm above the strings. Large-diaphragm models also work fine. 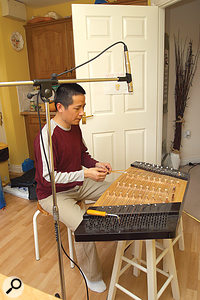 You can't mic a hammered dulcimer too close because of the way the instrument is constructed and where the sound comes from — you'll lose the balance between the different strings. This means that, with this particular instrument, you need to be especially careful of spill.

You need to keep other sounds away, though, otherwise you'll pick up a lot of spill; you can't mic much closer without upsetting the string balance and changing the tone. Spaced omnis would also work if the recording is an overdub being done in a sympathetic room where spill is not an issue. I know some players use contact mics for live work, so if you are recording at the same time as other loud instruments, it could help to take a feed from a pickup as well, just in case the overhead mics pick up too much spill. You may even be able to blend the contact mic and the overheads, as long as you compensate for any phase problems that might arise by time-aligning the waveforms and checking their polarity in your DAW.