Q. Should I apply an effect to the whole mix, or use effects on each track? Skip to main content

Q. Should I apply an effect to the whole mix, or use effects on each track?

Does sending multiple instruments to the same effects track (reverb/delay) have a different effect on the overall mix from applying effects to each individual channel? What is the best way to apply lots of effects to tracks whilst saving CPU?Also, how does this work in terms of mixing multiple tracks through one compression effects track?

SOS Reviews Editor Matt Houghton replies: If I had a pound for every time I've been asked this question I'd be a rich man!

Let's start with reverb and delay: I'll discuss reverb, but the same principle applies to delays. It's worth pointing out that only recently, with plug-in-based DAWs and powerful computers, has it really become possible — at least without being a millionaire — to run separate reverbs on every channel. In the days of yore, almost all reverbs would have been set up as send effects. Partly, that was down to the cost, but there were some practical and sonic benefits to this approach too. Firstly, using reverb as a send effect meant it was quick and easy to adjust the wet/dry balance of things, either using the aux send knob on each source channel, or using the fader on the effects return channel, depending on whether you wanted to adjust the balance of one source or the whole mix. Secondly, you could leave reverbs patched into aux sends, so that your favourite reverb unit was always easily accessible to each channel, without needing to re-patch. Thirdly, if the aim is to gel different sources together, you probably want them to sound like they're in the same space, so it makes sense to share the same reverb. And, finally, separating the reverb and the source track allows you to further process the reverb signal, with filters or other processors, before mixing it back with the source. 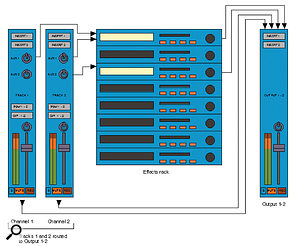 An efficient way to route effects is to send multiple channels to the same effects processor.

However, it's also quite common for some sources to have their own dedicated reverb. A snare drum, for example, might be sent both to an overall ambience or drum-room reverb, as well as to its own dedicated reverb. In this situation, you could use a reverb as an insert or as a send effect, and if you wanted the snare reverb to be processed along with the snare (or the rest of a drum group), you'd route the snare reverb's return channel to a group/bus track along with the snare, or all of the drums. Another possibility is that you simply want to thicken up a weedy sound using a short ambience patch and, again, you can use either approach here. So, in short, it's perfectly acceptable to use a reverb either as an insert or as a send, but the send approach is much more common, and for good reason.

When it comes to EQ and dynamics processors, such as compressors, gates and limiters, this situation is reversed. In other words, they'd normally be used as inserts, to sculpt sounds and manage their dynamic range so that they better fit the mix (which is why some high-end consoles feature EQ and compression on every channel). Again, though, there are occasions when you might want to use them as sends, the most common of which is when you want to perform parallel compression. Some compressors feature a wet/dry, or 'blend', control for exactly this purpose, but you have more flexibility by using a compressor as a send effect, because you're able to EQ the return signal again before blending back with the source. This technique is fairly commonly deployed on a drum bus, sometimes with a slight 'smile' EQ in series with the compressor. If you want another, more extreme example, producer Michael Brauer reportedly mults out vocals to several different compressors in parallel to get the effect he wants.

Of course, it's also perfectly acceptable to use processors such as compressors on bus channels without doing any parallel compression. That's known as 'bus compression' and is typically done to 'glue' or 'gel' things together. You'll often see that done on a drum group bus or on a master bus, and if that's a technique that you're interested in I'd recommend reading the feature in SOS May 2008 (/sos/may08/articles/mixcompression.htm).

If you're working in a digital environment, like a modern computer-based DAW, it's worth a quick word about latency compensation. Most DAWs now include automatic plug-in delay compensation, and this is essential when doing parallel compression, as the delays will otherwise cause unwanted phase-cancellation. It's not really an issue for reverbs, though, where any delay can be compensated for by reducing the reverb's pre-delay.