Q: How do you connect a mixer to a PC? Skip to main content

Q: How do you connect a mixer to a PC?

Referring to your article in Q&A from SOS January 2007, regarding a basic home recording setup, can you connect the Yamaha MG102C, which you suggest, to a PC directly? If so, how? 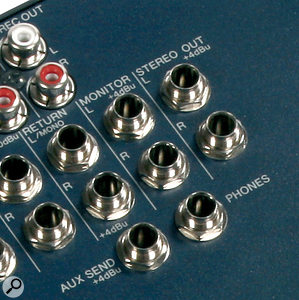 The output section of a mixer may have a number of different connectors (this Yamaha MG102 only uses jack sockets), so you'll need to have the correct cable to interface with the PC input. Via email

News Editor Chris Mayes–Wright replies: To get the audio from a mixer (or any source) directly into a computer, you'll need some kind of audio interface — also known as a soundcard. It's likely that your computer has an 'on–board' soundcard, and yours may have line and/or microphone inputs on mini-jack connections. If this is the case, you can simply plug the outputs of the mixer (in this case either the Stereo Out, Monitor, Rec Out or Aux Send) into the input of your on–board soundcard. You'll obviously need a cable with the relevant terminations. If connecting from the quarter–inch jacks of the MG102C to a mini–jack line input of your PC soundcard, you'll need two mono quarter–inch jacks on one end of the cable and a stereo mini–jack on the other. From here, almost any audio recording package should be able to 'see' the incoming audio.

An alternative would be to purchase an external audio interface, and you can get these from around £50. Not knowing your specific requirements, I can't really recommend one that will best suit your needs, so I suggest visiting our on–line Forum, www.soundonsound.com/forum, where you can post questions.