Q. How do you make a Reflexion Filter more stable? 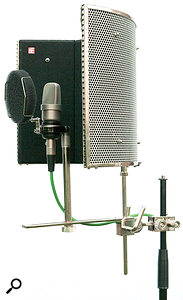 1. A Reflexion Filter assembled according to the manufacturer's instructions. The centre of gravity is quite some distance from the supporting mic stand pole.I'm writing to you in an attempt to discover the genius of reversing the fittings of an sE Reflexion Filter, as espoused many times in the superb Studio SOS features by Paul White and Hugh Robjohns. I have struggled with this very impressive tool since it was first marketed and have had to contend with a drooping or toppling stand on many occasions.

SOS Technical Editor Hugh Robjohns replies: The sE Reflexion Filter is a very useful and effective tool for home and project studio recording applications, but in our opinion the mechanical design of its mounting hardware is not very clever, and makes the assembly potentially unstable when used with the most common variety of mic stands. 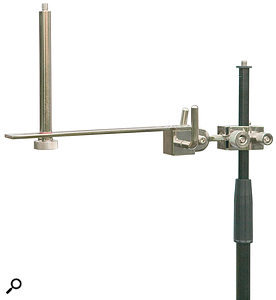 2. Start by part‑assembling the hardware.The basic problem is that, as designed, the entire system is intended to be supported by attaching one end of the mounting hardware to the mic‑stand pole. The Reflexion Filter ends up being mounted on its spigot about 100mm away from the stand pole, and the microphone on its post about 300mm away. The result is that all the weight — and, more importantly, the centre of gravity — ends up being a considerable distance away from the mic stand pole, which is an unstable configuration. Unless great care is taken to position one leg of the stand directly under the axis of the Reflexion Filter mounting hardware, the whole assembly is likely to topple over, and the microphone will probably be damaged as a result. 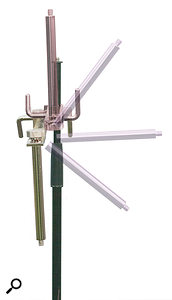 3. Invert the microphone slide bar...As part of the Studio SOS make-overs, Paul White and I have installed lots of Reflexion Filters and have evolved an alternative mounting technique that we think is safer and more practical. Picture 1, bottom left on the opposite page, shows the Reflexion Filter constructed as the manufacturer intends. I have rigged it on the main vertical pole of a conventional boom‑arm stand and attached a Microtech Gefell M930 large‑diaphragm microphone with a Microfonen pop shield.

1: As you can see, the centre of gravity of the assembly (which is roughly midway between the Filter and microphone posts) is a considerable distance from the supporting mic stand. The reason I've used the M930 is that it's the lightest large‑diaphragm mic I own. I didn't want to risk a heavier, more conventional vocal mic with the Reflexion Filter configured in this way! 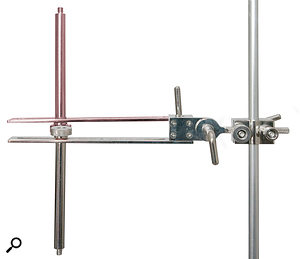 4. ... so that the support pole points downwards.Ideally, the mounting hardware should be completely redesigned to position the entire assembly's centre of gravity over the centre of the mic stand itself, but in the meantime, a very simple and practical work‑around is to modify the mounting arrangements to achieve a similar end result. It's not a perfect solution, but it is a great improvement and one that provides considerably better stability. 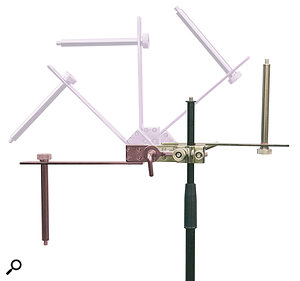 5. Loosen the pivot lever on the mic slide and and rotate the slide and pole up and over 180 degrees.

6. Now you can begin to attach the Reflexion Filter by inserting its spigot into the slide base.2: As picture 2 shows, the first step is to assemble the hardware as the manufacturer's instructions indicate. The clamp is placed around the mic‑stand pole with the knurled spigot of the slide bar inserted into the appropriate hole in the clamp. The slide bar is (initially) orientated horizontally, with the microphone pole upright. Normally, the spigot extending from the bottom of the Reflexion Filter would then be inserted in the appropriate hole at the mic‑stand end of the slide bar.

3 & 4: Instead of mounting the Filter at this stage, invert the microphone slide bar by loosening the locking lever on the stand clamp. With the slide bar upside down (and with the mic support pole now pointing straight down), re‑tighten the locking lever. 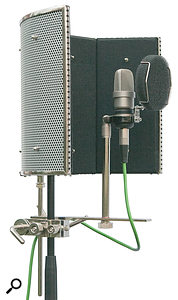 7: That's it: job done. The whole assembly should now be far better balanced, with its centre of gravity much closer to the microphone stand pole itself. This solution works best on a mic stand without boom‑pole attachment, but it is still perfectly possible with the boom pole in place if you're careful.