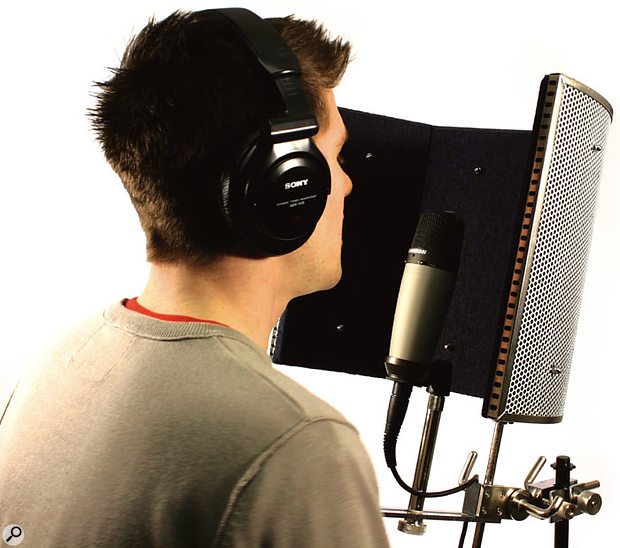 sE Electronics' portable screen is designed to turn any room into a vocal booth.

The Reflexion Filter, from mic manufacturer sE Electronics, is a compact and portable acoustic absorber, designed primarily to reduce the amount of room ambience picked up by a microphone during recording. It may also assist a little in isolating the mic from other sound in the room, such as the noise from computer fans or spill from other performers. The Reflexion Filter can be fitted behind almost any microphone by means of the included stand clamp assembly, which also incorporates a support for your mic or shockmount. This means that you require only a single mic stand to hold both the Reflexion Filter and your microphone, but as the assembly can end up being quite heavy, it is important to set up the stand so that the weight is evenly distributed over its base.

To achieve a worthwhile amount of acoustic absorption within a limited thickness, the Reflexion Filter comprises six main layers, contained within a punched-aluminium frame that allows sound waves to pass through it while adding some useful diffusion. Once it has passed through the holes in the aluminium, the sound encounters a layer of absorptive wool followed by a layer of aluminium foil, which absorbs more energy. Behind this is an air space, kept open by rods passing through the various layers, followed by a further layer of wool. Additionally, there are four pieces of specialist acoustic absorptive material attached to the inside face of the structure, which further absorb and diffuse sound.

The stand assembly comprises a rather heavily engineered mic stand clamp that attaches by means of an adjustable block to the horizontal bar supporting the Reflexion Filter and the threaded post that holds the mic. This can be slid along the support and then clamped to provide plenty of flexibility for mic positioning. Although it does ensure a stable mounting, personally I felt this part of the design was slightly heavier than it needed to be.

If you've read any of our articles on recording in an untreated room, particularly vocals, you'll probably know that we recommend always putting some absorbent material behind the singer. Most home-studio musicians record using cardioid-pattern mics, so most of what ends up in the mic is a combination of the direct sound from the singer plus whatever is reflected from the wall directly behind them. Why, then, would you want to put something like the Reflexion Filter behind the microphone? 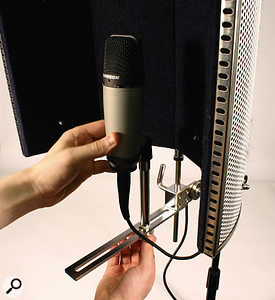 The Reflexion Filter is designed to attach to the same stand as your vocal mic.Firstly, if the singer works close to the Reflexion Filter, the sound will still be picked up as normal by the microphone but a lot less of the acoustic energy will be able to escape out into the room. This in turn reduces the energy of the reflected sound, which helps dry up the recording. Secondly, even cardioid mics pick up a significant amount of sound from the sides, so placing a cardioid mic within the curve of the Reflexion Filter will help keep out room reflections approaching from the side.

Depending on how good, or otherwise, your room is, you may be able to make a perfectly acceptable vocal recording using just the Reflexion Filter to control the acoustic environment, but my own approach would be to combine the Reflexion Filter with some improvised absorption behind the singer — which could be as simple as a suspended sleeping-bag or duvet. This would help absorb any of the voice that managed to reflect after getting past the filter and would also prevent sound sources elsewhere in the room reflecting from the wall into the live side of the microphone — for example, computer fan and drive noise. With the Reflexion Filter screening off the rear and sides of the mic, this should lead to a significant improvement in both the acoustics and the amount of unwanted room noise entering the microphone.

Another valuable application is to use the Reflexion Filter to de-sensitise the rear of a figure-of-eight microphone, such as one of the many ribbon mics now on the market. It could also be used to allow acoustic guitar recordings to be made more effectively using omni-pattern mics rather than cardioids, as these tend to produce a more open sound and they are less critical of positioning. According to the measurements made on behalf of the designers, the construction of the filter minimises any acoustic coloration, with variations of around only 1dB being typical. This is good, as the last thing you want is for an acoustic screen to significantly change the tonal character of your favourite microphone!

The Reflexion Filter absorbs acoustic energy with impressive effectiveness; you only have to stick your face up close to it and speak to hear that. On its own, it makes a valuable contribution to improving your recordings by reducing the amount of reflected sound getting into the microphone, and it can be used in different ways when recording instruments to improve separation and to reduce room tone. For my money, it still produces the best results when used with some absorption behind the performer, which makes perfect sense as each tackles a different type of sound-leakage, so by combining them, you really can make great recordings in a typical bedroom studio. Whilst the Reflexion Filter scores in minimising the level of off-axis sound reaching the microphone, the duvet behind is most effective at preventing reflections reaching the front of the microphone. 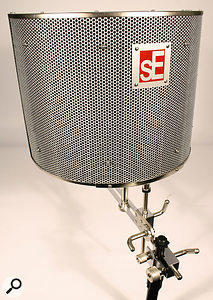 The optimum mic position relative to the filter is to get the capsule lined up with the centre of the filter and to have the mic sitting just within the curve of the filter, leaving plenty of space between it and the filter wall. If you place the mic further into the filter, the sound dries up more, but may change slightly in tonality. This can be used constructively when recording electric guitar cabs and suchlike, although in my experience, the amount of spill you get when close-miking guitar amps with a cardioid mic is negligible anyway. Perhaps if you were using a figure-of-eight mic, such as a ribbon model, at some distance from the cabinet, the use of the Reflexion Filter would make more sense.

Exactly how much difference the filter makes rather depends on how well behaved your room is. If you already have some acoustic treatment in place or you have lots of soft furnishings, you may find that it makes less of a subjective difference than you might expect, but it becomes very obviously more effective in less friendly environments such as an untreated room or village hall. So long as you don't set back cardioid mics more than an inch or so from the mouth of the Reflexion Filter, the amount of coloration is minimal, but my tests with omni and figure-of-eight mics suggest that you need to take a little more care with the positioning of these. Putting the mic too far back will change the sound quite noticeably, although the reduction in spill and room tone is also far more significant. The figure-of-eight mic I used sounded best when placed a couple of inches in front of the filter opening.

With cardioid mics, the Reflexion Filter seems able to achieve very little improvement in the rejection of fan noise from a computer at the other side of the room, unless you have a further absorber of some kind directly behind the singer (to be fair, that isn't what it was designed to do), but with omnis and figure-of-eights, the drop in noise is quite noticeable.

Does It Really Work?

Those recording in less-than-ideal recording environments have been looking for a 'magic bullet' quick fix for recording vocals since the term 'home recording' came into being, and the sE Reflexion Filter represents a serious step in that direction. It can't keep all reflected sound out of the mic, as some will end up bouncing into the mic's frontal axis from the wall behind the singer, but it certainly reduces this by minimising the amount of voice making it out into the room and by attenuating off-axis sounds. This could be particularly useful in a typical studio vocal booth where there is often a glass door directly behind the microphone.

If rear-wall reflections are still a problem for you, some thick blankets, duvets or similar behind the singer should bring about the desired degree of improvement, and in combination with the Reflexion Filter should allow anyone to record clean vocals that are free from damaging room coloration. The price of the Reflexion Filter could actually be said to represent extremely good value when you consider that it might well make more difference to the subjective quality of your recordings than blowing an extra grand or two on more sophisticated mics and preamps!

I took home a Reflexion Filter from this year's Sounds Expo show, as I had been searching for just such a product for the last few months. I am in the middle of producing a new radio series about record producers for BBC Radio 2, and needed a way of turning my home-made vocal booth, which works really well for lead vocals, into a 'radio'-style voiceover booth, to get that extra-close 'in your face' radio voiceover sound.

I was due to record the first of the voiceovers with Radio 2's Richard Allinson the next morning, as well as a few links from yours truly. The sE filter performed brilliantly — if you move your head toward the filter panels whilst speaking, you can hear the immediate effect of 'drying out' all of the room sound. The end result was exactly what I needed: dry, clean and in your face! My first lead vocal proved to be equally successful and the vocalist commented on how good he thought his voice sounded that day!

Next up I thought I would try it on some guitar overdubs. I have one of the tiny Brian May Vox amps, which cuts really well in a track, especially if the other guitars all have a 'Marshall'-based sound. Removing the screen from the standmount and placing it on the floor next to the front of amp, I used the Reflexion Filter as a mini-gobo, which made the guitar sound as if it was about half an inch from your face. Even when I added a touch of 'room reverb' from one of my DM2000's plug-ins, the sound was exactly as you would imagine — little amp, but now in a little room!

In my view this product really makes it that bit easier to get a 'pro-studio' sound at home. Steve Levine

To date there are no direct alternatives to the Reflexion Filter. There are foam products available that clip behind the mic with a view to improving separation, but these aren't really trying to do the same job, and their much lower mass makes them far less effective at low frequencies. In fact, the only real alternative is the improvised acoustic treatment we often recommend, where the singer is positioned with a V-shaped corner behind them made from two heavy duvets that absorb sound from the sides and reflections from the wall behind. Even then, the Reflexion Filter is likely to be better at reducing off-axis sound pickup, because of its proximity to the microphone.

Ironically, the Reflexion Filter makes the biggest difference in the worst rooms. And it can make a big difference, but any product like this can only achieve a certain amount; in my view, additional absorptive material (even if it's only a duvet or heavy blanket) behind the singer should still be considered mandatory. If you combine the two approaches, you should be able to record adequately dry vocals in almost any environment.