Q. How does parallel compression work? Skip to main content

Q. How does parallel compression work?

Parallel compression is something I'm just beginning to explore. It's not something I've used much in the past, but I'm seeing its potential for beefing up groups and whole mixes. However, if I set up a compressor on a send channel, rather than processing the whole signal via an insert effect, won't I get phasing? Also, if I set up compressors on several send channels and filter out certain frequencies on each channel (for example, roll off everything but the low‑mid range on one, roll off everything but the high‑mid range on another), then wouldn't this just be the same thing as multi‑band compression?

SOS contributor Mike Senior replies: The answer to your first question is pretty simple. If you implement parallel compression by setting up the compressor as a send effect (a pretty common choice of routing), you'll only get phasing between the unprocessed and processed signals if the routing or processing introduces a time delay between the two audio streams.

In practice, whether such a delay is created depends on your mixing system, though. In the analogue domain, compressors don't introduce delays, so you're unlikely to have a problem there. In the digital domain, however, compression algorithms often impose some kind of processing delay, which is where phasing can creep in. Fortunately, if you're working in software you'll find that most major sequencing packages now have sophisticated plug‑in delay compensation that shifts the signals back into line to accommodate processing delays, neatly avoiding any phasing problems. If you're working in most hardware digital mixers, though, this facility won't be available, so you either have to compensate for the compressor's delay manually somehow, or try some other kind of workaround. (I used one such workaround in the July 2008 Mix Rescue column. If you'd like some more detail about this, read the article on‑line at /sos/jul08/articles/mixrescue_0708.htm.) 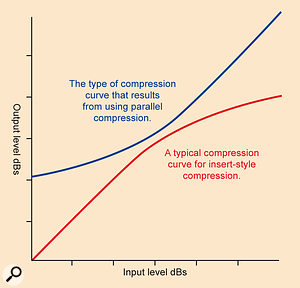 In this diagram, you can see what happens with insert‑type compression: the loud parts of the input signal are turned down. By contrast, when you use parallel compression the quiet parts of the signal are effectively turned up.The short answer to whether a number of filtered parallel compressors effectively gives you multi‑band compression is no, but the reasons for this answer are a little complicated. The first reason can be appreciated even for full‑band processing: the end result of parallel compression is that it effectively creates a compression‑ratio curve that bends in the opposite direction to that of a normal insert compressor, boosting low‑level signals but leaving higher‑level signals comparatively untouched. (Compare that to the action of an insert compressor, which pushes down peak levels and leaves low levels comparatively untouched.) It is partly this different compression curve that gives parallel compression its characteristic sound. As far as the compression‑ratio curve is concerned, the situation doesn't really change when you move to multi‑band processing, as multi‑band compressors tend to have similar ratio curves to their full‑band counterparts.

But even if the ratio curves created were the same, there is another reason why multiple filtered parallel compressors wouldn't respond in the same way as most dedicated multi‑band compressors, and that is that many multi‑band designs allow some interaction between their compression bands, so that if one band is compressing particularly heavily, the neighbouring band will also begin to compress a little in sympathy. This design feature can help to reduce one of the common processing side‑effects of multi‑band compression, namely that it tampers unmusically with the overall tonality of the sound being processed. Although linking the compression in adjacent bands reduces the amount of independent control available, it does tend to make adverse tonal fluctuations sound a bit less obtrusive in practice.

Multiple parallel compressors won't interact in this kind of way, and may be more inclined to introduce tonal problems with heavy processing. That's not to say that filtered parallel compression isn't a valid technique, though, because precisely those differences between it and more traditional multi‑band compression can be very useful on occasion — for example, to increase high‑frequency density in a track without stamping on the spikes of fast attack transients.