Q. Why can’t I get the right Guitar Rig sounds in Pro Tools?

SOS reader Gordon Staines of Cheshire emailed us because he was having difficulty using NI's Guitar Rig 3 with his Pro Tools M‑Powered setup. Using NI's Rig Kontrol USB interface and controller, with Guitar Rig 3 running in stand‑alone mode, he was able to get exactly what he wanted from it, "no latency, and it sounds great live just plugged into the phono inputs on my Marshall AS100D acoustic amp, of all things, or even when I just have the headphones in the controller for practicing. My problem is getting the same sounds out when laying down tracks.”

The Rig Kontrol interface can't be used directly with Pro Tools M‑Powered, which will only recognise and record from M‑Audio hardware. Gordon's recording setup is thus based around the M‑Audio Project Mix I/O, a Firewire device which is both a multi‑channel audio interface and MIDI controller. "The problem has been an ongoing one,” explained Gordon. "When I plug my guitar into the desk, I set levels correctly, the input into the mix window has no peaks at all, and bringing up the GR3 as a plug‑in, all levels are fine through that too. But when I start playing, GR3 just does not sound the same at all coming back into Pro Tools. The clean tones are verging on distortion, the SRV tones are just wishy washy, and the whole thing sounds like a really shoddy, cheap guitar effects processor. There's latency going on too. I even tried the new Digidesign Eleven Free, and that still has latency issues. 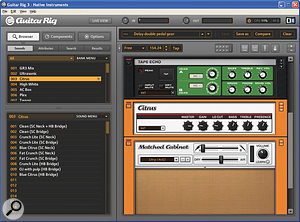 SOS reader Gordon couldn't get Guitar Rig 3 sounding right through his recording software, even though it sounded great 'live'. A couple of simple routing mistakes and a less‑than‑ideal buffer‑size setting turned out to be the reasons for the problem."So two problems really. One is the latency for the guitar software via Pro Tools, but most importantly, how do I get the GR3 sounds sounding like they should back through the recording software?”

As Gordon suspected, the two problems were actually separate, and required a little troubleshooting to sort out. The latency issue, it turned out, was simply down to different buffer size settings. The Rig Kontrol was happily operating at a low latency, but with the Project Mix I/O, Gordon had followed advice to raise the H/W Buffer Size setting in Pro Tools. This can help with CPU load when running a lot of RTAS plug‑ins at the mix, but results in a corresponding increase in latency. I suggested experimenting with the H/W Buffer Size parameter, and Gordon reported that "I changed the buffer size down to 256 for recording purposes, then upped it for the playback, and all was good.”

The other issue was the guitar sound itself, and here two possibilities sprang to mind. First, the input sockets on the Rig Kontrol provide a high input impedance suitable for directly connecting an electric guitar. The Project Mix I/O likewise has a high‑impedance input, but I wanted to check that Gordon wasn't plugging his guitar into one of the conventional line‑input jacks, which have a much lower input impedance and can rob a DI'd guitar of its sparkle.

The second possibility that occurred to me was that Gordon might accidentally be 'double monitoring' the input. Pro Tools M‑Powered doesn't offer automatic control over the direct monitoring features within M‑Audio interfaces, and it's easy to accidentally end up in a situation where direct monitoring is enabled, yet you're also hearing the input via the record‑armed track in Pro Tools. In Gordon's situation, this would mean he was hearing the guitar signal twice, one processed by Guitar Rig within Pro Tools, the other routed directly through the hardware and thus clean‑sounding. To find out if this was the case, I suggested that Gordon mute the input within Pro Tools and check whether he could still hear clean guitar coming through the Project Mix I/O.

As luck would have it, both possibilities applied. "The Project Mix has an instrument input at the front, but I was plugging directly into the line‑in on the channel strip,” said Gordon, "so I plugged the guitar into the instrument jack socket at the front of the Project Mix. Muting the channel in Pro Tools, I could still hear the direct input, so I opened up the Project Mix control panel. In the Output tab you have headphone and direct monitor tick boxes, so I un‑ticked the direct monitor bit. The key is that you still won't hear Guitar Rig 3 until you have placed the channel into record ready mode, but the sound is just what's coming out of the software and not from the guitar. Mission accomplished!” Sam Inglis

Will Gregory: My Favourite Synths
6 days 6 hours ago.