Q. Is a matched pair of mics necessary for stereo recording? 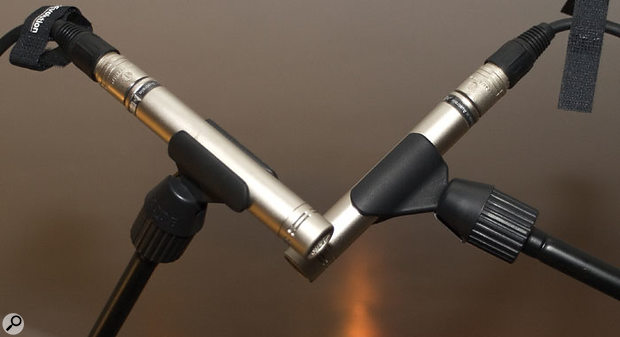 Even small differences in the polar pattern and frequency response of the two mics in an X-Y pair will have an adverse effects on stereo image. Using a matched pair — these are Rode NT5s — is recommended.

If you try to use two different mics for X-Y coincident stereo recording, the inevitable result will be an unstable and ill-defined stereo image that appears to wander about, with different instruments affected in different ways. This isn't a subtle effect, either — it takes very little difference between the two mics to make this a serious problem. This is precisely why the high-end mic manufacturers go to such trouble to maintain tight tolerances in producing matched pairs, and why companies producing more affordable mics offer hand-selected matched pairs.

If you want to check the compatibility of two cardioid (or any other directional pattern) mics, try this simple experiment. You'll need stereo monitoring, a mixer and somewhere to set the mics up where an assistant can walk around them while you listen to the monitoring output in isolation — a studio with a separate control room would be ideal.

Place your two mics above one another with the two capsules facing forward along the same axis and as close together as you can get them. Plug one into the left channel of your mixer and the other into the right channel, pan them hard left and right and match their gains exactly.

The easiest way to do this is to get someone to stand in front of the mics and talk. Meanwhile, you select the mono button on your monitoring and reverse the polarity of one of the mics. Fade up the first mic and set the gain to a sensible level to hear the speech. Then as you fade up the second mic some cancellation should occur as the polarity is reversed. Adjust the second mic's gain to achieve the deepest cancellation null. Now you can remove the polarity inversion and cancel the mono monitoring. You should now hear the speech coming from mid-way between the two speakers as a phantom centre image.

Now ask your assistant to walk around the mics, in a circle, keeping roughly the same distance from the capsules and facing them all the time as he or she walks around. If the mics are perfectly matched, the image will not move from the centre line, although the level will obviously vary as the assistant moves around to the rear null of the cardioids, and then back towards the front around the other side.

With two dissimilar (or poorly matched) mics, what you will hear instead is the image wander or flick about, often with different frequency components appearing to come from different places — sibilants from the left and fundamentals from the right, for example. The image will sound unstable and poorly defined.

Exactly the same kind of imaging inaccuracies will occur when the mics are rotated to face left and right as in a conventional X-Y stereo pair, resulting in a poorly defined, blurry image — definitely not a good stereo recording!

Spaced mic arrays aren't quite as critical in terms of mic pattern because level differences caused by the polar pattern don't play as large a role in defining the stereo image. But you will still suffer from strange and unstable imaging if they have different frequency responses.

The only stereo technique that deliberately uses different mics is the coincident M&S array — but that requires that one mic have a figure-of-eight pickup pattern. Even so, it is important that both mics have similar frequency responses if the imaging is to be accurate. In this case, though, poor matching results in unstable width problems, rather than image shifts, which is probably less audible.